Why does cold air feel even colder when you are moving through it quickly?

My question is the following: Why does it feel colder (i.e. why does your body transfer more heat to the surroundings) when you are moving through the air at a high velocity, f.ex. when you are driving a motorcycle? Logically, temperature is a measure of the average kinetic energy of air. When you drive faster, the air is moving at a higher velocity relative to you, so the average kinetic energy with respect to your moving frame of reference should increase as well. Why wouldn't the air "feel" hotter in this scenario, and why does the opposite happen?

I wrote an answer to a related question on the Gardening site. I will re-use some of the words from that answer here:

First important thing: heat moves from warm to cold; and the greater the temperature difference, the faster heat moves.

Wind chill is used to describe "feels like" temperatures - recognizing that when a wind blows, the air "feels" colder. Here is what is actually going on:

Objects lose heat through a number of mechanisms:

In all these cases, heat moves from a hotter body to a colder body. Now when a body generates heat (like humans and other mammals), the rate at which you generate and lose heat must balance. We can sweat when we are hot (increase evaporation) or shiver when we are cold (increase heat production). How efficient these mechanisms are depends on several things. Convection and evaporation depend strongly on air flow.

When there is no wind, you will (slightly) warm up the air around you which then acts as a "blanket". Wind keeps replacing the warm air with cooler air, meaning you lose heat more quickly (because heat loss is proportional to the temperature difference). Wind chill is used to describe how this "heat stripping" affects warm bodies more strongly when the wind is stronger. It's not that an object will cool below ambient temperature due to the wind - just that it will lose heat more quickly. This is important for mammals who try to stay warm: if you lose heat faster than you can make it, you will eventually succumb to hypothermia.

Engineers use something called the h factor to describe this phenomenon. When you have a surface at temperature $T_1$ in contact with a fluid (which could be air) at temperature $T_2$, the rate of heat exchange across the interface is given by

The coefficient $h$ for air is a function of air speed, as given by this graph: 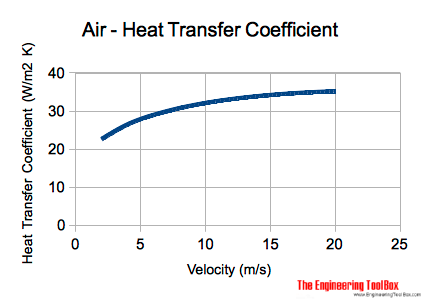 The curve at very low air speeds depends on many factors like surface texture - but the trend clearly shows that "faster air flow leads to faster heat transfer".

For evaporation, the situation is a bit more complex still. Evaporating water actually "draws heat" from the surface. This is because not all molecules move at the same speed - and it's the fastest molecules that have the best chance of escaping. When the smartest person leaves the room, the average IQ in the room goes down a bit; when the hottest molecule in the liquid leaves, the rest of the liquid becomes a little bit colder.

This effect is more significant when the relative humidity in the air is low, because once relative humidity reaches 100%, moving the air around doesn't expose the surface to "drier" air. However, since the saturated vapor pressure of water drops very quickly with temperature, the rate of evaporation (and therefore the rate of heat loss due to evaporation) is much less when temperature is lower.

In summary: warm bodies (significantly warmer than the environment) will lose heat more quickly when there is a wind blowing. A cold (unheated) body will NOT, however, cool down all the way to the "wind chill temperature".

It's because the relative motion of the air and your skin induces evaporative cooling. The mechanism is very particular to certain species of mammal and is not a fundamental physical process. If you wave a thermometer around through the air, it doesn't register a lower temperature.

1
Why do we feel cold when we switch on the fan?

6
Why does Joule heating not occur when no current flows through a conductor?
58
Why does cold metal seem colder than cold air?
4
why do metals feel cold when electron moves at Fermi velocity?
3
Why does water get significantly colder while falling through the air?
0
Are you warmer or colder when there's too much dead air insulation?