Throwing a Football. Is it truly parabolic?

Driving into work, I started thinking about the arc of something being thrown and was puzzled about how gravity's affect is squared per second for falling bodies. Intuitively that implies the shape would be "like" a parabolic shape. But I'm curious if it truly is parabolic. Doing some googling, I've found some rudimentary explanations that remind me of explanations I received in algebra as a kid (such as http://entertainment.howstuffworks.com/physics-of-football1.htm)

My confusion is around the idea that gravity's effect on falling bodies (reference http://en.wikipedia.org/wiki/Equations_for_a_falling_body) is increased over time. If this is the case, then wouldn't this affect the arc in such a way that it's longer on the release end and curves downward faster at the end? This might not be as noticeable for short distances, but intuitively it could play an important role in longer distances.

In other words, my question is pretty simple, as soon as something is thrown (shot, projected, etc) is it considered a falling body. Either way, is the arc or path truly parabolic, or is the path elongated on the throwing end and curve downward faster at the end? If it is truly parabolic, can you please give a clean explanation as to why the effect of gravity over time doesn't apply? If my intuition is correct about it being elongated, can you please share a useful reference as well?

A couple of assumptions:

Can we formulate an equation for the path (Reference: https://en.wikipedia.org/wiki/Ellipse)? I'm hoping for an answer that explains how the foci positions, and sum of red and blue line (need editor to give technical name) change in relation to changes in the direction and magnitude of the initial vector. 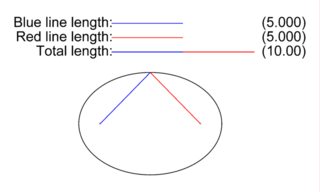 Many sources may tell you, that the path of a trajectory is a parabola. Indeed, all of the mathematical formula and calculations dealing with trajectories of objects falling, thrown or propelled support that interpretation. But when dealing with earth satellites and ballistic missiles, the truth is that their orbits are portions of ellipses.

The Newton's canon on a Mountain

Newton's cannonball was a thought experiment by Isaac Newton used to hypothesize that the force of gravity was universal, and it was the key force for planetary motion. 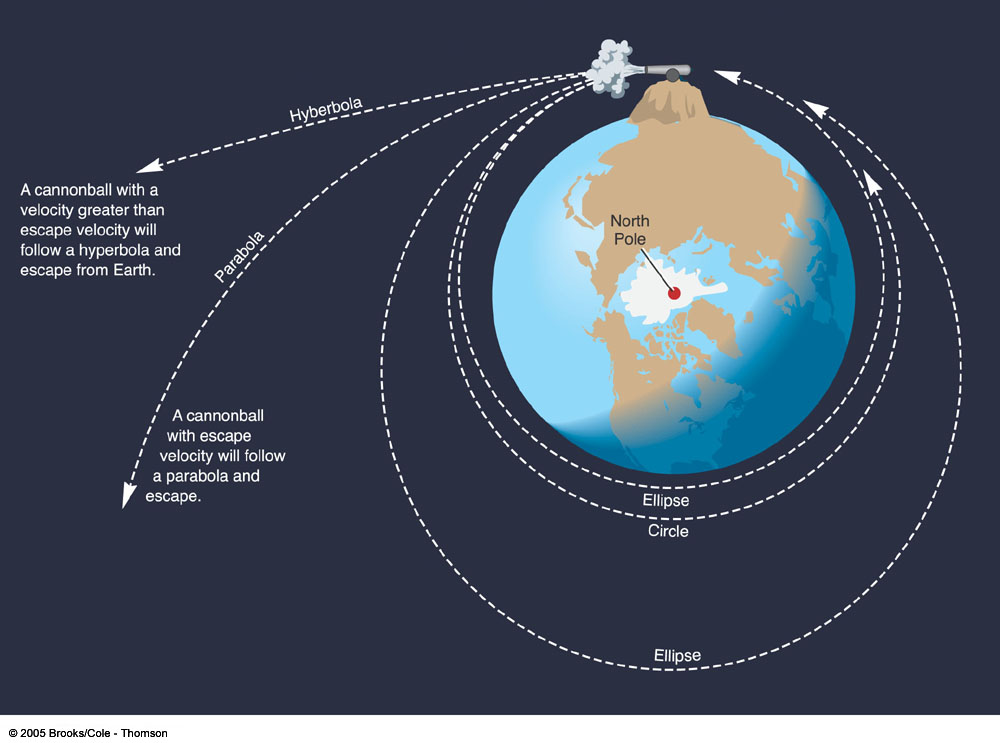 Here is an interactive version of it: Newton's Cannon on a Mountain

The parabolic paths become flatter and flatter as the cannon is fired faster. Newton imagined that the mountain was so high that air resistance could be ignored, and the canon was sufficiently powerful.

PS: Newton's mountain was impossibly high but he realized that the moon's circular path around the earth could be caused by the same gravitational force that pulls cannonball in its orbit, in other words, the same force that causes objects to fall.

The answer to your question is that the path of football is truly "elliptical" since its velocity is way less than escape velocity. But to us, we "approximate its path to a parabola".

UPDATE: Mathematical answer to your question.

We can use equations of projectile motion as follows. 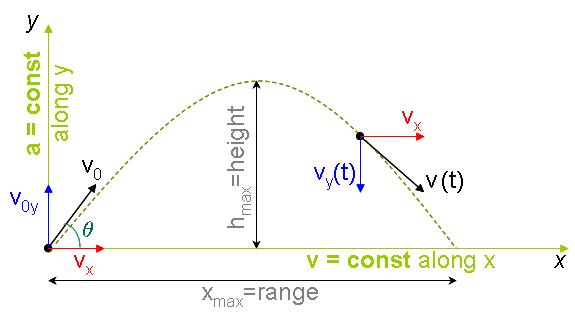 Equation for the trajectory of a projectile motion:

Now from your question we can have to situations:

CASE-1: When the object is thrown inclined at an angle $\theta_1$ with a velocity $u$

Then the maximum height the object will reach is given by:

Then the maximum Height the object will reach is equal to:

Now using the same angle and velocity, if we calculate the maximum distance traveled(called the range of projectile) we have

CASE-2: When the object is thrown at a higher angle than before but with same velocity.

Then by using the same equation used before we have 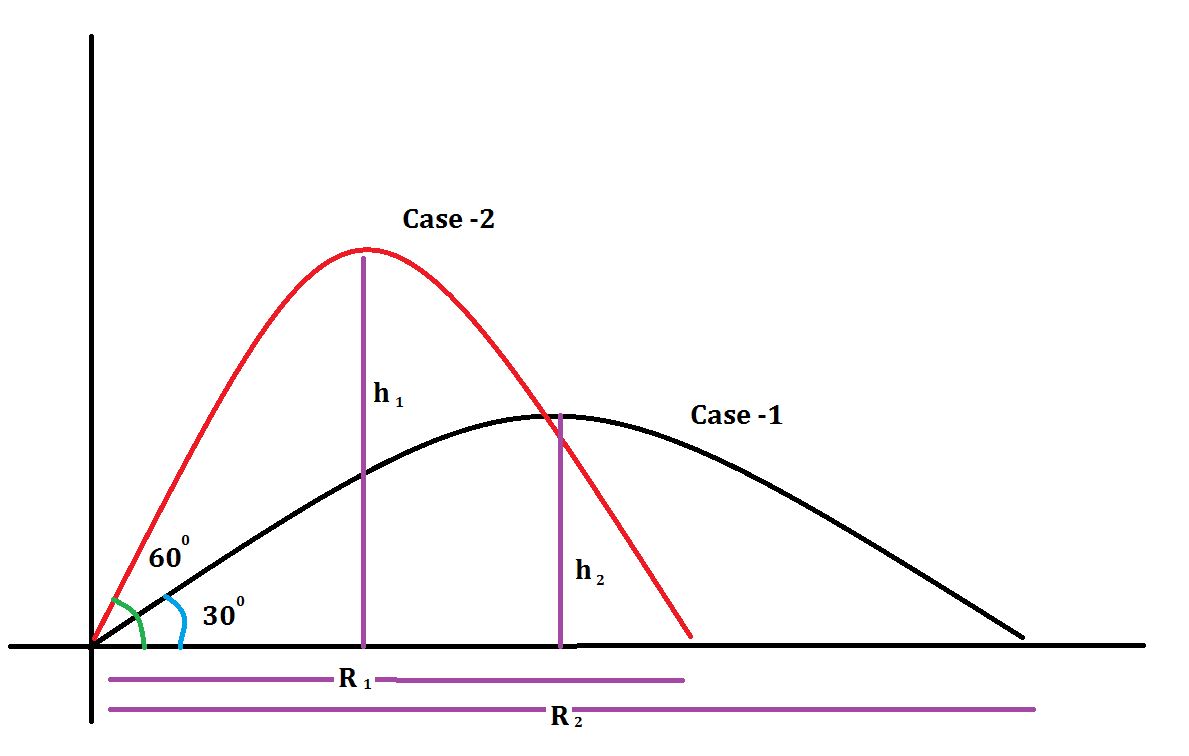 (Sorry for the funky colors :P)

To build up a little bit on our comments, do you mean that you expect the trajectory to be of different shape at the end than at the beginning ? This is again only possible with friction. If there is no friction, your Newton's equation of motion reads

and is invariant under the transformation $t \mapsto -t$ (it is said to have time reversal symmetry). The practical consequence is that your trajectory must have some axis of symmetry : the football cannot move differently flying upwards than falling downwards because each of these movements map eachother through the time-reversal transformation.

then you break time-reversal symmetry because $\vec{v}$ becomes $- \vec{v}$ under this transformation. Thus, as @leftaroundabout pointed out, you need a friction term to get the trajectory distorsion you described in your question.

2
Parabolic Motion
2
Parabolic motion and air drag
2
Parabolic motion (experiment)
2
Demystifying the physics of weightlessness in parabolic flights
18
Elliptical Trajectory, or Parabolic?
0
Football Dynamics
0
How is force applied on a charge moving through an electric field constant?
0
How do I calculate evection and variation for the moon in my simple solar system model?
12
Throwing a bottle containing pills to the air vertically