I have water in a bottle, as I open it in space(or vacuum for that case ). From what I have read in books the water will instantly vapourize,as the vapour pressure of the water inside, far exceeds the atmospheric pressure.

I have a different opinion, that the water will freeze, owing to the fact that vapourizing water from the surface will take away the heat from the lower part.How far is this assumption true? What factors will determine the second statement, if it is true(liquid nature,vessel shape,quantity)?

As the astronauts observed, it first boils and then slowly freezes. If you put water in space, the water would start to boil on its own due to the fact that the vapor pressure would exceed the pressure of the environment the water is in. And, after that, it would start to crystallize.

However, the reason why it would freeze is not mainly the vaporizing water's absorption of heat from its surroundings. As the pressure decreases, the latent enthalpy of formation of water increases which would support you point that the vaporizing water would absorb even more heat from the remaining water; and therefore, it would decrease the temperature of remaining water to a temperature where desublimation(phase transition from gas to solid) takes place. However, since while freezing the water, it would have to give heat, the temperature of surrounding environment would increase which would result in sublimation of that small amount of frozen water.

However, since the surrounding environment would be space, the vaporized water would slowly lose heat by means of radiation and its temperature would decrease to desublimation temperature. Therefore, it would start to crystallize and what we are left with would be crystals of frozen water.

To understand this better you can look at the phase diagram of water below: 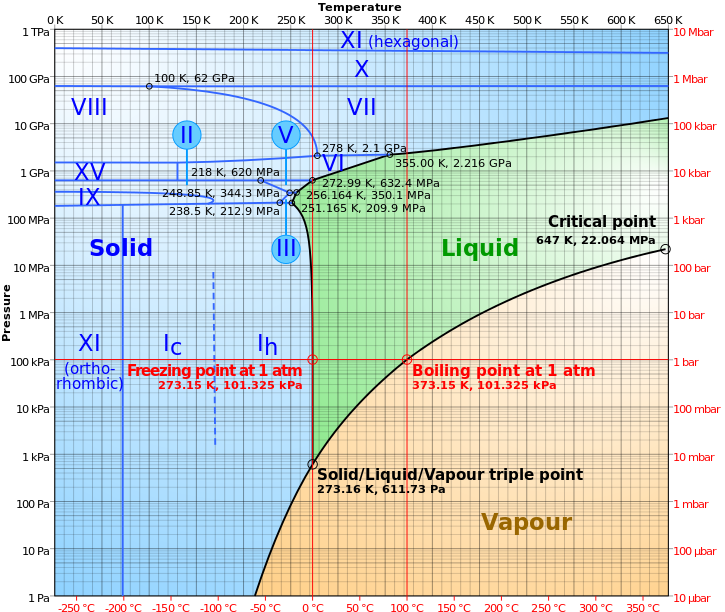 Not the answer you're looking for? Browse other questions tagged thermodynamics fluid-dynamics evaporation or ask your own question.

2
What limits the mass transfer from a boiler to a condenser in a sealed vessel?
0
Is vapour pressure based on partial pressures or just total pressure on the liquid?
1
What is the nature of equilibrium between water and air in a sealed container that is heated above 100C?
2
Why don't liquids just boil off in the open just as they would in a vacuum?
2
Phase transitions, external and internal pressure and boiling
1
On the evaporation of fluids
0
Does water vapour also emit radiation when rising into the air before condensing?
0
Why air rushes out of bottle if we pore hot water in it and close cap and squeeze when air moves out?