A heavy chain with upper end falling with constant velocity

The most basic form of my question is: "Can the normal force from the ground be enough to let a chain's upper end fall at constant velocity?" I suspect the answer is no, but to elaborate, here is the actual question:

The upper end of a uniform chain of linear mass density $\mu$ is lowered with a speed $v$. The reaction force offered by the ground after the chain "after the chain falls through a distance $y$" is?

(In the diagram, a part of the chain is shown to already rest on the ground. Unfortunately, the quantity $y$ has not been marked in it.)

Since the original length is not given, i suspect the paper setter meant "when a length $y$ of the chain is yet to fall."

With this assumption, let us consider a force $F$ (variable if needed), that is applied on the upper end. Also, i assume that the speed of all the parts of chain still in motion is $v$, and thus (is this a correct conclusion?) the tension throughout the chain in motion is zero. Now considering the part of the chain in motion, for its equilibrium, the normal force $\mathcal N$ and the force $F$ together must balance the weight of the chain in motion, thus giving: $$F + \mathcal N = \mu gy $$ Also, considering a small element $\mathrm d y$ coming to rest in time $\mathrm d t$ is only due to the normal force $\mathcal N$, thus giving: $$\mu v \, \mathrm dy = \mathcal N \mathrm dt$$ $$\mathcal N = \mu v^2$$ But they give the answer as $\mathcal N = \mu (v^2 + gy)$. The only way i could get it by assuming that the normal force by the ground also balanced the weight of the remaining chain. Is this true? If not, is my previous reasoning (and my answer) correct? If not, where am i going wrong?

Edit: After reading George Smyridis's answer, i still have a doubt. How can the normal force alone be responsible for the chain falling with constant speed? If it were so, what makes it different from an ordinary chain falling on the ground? Shouldn't there be an extra force $\vec F$ acting on it (as shown in the following diagram), that acts on the chain, so that it falls with constant velocity? 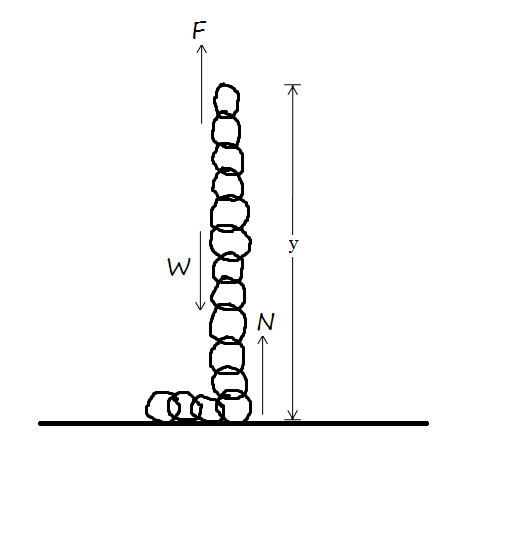 The chain can be considered a system with variable mass, and the mass of the parts that touch the ground is the mass that it loses. The general equation of variable mass motion is written as:

Since the velocity of the chain is constant:

The chain is falling down and the part of the chain that falls on the ground stays still, therefore:

where $\vec v $ is the velocity of the chain.

Now since the chain is uniform, its mass can be calculated by

The rate at which the chain loses its mass is:

The force applied on the chain by the ground is not the only external force acting on it, gravitational force also acts on it. Therefore:

2
Finding a Differential equation for falling chain
1
How is normal force going in the direction of weight?
0
The dangling chain - help with derivation
31
Will a falling rod stay in contact with the frictionless floor?
15
Why do rain drops fall with a constant velocity?