How can the fact that there is no electric field inside a hollow conductor be explained by Faraday's ice pail experiment? 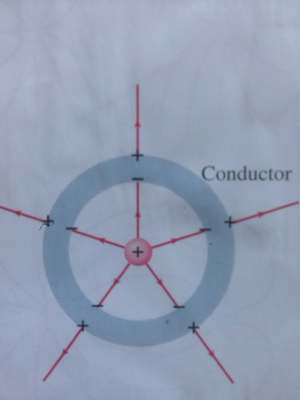 Basically something very similar to these pictures 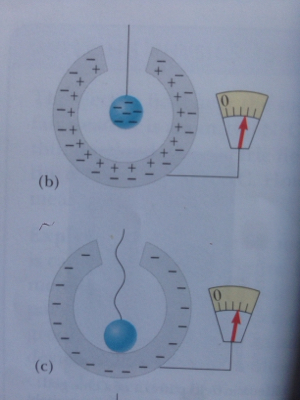 These are from two separate books. The bottom picture says that all the excess charge in an object can be transferred to an already charged metal she'll if the object is touched to the inside of the shell, which I doubtfully assume to mean the same thing as that there is no electric field inside a shell.

The top picture is what explicitly explains a reasoning why there is no field inside a shell. But the problem is I don't get the whole explanation. Basically, it says that

Ok, there is something veeeerrry contradictory here. If the whole point of this part is to explain why there is no inside the hollow shell, why is it explicitly stated that "the lines leaving...end on negative charges"?

An more irrelevant question is, does distance matter how much charge is induced?

There are some different regions and you need to assign them all names and keep them straight or you'll get them confused.

There is the outside. If you had a solid conductor without a cavity it would be the part that isn't the conductor.

Then the third region is the conductor itself. It's the region that isn't the outside and also isn't the cavity. It's a conducting metal. It has zero electric field.

What about the other regions, do they have zero electric fields. They don't have to, and often they do not.

The field lines come out of the charge in the cavity, go through the region of the cavity and end on the inside surface so they only exist inside the cavity, not in the conductor. Recall those are two different regions.

Next if there is charge on the outside surface the field lines come out of those charges and head out into the outside region. So they exist only on the outside, not in the conductor. Recall that those are also two different regions.

But isn't outside just the outer surface of the conductor? Why make it so complicated? The book just says that all the net charges will stay right on the surface.

"Because there can be no field within the metal, the lines leaving the positive charge must end on negative charges on the inner surface of the metal." 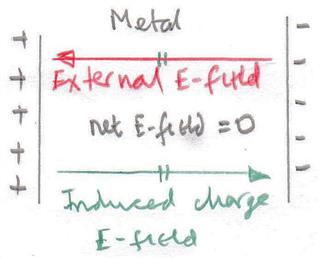 You might find it interesting to read Faraday’s original paper which he wrote over 170 years ago?
The language is old fashioned but the ideas are all there.

Not the answer you're looking for? Browse other questions tagged electrostatics electricity electrons or ask your own question.