I have learnt two derivations to calculate the height of the liquid column in a narrow capillary. Here is a derivation using forces and equilibrium : 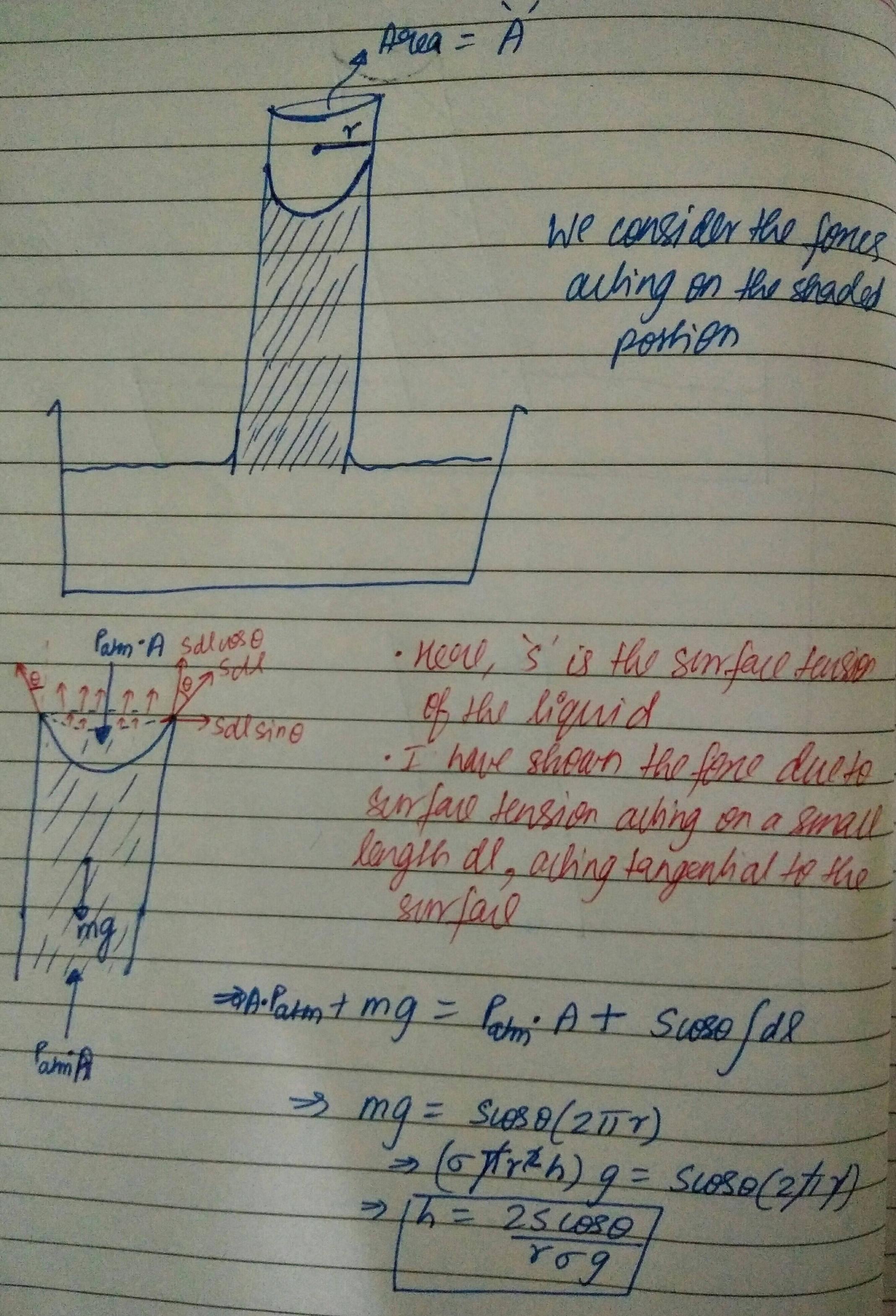 This is the exact derivation given in my book. But I don't quite understand one thing. My book just states that the forces shown in red are '' forces due to surface tension ''. Who actually exerts these forces on the liquid in contact with the glass, and in what direction?

Surface tension is a phenomenon which occurs irrespective of whether a solid surface is in the vicinity. It is the result of the discontinuity in molecular attractive forces present at the free surface. The translates into a situation in which the surface behaves as if there is an elastic membrane embedded within the surface. The membrane force acts locally in the direction tangent to the surface, and its value per unit length is equal to the surface tension. If the fluid surface is curved (as in the capillary case), the membrane can support a pressure differential across the surface (sort of the way a balloon supports a pressure difference from inside to outside).

When the fluid surface makes contact with a solid surface (as at the capillary wall), there are three phases in mutual contact (solid, liquid, and gas). The contact angle between these three phases is a unique function of the solid and liquid involved.

The force balance in your book takes into account both these effects (i.e., the pressure difference resulting from surface tension, and the surface tension force acting at the capillary wall at the contact angle).

I would explain it this way:

Adhesion happens because of intermolecular forces of attraction. For example, Water molecules of any aqueous solution contain 2 hydrogen and one oxygen atoms that are covalently bonded. And in an aqueous medium they could get split into protons and hydroxyl ions. These ions are again bonded by Hydrogen bonding.

A glass capillary tube contains approximately 75% silicon dioxide (SiO2), sodium oxide (Na2O) from sodium carbonate (Na2CO3) and other several minor additives. Among these Silicon is a tetravalent metalloid and is more reactive than germanium present right below silicon in the periodic table. And this means that it could exert a vanderwaal force of attraction with other anions.

And so my understanding is that the hydroxyle ions of water molecules get attracted by the Tetravalent Metalloid (silicon) which results in adhesion. These forces of attraction are not enough to make them chemically reactive, for which a very high temperature is required to the tune of ~1700 degrees centigrade (at a melting point of glass). And this forms the basis for adhesion.

Among other forces, the vanderwaal forces of attraction and hydrogen boding in water molecules provide enough force for cohesion of water molecules that leads to surface tension.

The force you are referring to is exerted on the liquid surface by the solid wall surface it is in contact with. It is a consequence of surface tension in the liquid.

This force is balanced by the weight of the liquid column. Hence also the capillary rise is more in a narrower tube (you can think of it as being able to accommodate taller liquid column of same weight).

Now where does adhesion factor in? It is by strong adhesion that the liquid sticks to the wall of the tube in the first place & the adhesive force is factored in while determining the contact angle of the liquid surface with the tube. This (contact angle) is in-turn used to calculate the height.

Not the answer you're looking for? Browse other questions tagged surface-tension fluid-statics capillary-action or ask your own question.