Interior material and spacetime of a black hole described from outside

This question is mostly about general relativity. Answers regarding the quantum physics behind it are also appreciated, but first I would prefer solutions from a relativistic viewpoint.

If you fall into a black hole you reach the singularity at $\text{r}=0$ in a finite proper time. In contrast, for a stationary observer on the outside, the infalling object needs an infinite amount of coordinate time to reach the horizon at $\text{r}=\text{r}_s=2\text{G}\text{M}/ \text{c}^2$, in other words, everything that falls into a black hole gets stuck on the horizon and never crosses it.

Relative to a stationary observer outside the black hole the gravitational time dilation on the event horizon $\text{r}_s$ is infinite, so even things moving with $\text{c}$ can not cross the horizon because velocity is distance/time, and if time stands still, there is no movement.

Also, if you try to find the outer coordinate time for a given proper time of an infalling observer who has already passed the horizon, you get physically nonsense results like imaginary numbers. So from the relativistic viewpoint, if someone is inside the black hole, there should not even be any time left on the outside, if I get that right.

That means, for the observer on the outside, the black hole should be hollow with all the stuff plastered outside the horizon (on the "stretched horizon, as Susskind mentions here and here).

Image: sketch of the supposed space-grid at a given coordinate time as viewed from outside the black hole (note the empty place inside the circle in the center of gravity, which would be a hollow shell in 3D)

Right now, speaking from the perspective of a stationary observer on the outside of the black hole, is there even any space inside a black hole, or is the metric of spacetime warped to form a hollow shell with $\text{r}=\text{r}_s$, if you were to describe it from 1 higher dimension? At least that's what it looks like here, here and here. 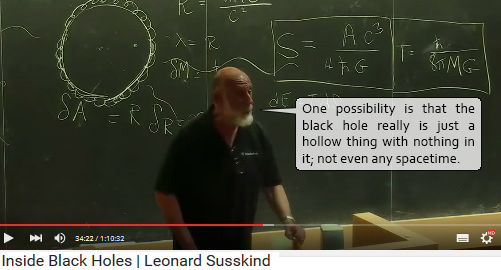 Image: Susskind saying that even from the perspective of an infalling observer there might not be any spacetime behind the event horizon

Does the singularity in the center even form during the lifespan of an outer observer?

An astrophysical black hole formed from the collapse of matter. And for that one, you can still see the center from before an horizon formed. Well, you can see it as well as you could ever see the center of a star.

Right now, speaking from the perspective of a stationary observer on the outside of the black hole, is there even any space inside a black hole,

For an astrophysical black hole, yes. For an eternal blacks hole, doesn't matter, they don't exist.

or is the metric of spacetime warped to form a hollow shell with $\text{r}=\text{r}_s$, if you were to describe it from 1 higher dimension?

You could also use radar distance instead of that higher dimensional embedding and then the event horizon is an infinite radar distance away so it might seem mysterious.

Does the singularity in the center even form during the lifespan of an outer observer?

That's what cosmic censorship is all about. People want to say no, the only problem is the answer is yes for some parameters choices. So you can claim those parameters are "unphysical" and then say no. But it's become another tautology like the event horizon itself.

If so, what happens to the initial material that was at the center before the black hole formed?

You say "if so" but the rest of your question still makes sense. It's all there. Imagine a 3d spacetime. If it were Minkowski spacetime then surfaces of constant $z$ could be surfaces of constant time. Now we could have a circle of infalling matter. Inside the circle you have flat Minkowksi space. Because of time dilation each surface that is spaced inside the circle a certain distance corresponds to a larger spacing farther outside.

As the circle contracts that effect gets stronger. So that last hour before the center hits the horizon has surfaces of constant outer time that have an infinite number of layers stack up.

Not the answer you're looking for? Browse other questions tagged general-relativity black-holes or ask your own question.

12
When does a singularity start to exist during a black hole formation?