Does the Inertia of a Cue Ball Affect its Reflection Angle off a Resting Billiard Ball?

Consider the following Diagram in which a Cue Ball (A) of mass M is shot twice at another pool ball with identical mass M. 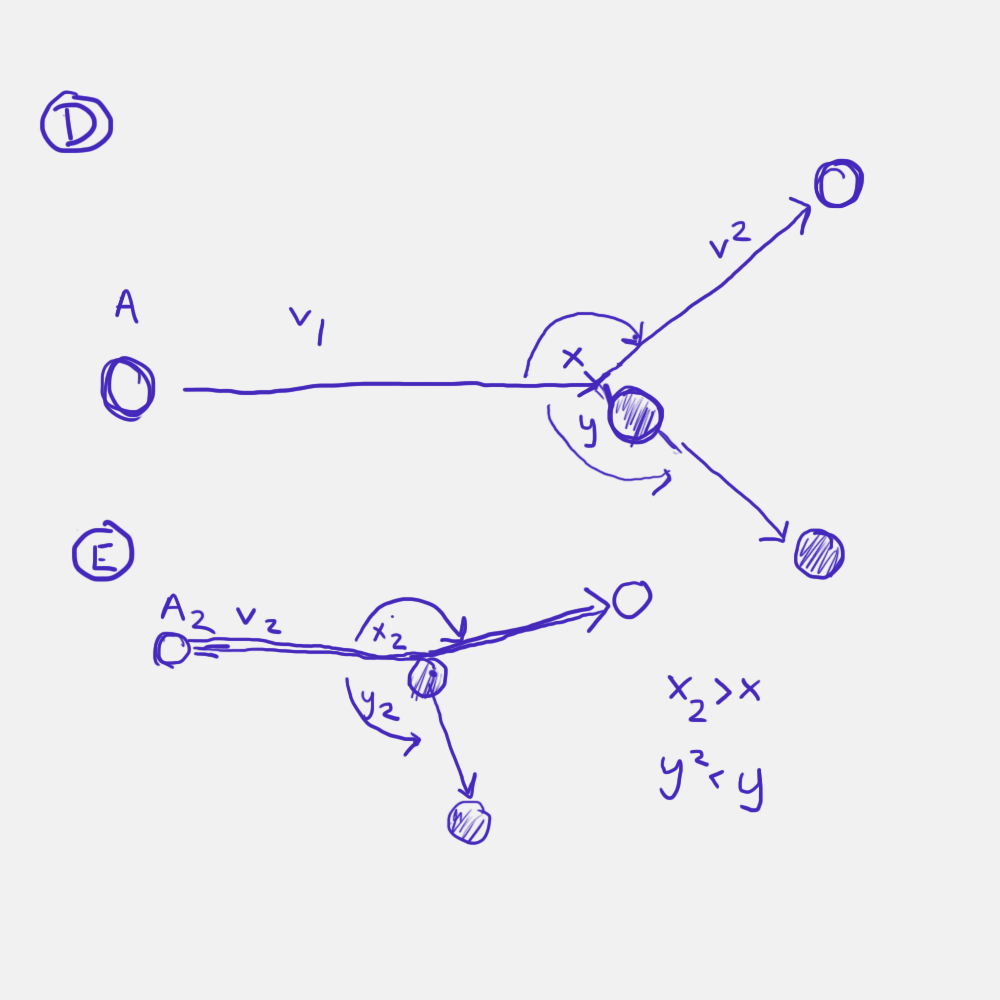 Is this thinking accurate? Or is this an illusion, and does the value X remain constant no matter what the force V?

**Note: This is a simplified example where the ball is not spinning (Or in pool terms, "full stun."). But if you would like to provide a general formula that also accounts for spin, please do!

The reason for this is on a stun shot, there are no transfer of angular momentum. The force is transmitted along the line from the center of the CB to the OB, hence the reason why OB is deflected at angle y. Since all the force is transmitted along this line, there are no linear momentum of the CB along this line, so the CB will deflect at 90 degree - y.

Speed of the CB has not effect on the angle with the caveat that the speed is small enough such that the deformation of the CB & OB is negligible.

If you do see an angle difference with increased speed, that's due to throw. On the throw, the CB is rolling forward with no sliding (assuming the distance you strike with the cue is far enough for the CB to get into rolling with no sliding). At contact, the angle of deflection remains the same; eg y for OB where y is the angle between the path of motion to the line from the center of CB to OB, and x is 90 degree - y. Because the CB is rolling, after contact, there would now be rolling with sliding, which produces a contact force which causes the CB to curve along the path of a parabola until it reach rolling without sliding. This contact force is wrcosx/sqrt(v^2 + 2vwrsinx + (wr)^2), where w is the angular speed of the CB at contact, r is the radius of the CB, v is the speed of the CB, and x is the angle of deflection.

The final angle that the CB would travel -- I'm still working on that.

The speed of the cue ball is irrelevant in the elastic scattering approximation, which I think is very good for ball-ball collisions in pool, although I have noticed different things happen at very low speeds.

I did want to point out though that in fact the scattering angle will not be perpendicular if cue ball has no spin. This is because of the friction between balls, which acts perpendicular to the (typically much more important) normal force. The only way to achieve zero throw is to spin the cue ball such that there is no relative motion at the interface between the two balls. This can be pretty important when making hard cut shots.

Not the answer you're looking for? Browse other questions tagged newtonian-mechanics momentum conservation-laws collision inertia or ask your own question.

25
What determines the angle of the cushion on a pool table?
1
Force to deflect ball colliding with wall
3
Why does spinning a golf ball one way make it go further than spinning it the other way?
2
When a ball bounces on a wall at an angle, why does the angle of incidence equal angle of reflection?
3
Is more force imparted during an perfectly elastic collision or perfectly inelastic collision?
90
Why does a billiard ball stop when it hits another billiard ball head on?
6
How do observers in inertial frames explain fictitious forces?
2
Direction of deflection due to Coriolis Effect