If an object is freely suspended from a pivot, why does the centre of gravity fall directly below that pivot? Would this be the same in non-uniform gravitational fields?

When an object is freely suspended to a pivot, the centre of gravity of the object does come below the pivot. However, note that here 'below' is defined in terms of the gravitational field itself, as pointed out by Lewis Miller in his comment.

Take for example a long rod suspended from a pivot. The gravitational force on the rod can be considered to act through its centre of gravity. If the centre of gravity is not exactly below the pivot then a torque is going to act due to the gravity, as in figure. 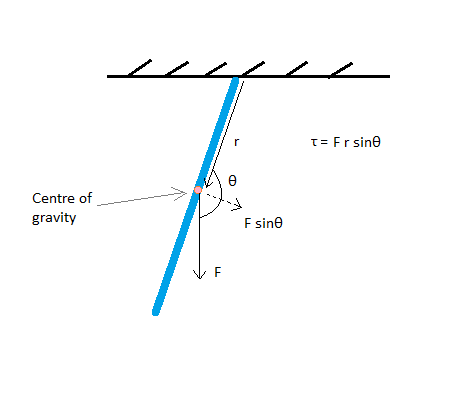 F is the force due to gravity. r is the distance between the point of application of the force and the pivot. $\theta$ is the angle between the direction of F and r.

The torque $\tau$ is then $$\tau = \mathbf {Fr}\sin\theta$$ When the centre of gravity is exactly below the pivot then the angle, $\theta=0$ so $\tau=0$. The body stays in equilibrium due to absence of net rotational force and net translational force(the weight of the rod is counteracted by the reaction force of the pivot).

As regards to your second question, this would be the same in non uniform gravitational fields as then the position of centre of gravity would change but the same logic applies.

Because the pivot cannot exert a torque to counteract gravity. So the only stable configuration is such that the force-line of the weight passes through the pivot having no net torque about the pivot.

Not the answer you're looking for? Browse other questions tagged newtonian-mechanics newtonian-gravity reference-frames torque or ask your own question.

1
Inertial forces and centre of mass
3
The equivalence principle and identifying free-fall as a locally inertial frame
6
Will centre of gravity coincide with centre of mass if density of object is non-uniform?
0
Difference between center of mass and center of gravity
0
Acceleration of free fall at different parts of Earth
0
How can we quantify gravity within and outside a non-rotating cylinder in outer space?