Is this conceptualization of blackbody radiation logical/correct?

From what I understand, a blackbody is a body which does not emit radiation as a result of atomic excitation/relaxation but rather solely due to the kinetic energy of its particles due to interactions with photons. The ultraviolet catastrophe is then the rapid increase in energies of individual particles due to the lack of atomic relaxation to release excess energy. As predicted by the Rayleigh-Jeans equation, the energy contained in a blackbody would blow up to infinity, and hence the body in thermal equilibrium with its surroundings would act as a well of infinite energy. Planck's solution to the problem was to assume that light was quantized in discrete packets of energy. Here is where I get confused.

There's a lot to unravel here. I'm not sure where you're getting your background information from, but let's just start at the beginning. A blackbody is just a hypothetical object that would absorb any light that hits it, regardless of its wavelength. How it actually would hypothetically do that physically doesn't really enter into it, since you can't make a material that's a perfect blackbody anyway. I mean, sure there's the event horizon of a black hole, but anything you can actually make will only be a blackbody to some moderately good approximation over some finite range of wavelengths. If you can post a reference showing where the idea you express in your opening statement came from, it might make it easier to see what you're really asking here. The same goes for your statement about the ultraviolet catastrophe coming from the lack of atomic relaxation. It's not really clear what you mean by that, and again, a reference would help.

There's a much simpler way of thinking about a blackbody and the ultraviolet catastrophe. A blackbody is just defined as something with a spectral absorption identically equal to 1, regardless of how that comes about physically. And in fact the physical details are unimportant; just assuming you have a blackbody and that electromagnetic radiation follows the laws of thermodynamics is all you need. You can derive the blackbody formulae without any knowledge of the physical details (in terms of atomic transitions and so forth). So I think your questions about the atomic mechanisms are a little misguided; they aren't really relevant to blackbody radiation, which involves hypothetical materials with idealized properties.

The ultraviolet catastrophe comes about for a very simple reason: Classical thermodynamics tells you that every independent quadratic degree of freedom carries kT/2 (with k being Boltzmann's constant and T being the temperature) of energy on average. If you try to apply classical thermodynamics to a box of electromagnetic waves with blackbody walls, a simple calculation shows that you actually have an infinite number of independent quadratic degrees of freedom. You can have an electromagnetic mode with half a wavelength per box width, one wavelength per box width, 1.5 wavelengths, 2, 2.5, etc., and there's no obvious reason why there should be an upper limit (and that's just for a one-dimensional box; in 3D the possibilities multiply greatly). So if there are an infinite number of electromagnetic modes and each one has the same amount of thermal energy, you have an infinite amount of thermal energy. Nothing in the mathematical derivation depends on the physical mechanism that gives the blackbody its properties; you just hypothesize that it does and see what you can derive from that. So the details about atomic relaxation aren't really relevant.

Anyway, to your last question, the answer is yes...sort of. A given kind of atom will absorb some wavelengths and not others. These absorption lines aren't perfectly sharp; there are physical effects like Doppler broadening and lifetime broadening, as well as the interactions among nearby atoms, that see to that. However, the absorption spectrum for high-energy ultraviolet photons becomes continuous above some point, because a photon now has enough energy to remove an electron from the atom entirely.

And when the atoms are bound up into molecules it gets more complicated, because you have electrons shared among atoms, and the molecules themselves can bend and twist and rotate and stretch. There are a lot of different ways for matter to absorb radiation. There's a lot more going on than just atomic absorption.

I will address this:

(i.e. different atoms have different resonant frequencies and can only absorb at multiples of those frequencies)?

No. Atoms and molecules are in the quantum mechanical regime, resonances describe classical waves at distances much greater than atomic. Photons come in quantized discrete energy of E=h*nu.

In the quantum mechanical solutions for a single atom, there exist specific energies where an electron can be excited and de-excited from , emitting a photon.

Each is a unique frequency for the atom species, in the above case hydrogen, and that is how astrophysicists identify the elements in the sun and stars, by the spectral lines emitted and absorbed by the atoms.

Note that for higher excited states the energy levels are practically continuous, which allows a large range of frequencies to be emitted and absorbed around the bound state value of , for example, 13.6 ev. It is not sharp, but the photons still carry a discrete energy quantum.

When it comes to molecules, additional energy levels will exist and the energies will be lower than the atomic levels, and the photon energies will be even more diffuse about a central value. For the lattice of molecules in a solid the possible energy states are multiplied by vibrational and rotational levels.

The black body formula approximates the effect of all the possibilities of excitation and de-excitation from energy levels.

Statistical mechanics tells us that the temperature of a gas depends on the degrees of freedom and the average kinetic energy. It gets more complicated with solids, but it is still true that the energy of a solid as defined by its temperature supplies the energy for transitions in lattice and molecular levels that appears as black body radiation. The formula fits approximately, and constants of emissivity and absorptivity are used to fit the data to the theoretical curve.

The best fitting curve to the theoretical black body curve is the one of cosmic microwave radiation. 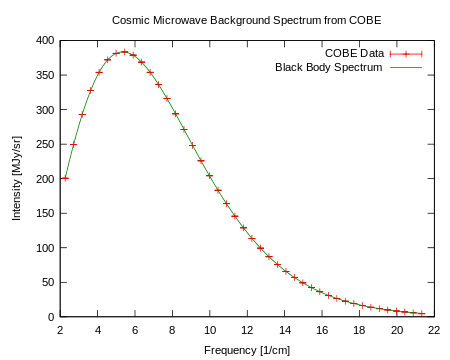 Matter needs emissivity and absorptivity constants/functions to fit the black body curve, and these are usually found in engineering tables.

For solid matter which has very many possible energy levels and can be very smooth, nevertheless there is a difference between measured radiation to the theoretical black body curve: 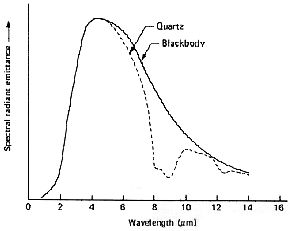 Emissivity spectrum of quartz compared to that of a blackbody at the same temperature; quartz emits less energy and therefore has emissivity less than 1.00

The black body curves are useful for estimating the energy output of stars, even though the fit to the black body is approximate, here is the sun spectrum. 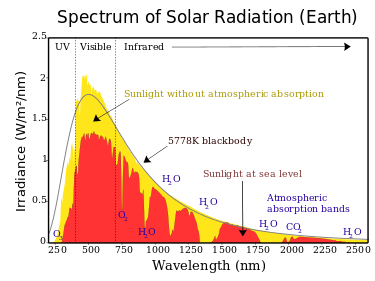 Solar irradiance spectrum above atmosphere and at surface. Extreme UV and X-rays are produced (at left of wavelength range shown) but comprise very small amounts of the Sun's total output power)

The differences are due to the collective addition of various energy levels in the plasma of the photosphere of the sun.

Individual spectra are detectable in gases,because the main excitations and deexcitations are from collisions between molecules, and the collisions excite molecular and electronic levels and the return to the ground state is the black body radiation.

For atmospheric gasses, for example, the black body curve is not such a good approximation. 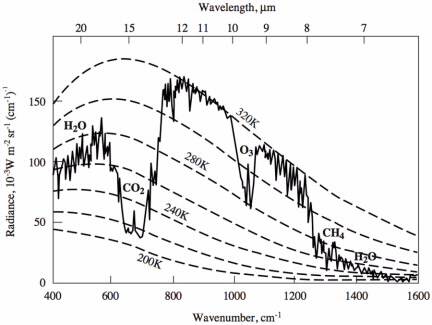 Nevertheless the black body curve is a good tool for a first order approximation of energy losses, and engineering tables for material emissivity should be used for accurate estimates.

Not the answer you're looking for? Browse other questions tagged quantum-mechanics thermodynamics thermal-radiation or ask your own question.

7
Why does black-body radiation work for *everything*?

1
Why do the high frequency waves have the most number of modes?
0
Blackbody radiation and thermal equilibrium?
3
Questions on derivation of the Rayleigh-Jeans law
3
Where is quantization used in deriving Planck's law?
1
Discrete Cavity Radiation vs Continuous Blackbody radiation, violation of the 2nd law of thermodynamics?
0
Problems with the derivation of Planck's radiation law
1
If the Rayleigh-Jeans Law is derived considering waves contained in a cavity, how does it give us the emitted wavelengths of a blackbody
1
UV catastrophe and Equipartition Theorem absurdity
1
Planck's derivation of Blackbody Radiation