Looking at the formulas, the mathematics explains why, it depends on the radius: dependence on "r^2" for "g" and on "r" for "V" (gravitational potential, as we know used to calculate the escape velocity). So when the radius is very big compared to mass, it may lower "g" while "V" is higher.

Imagine you had a small asteroid. The surface gravity isn't very strong because it's small and not very dense. If we could compress it, then we could approach closer to the center of mass and increase the surface gravity.

It's impossibly tiny, but for now we can imagine landing on the surface and walking around almost as if we were on earth (because I'm very short and I'm ignoring tidal effects for a moment).

We get the high acceleration because we are so close to the mass. But what does that mean for the escape velocity? Now we take an earth launch vehicle and light it off. Because gravity at the surface is the same, the launch begins similarly.

But on earth, after the vehicle has gone up a 1km, the distance to the center of the planet has hardly changed. Gravity is still pulling very strongly and we continue to need a lot of fuel to keep going. This slow drop the gravitational field means that we have to do a lot of work to reach escape speed.

On our compressed comet though, rising 1km is already 2 orders of magnitude greater than our starting distance from the center. The gravitational field has already dropped to near zero. You can see that we've done much less work to reach escape speed.

Here are the graphs of gravitational field strength against height above surface for the Earth and Uranus. 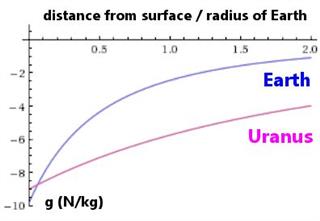 The escape velocity from is dependent on the work done in taking a mass from the surface of a planet to infinity and the work done is the area under a graph force (per unit mass) vs distance graph.

By inspection the reason for the escape velocity of Uranus being greater than that of the Earth can clearly be seen.

If one of these two spheres is less dense, then it has a larger volume, and a larger radius, than the other. Therefore, if you are comparing the escape velocities on the surface of the two spheres, then the sphere with a larger radius clearly must have a smaller surface escape velocity, since a projectile starting at that larger radius has an advantage; it has already climbed out of a significant amount of the gravitational field before it started, and needs less velocity to escape the rest of the way.

Consider an imaginary Uranus around earth and put the body on that surface and then see what will be value of g at that point for the two planets.

The velocity needed to rise up from earth's surface to the imaginary surface will counter balance some of the difference, but overall it is higher escape velocity for Uranus.

But still too much mathematics, I need an explanation in words.

It's the mathematics, not the words, that makes physics today what it is. That said, I'll try to give an explanation in words. I will still use mathematics, however.

For example, consider a planet that is four times larger than another planet, in terms of radius. That's Uranus and the Earth. The desired conditions will be met if the smaller planet's density is at least 4 times but no more than 16 times that of the larger planet. The ratio of Earth's density to that of Uranus is 4.34, which is in this range.

Not the answer you're looking for? Browse other questions tagged newtonian-mechanics newtonian-gravity energy-conservation celestial-mechanics escape-velocity or ask your own question.