Why does the mechanical advantage of a wedge use the length along the slope?

I've been trying to figure this out, and to make matters more confusing, some sources actually do say that the mechanical advantage is calculated using the length down the middle rather than along the slope. Some sources aren't even consistent with themselves and seem to conflate those two dimensions, as though they've never heard of trigonometry.

I'd be happy with links if anyone can link me to a website that explains this adequately. Thanks!

Consider an inclined plane with no frictional forces acting. 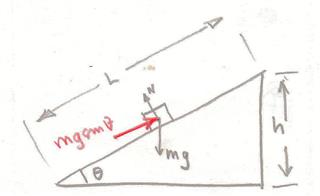 With wedges there are a number of approximations which have to be made and if one of them is that is the angle of the wedge $\theta$ is small then $\sin \theta \approx \tan \theta$ and this approximation is equivalent to assuming that the hypotenuse is approximately equal to the adjacent side.

For the wedge which is used for splitting wood there is a similar analysis except that the “load” force is at right angles to the surface of the wedge .
Assume there is no friction then the forces which act on the wedge are shown below.

There are other forces in action which have been ignored.
The force on the tip of the wedge due to the wood and also the frictional forces.
For an axe that friction force is reduced by making its surface as smooth as possible.
On the other hand a wedge which is used to split wood is designed not to pop out between being hit by a hammer by having a surface which is ribbed.

All in all the theoretical value of the mechanical advantage of a wedge does give an order of magnitude for its force multiplication but not really much more.

4
Why is the mechanical advantage of a wedge = length of slope/ width?