Before and During the sunrise

Last year we went to a remote place near forest to a site with dark and clear skies. I captured two photos of the East horizon before and during the sunrise. I have questions regarding the effects you can see here. 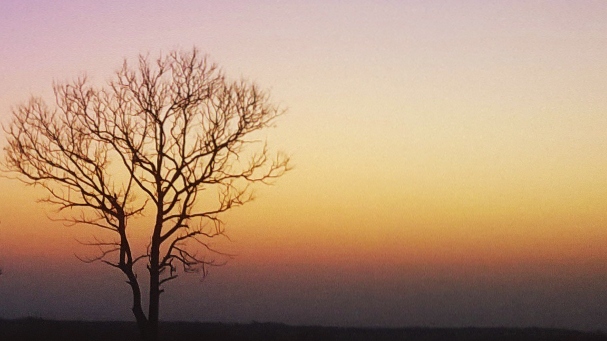 In the above image you can see the sky seems Dark above the horizon above it is a bright band. It seems much like the photos in this wikipedia article Earth's shadow Which says it happens due to earth casting it's own shadow on atmosphere and that bright band seems like Venus's belt. Check here about them. BUT they are the phenomenon observed on the opposite direction to the direction of setting and rising of sun. 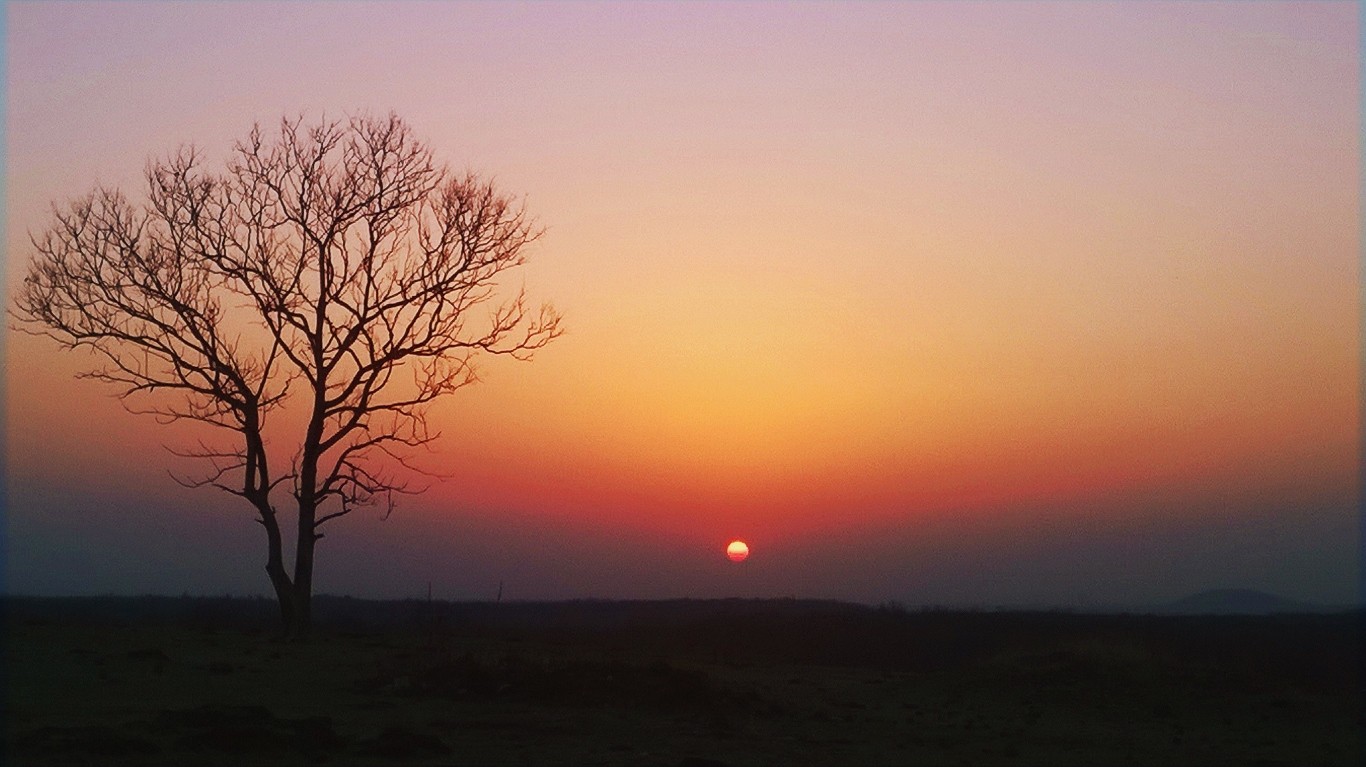 Now into the second image you could clearly see the sun when rising the dark region seems to make a valley like structure sloping from both sides towards sun. I don't have a comment why it shouldn't be. BUT What makes this happen?

The first picture shows the point in time where ancient cultures started counting the (variable with seasons) twelve hours of the day , i.e. when a line appeared between dark blue and pink.

At night the sun is obscured by the bulk of the earth, and the observable sky is in the shadow. As the earth turns towards the sun the point comes where the higher part of the atmpsphere is no longer in the shadow , and is being illuminated, which becomes more obvious if there are clouds high up, or airplane tracks.

The image below should clear up questions.

Diagram showing displacement of the Sun's image at sunrise and sunset

S' is what is observed but the real sun is at S, and the picture is recording the refracted image through the atmosphere.

Atmospheric nitrogen and oxygen scatter violet light most easily, followed by blue light, green light, etc. So as white light (Red,Orange,Yellow,Green,Blue,Indigo,Violet in rising frequency) from the sun passes through our atmosphere, the high frequencies (BIV) become scattered by atmospheric particles while the lower frequencies (ROY) are most likely to pass through the atmosphere without a significant alteration in their direction. This scattering of the higher frequencies of light illuminates the skies with light on the BIV end of the visible spectrum.

which we see as mostly blue.

This holds true for the shadow still seen in the second picture, where it is the refracted image of the sun coming through the atmosphere, that you have caught. The sun is still below the horizon. Refraction happens at the image dimensions the rest of the horizon does not get as many refracted rays the further away from the sun image so the earth's shadow remains dark. The sun's color is in the lower part of the spectrum, which we observe as mainly orange, because the higher frequencies are scattered more by the atmosphere.

The inverted cone of shadow can be explained by the fall of the intensity of light with respected to the projected distance to the center of the sun. Less light is there to be refracted, scatter and illuminate , as a function of the area of the sun seen over the horizon. The higher parts contribute more to the intensity than the low part of the image.

Anna V's answer is nice. But the Question is;

the dark region seems to make a valley like structure sloping from both sides towards sun. I don't have a comment why it shouldn't be. BUT What makes this happen?

This the Hyborbola or more generally said cone section caused by the fact that you are still behind the true horizon and the sun you see is only a refracted image. 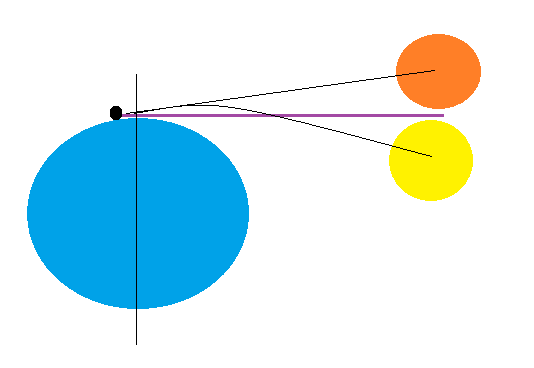 This picture shows these same light hyperbolas on wall; 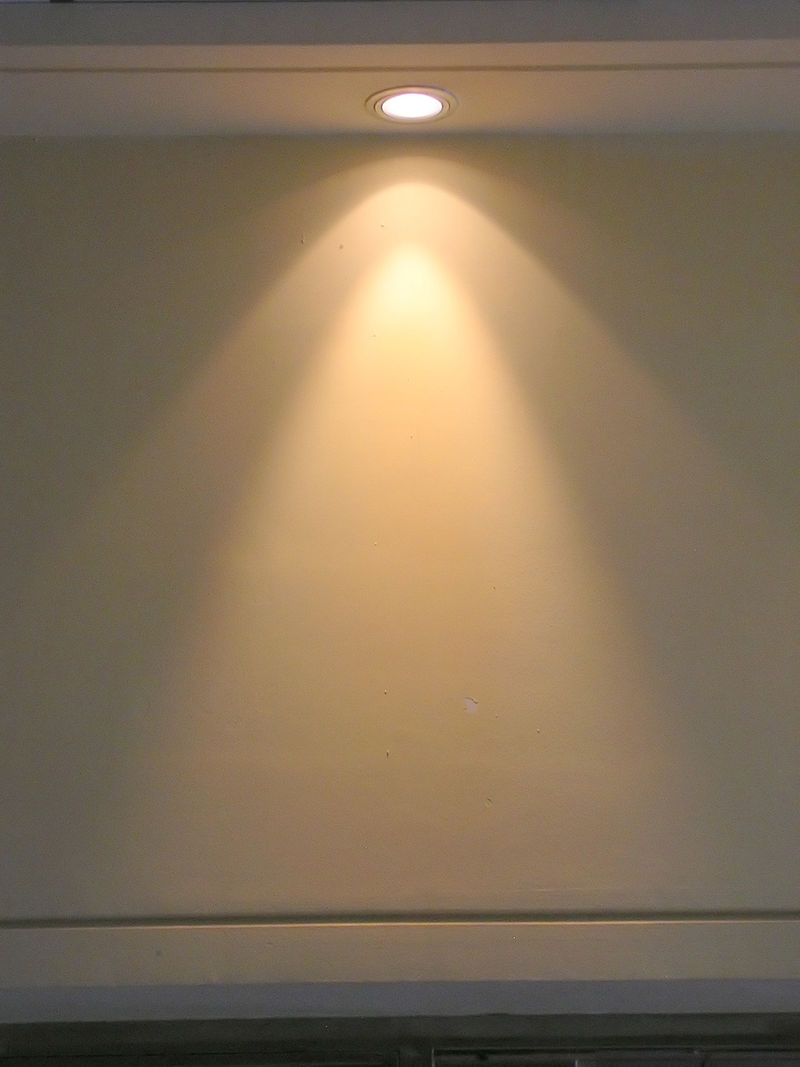 7
Formula for getting time of sunrise at a particular location?
2
Sunrise time across the globe?
1
How long will it take before the orbit of the earth is 365 days exactly?
3
How much does temperature affect the time of sunrise?
1
Increase in temperature after an unexpected rain during summer