In LIGO, a photon beam travels in two perpendicular direction and time taken by each beam is noted. Non zero time difference is a signature of GWs here. What if I use electron beam travelling at velocity (say, 0.8c) instead of photons? Will I be able to detect GWs? I think this will not work since electrons dont travel along null geodesics. But I am not sure.

In LIGO, a photon beam travels in two perpendicular direction and time taken by each beam is noted. Non zero time difference is a signature of GWs here.

Not correct, see this description and this video, at about 27', of the web cast . It is the interference pattern, the phase difference, that generates the signal. 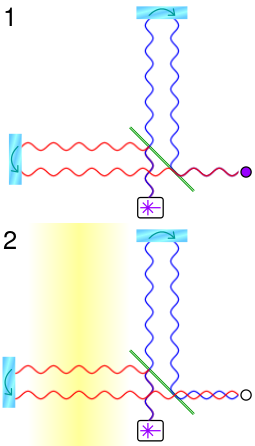 Figure 1: A beamsplitter (green line) splits coherent light (from the white box) into two beams which reflect off the mirrors (cyan oblongs); only one outgoing and reflected beam in each arm is shown, and separated for clarity. The reflected beams recombine and an interference pattern is detected (purple circle).

Figure 2: A gravitational wave passing over the left arm (yellow) changes its length and thus the interference pattern.

The LIGO set up is made so that phases at the light detector cancel out (see video at 27'), no light arrives, unless the relative distances of the two arms change, then an interference pattern will appear in the detector.

Electrons do not build up a space wave the same way photons build an electromagnetic wave, due to the charges introducing repulsive forces and magnetic fields attractive, the probability wave describing an electron beam would need a density matrix, not a coherent sinusoidal beam with phases. Thus this experiment could not be done with electrons with any velocity.

6
Orientation of the LIGO Arms
3
Time dilation of pulsar period in GR
1
Would photons "riding" a gravitational wave appear different to an observer?
11
Can gravitational waves orbit a black hole?
1
How does LIGO detect Gravitational Waves if they bend both space and time?
1
Superluminal speed in anti de sitter
1
3rd Dimension on LIGO
1
Does a Photon take longer to reach me when travelling in the "trough" of a gravitational Wave?