I'm given the following problem 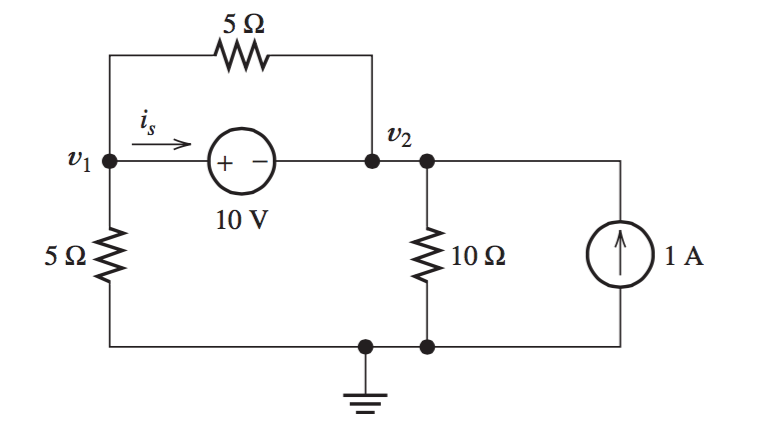 I'm a little bit confused about superposition problems when current flows through a voltage source but not the resistor.
1) When I looked at the solution for this problem, I found that when current source was zeroed, to find $R_{eq}$ they combined two bottom resistors ($5\,\Omega$ and $10\,\Omega$ resistors) that were in series and then combined it to a $5\,\Omega$ resistor that was in parallel.

Also, for some reason they wrote that the current through the top $5\,\Omega$ resistor is 0 which I don't understand.

2) To look at only the current source, short the voltage source, replacing it with a wire. That also shorts the top $5\,\Omega$, so it gets no current. $i_s$ is then the current travelling up through the lower $5\,\Omega$ resistor. Yes, it's a current divider, but $i_s$ is opposite the +1 A source.

Not the answer you're looking for? Browse other questions tagged electric-circuits electric-current superposition or ask your own question.

8
Current in series resistors and voltage drop in parallel resistors
2
Resistance and current
0
How is a variable potential divider able to reduce current/voltage through a component to zero, unlike a variable resistor?
0
Short circuit in superposition
0
Current Divider rule
4
Voltage divider: Voltage drop at first resistor
0
Direction of current using superposition method
3
Why is voltage same for the two resistors connected parallel in circuit?
0
Why will a circuit and resistors follow Ohms law when we connect different resistors together?