Quantization on Minkowski/Schwarzschild spacetimes based on unusual surface

I'm reading the book of Wald "Quantum Field Theory in Curved Spacetime and Black Hole Thermodynamics", and I'm pondering on this problem:

In Minkowski spacetime, we usually quantize our fields with respect to the $t$ coordinate, and a Cauchy surface we use is a t-constant slice (say $t=0$) - corresponding to an inertial observer. We can also quantize our field with respect to an accelerated observer in the region $\mid x\mid > t$, now with the slice $t=0, x>0$, and taking for time coordinate the proper time of one uniformly accelerated observer. The link between the two quantizations is what gives the Unruh effect. Now, instead of using $t=0$, we use another slice $t>0$, $S$ such that this slice now penetrates the region III of the below diagram. For the inertial observer, this will also give the same quantization as before. But for the accelerated one, assuming that our time coordinate still is the parameter $t$ is not clear to me that the resulting quantization will be unitarily equivalent to the preceding one (in the sense of Haag's theorem). 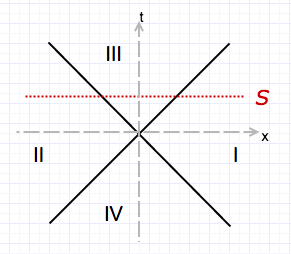 Using the similarity of Minkowski and maximally extended Schwarzschild (ES) spacetimes (this time the region III corresponds to the interior of the black hole) and the equivalent of the surface $t=0$ to the ES yields again two quantizations with respectively associated vacua: Hartle-Hawking (HH) and Boulware (B) (this is well explained in Wald's book). However, what would happen to the quantizations based on the same Cauchy surface $S$ as above? Is it possible that the resulting quantizations are respectively unitarily equivalent to those giving the HH and B vacua?

The "quantization procedure", in the modern language, is nothing but the choice of a state over the $*$-algebra of quantum field used to build up a Fock representation via GNS rencostruction. A standard way, sometimes allowable, is to define the state using the (Cauchy) data of the field on a given Cauchy surface with geometric significance. For instance it could be normal to a preferred timelike Killing vector. Alternatively the surface may be a null surface (which a possibly at infinity) and this is a way to rigorously define the Unruh state for a massless state or natural states in asymptotically flat spacetimes. The state enjoys some relation with the surface for instance it is invariant under a Killing vector field normal to it or tangent to it. The most common procedure consists of defining a scalar product using the Fourier decomposition of the evolution equation of the field with respect to the preferred Killing vector (e.g., using only the positive frequency part). This is not the only possibility however. A spacelike surface, as the one you are considering, does not carry information enough to permit the definition of a state.

If you have two states and corresponding GNS constructions (Fock representations), the issue of unitary equivalence can be discussed referring to some known theorems also mentioned in Wald's book (unfortunately a statement therein is wrong due to a misprint where the word trace class appears in place of Hilbert Schmidt. An recent quite elementary up-to-date review on basic ideas of QFT in curved spacetime can be found here)

References from my research activity

Not the answer you're looking for? Browse other questions tagged quantum-field-theory spacetime quantization qft-in-curved-spacetime unruh-effect or ask your own question.

5
Quantization surface in QFT
1
Physical interpretation of special relativity?
3
Why these null coordinates are sometimes called "time"?
1
How to "resolve a state" with respect to a spacelike hypersurface in Minkowski Spacetime QFT?
3
Flux and radiation pressure from Unruh radiation?