How do I visualize the non-coaxial rotation of this device?

The picture below shows an isolated system with a fairly massive wheel at one end, attached via its axle to a long shaft, like a bike tire on a bike frame, but the bike frame is merely a low mass 'truss.' At the other end of this long shaft is a mass of roughly the same magnitude as the wheel, so the center of gravity (CG) is roughly in the middle of the shaft. This mass is fixed to the shaft with no rotation possible. The assembly is floating motionless in 'space', with no contact to anything else. 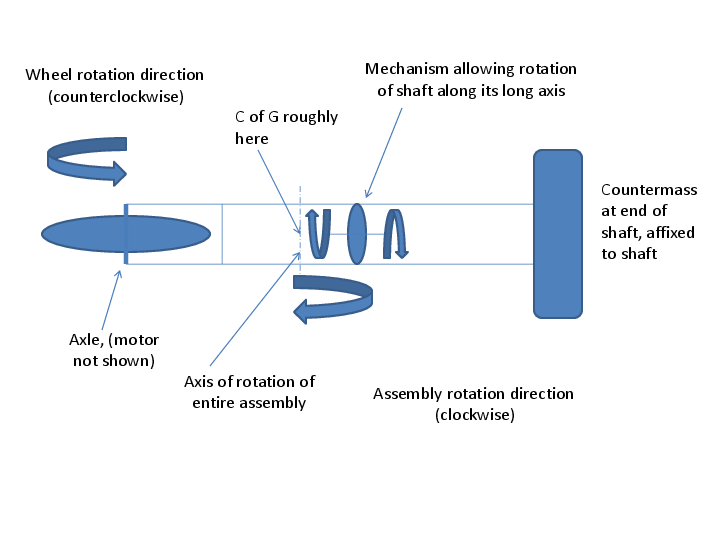 If a motor on the 'truss' causes the wheel to spin in one direction, the truss would begin to spin in the other direction about the common center of mass. The net angular momentum would thus be zero both before and after the spinning commences. The wheel and the truss would rotate in the same plane. The actual rotation rate of each part is dependent upon the individual masses, wheel radius, and the length of the shaft. It is getting complex, but so far easy enough to envision in general.

Now, place into the 'truss' a mechanism that causes this long shaft to rotate on its long axis (which would be perpendicular to the spin axis) while it is still undergoing the above rotation relative to the wheel. Upon rotation at this new joint, a force is applied to the axle of the spinning wheel (and of course to the mass at the other end of the truss, too) causing each part to try to turn in the opposite direction. Given that the net angular momentum is still zero, the vector sum of the individual parts (the spinning wheel and the body as a whole rotating around its CG) must be equal and opposite. I cannot envision the result, however, nor do I have the background to derive the equations of motion of this 'whirly gig.' The best I can imagine is that the plane of overall rotation should change, with the plane of the wheel's rotation changing in the opposite direction. This would seem to result in a state where the wheel is no longer spinning in the same plane as the overall assembly, but that would seem unsustainable and perhaps unstable. How can the behavior of this system be understood?

classical-mechanics rotational-dynamics
share | cite | improve this question | |
edited May 18 '12 at 9:22

The drawing you generated is much better than my poor attempt, and accurately shows the important aspects of the problem. Thank you. There is one difference, however. My system is literally floating in outer space, with no contact holding it up. This could be approximated in the apparatus you drew by having the support be, say, a ball joint which allows for more freedom of motion of the entire assembly so that it can wobble. Or it could be hung with a u-joint at the c.g.

To set up the problem, it starts with everything motionless. When the motor is started to spin up the disk, the rest of the assembly starts to rotate in the opposite direction to maintain the net angular momentum at zero. The complicated part comes next.

My suspicion is that, once the joint in the horizontal shaft at the blue support is twisted (not continuous spinning, just tilted), thus tipping the spinning disk, the entire length of the shaft will start to wobble as it rotates. This would be in response to the fact that the moment of the spinning disk has tipped, and an equal but opposite tilt in the moment of the spinning assembly must occur for the net angular momentum to remain at 0. As it spins, both these moments will precess, but will continue to cancel each other out. And when the joint at the blue support is returned to the original orientation, this wobbling will stop and the assembly will return to spinning in the original plane. It might make an interesting toy, but that is not what I am aiming for. My goal is to find a way to manipulate the spinning apparatus so that the plane of rotation of the entire assembly can be changed to a different (but stable!) plane. Replacing the rotating joint with a simple 'knee' joint would seem to result in the same behavior. Despite the fact that there is no net angular momentum, the system seems to resist my attempts to 'capture' it in a new orientation.

3
Push a box in a plane with friction. How to deal with the rotation?
3
How does a wheelie work?
0
Understanding work with rotational momentum/moment of inertia
0
Where does the energy used to rotate the axis of a flywheel orthogonally go?
2
Is the parallel axis theorem valid for non-rigid bodies?
22
How does a twisted piece of string/yarn wind back on itself? What kinds of forces are responsible for this?
0
Confusion About Conservation Of Energy When Analyzing This Experiment