How to determine the direction of friction force on FBD?

I am working on the following problem: 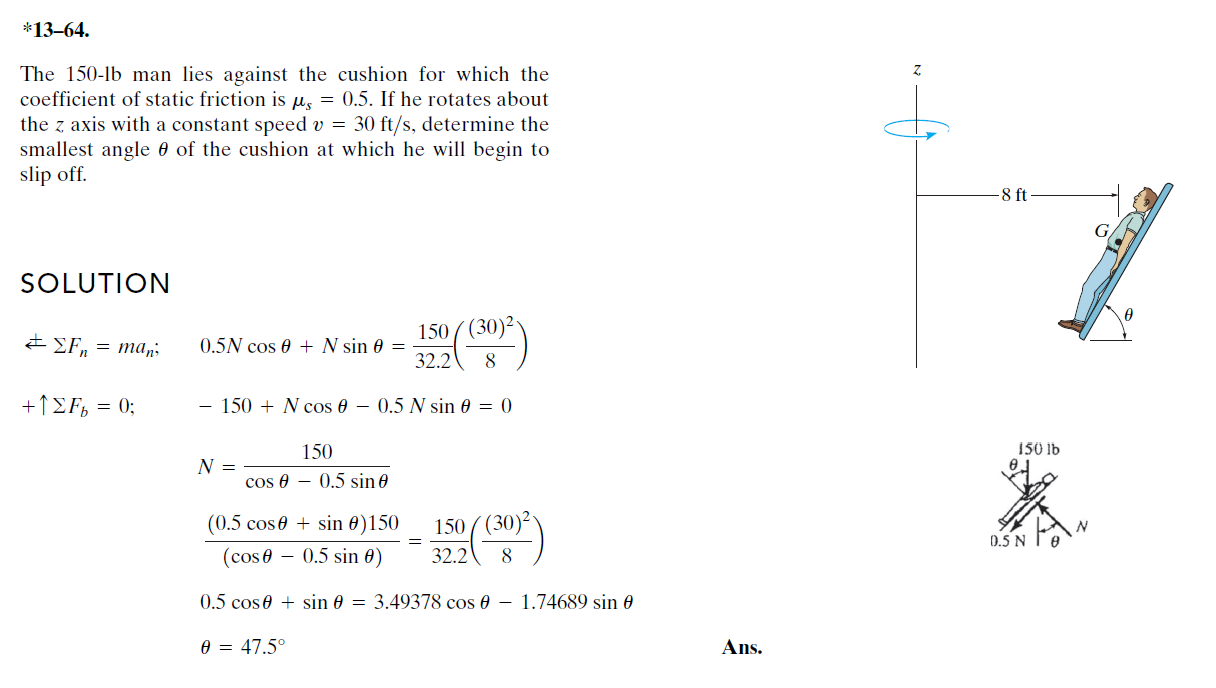 Note that 0.5*N is the force due to friction pictured in the FBD.

I tried solving the problem my way, and I do get a different answer.

You can decide on the direction of the frictional force in the following way.

When $\theta = 90^\circ$ the frictional force must be upwards to balance the weight of the man.

As you decrease the angle $\theta$ the upward frictional force must decrease because eventually there will be an angle of inclination where no frictional force is needed to keep the man rotating. This is sometimes called the "ideal" banking angle given by $\tan \theta_i = \dfrac {v^2}{rg}$.

Decreasing the angle further must mean that the frictional force now point down the slope.

Eventually that frictional force is just sufficient to keep the man from sliding up the slope. That is then the minimum angle of the slope required by the questioner.

How I would solve the problem is - Take axes along and perpendicular to the bed. From the frame of reference of rotating axis, draw the forces on the man. The gravitational, centrifugal and frictional force. Now for frictional, as you correctly said, the will be two cases :

The thing is you don't know, in general, we can narrow the direction down to two directions in opposite directions , in the equations, put f as a signed variable and you're good to go, if it comes out negative, then the assumed direction was wrong. In this particular question, the question demands logical thinking that in which case the angle would be smaller, so, start out with theta=0 {in your mind} and start slowly increasing it and mentally trying to figure out the direction of friction, ex - when theta=0.001 rad, it would be planar almost and almost circular motion, so, friction would act down {to provide centripetal force} , and as the angle increases, friction would start to act up

0
Why does friction act against the direction of rolling motion?
0
Massless rope in a pulley pulled by a person
2
Is a normal force acting on an object that is hanging from the ceiling?
2
Finding the coefficient of static friction on slope
0
Magnitude and Direction of Friction Force on Block
0
Force required when there is Friction between Pulley and String?