Why can you lift more weight with bad form?

Sorry for the lack of academia behind the subject of the question, however I'm trying to prove a friend wrong. 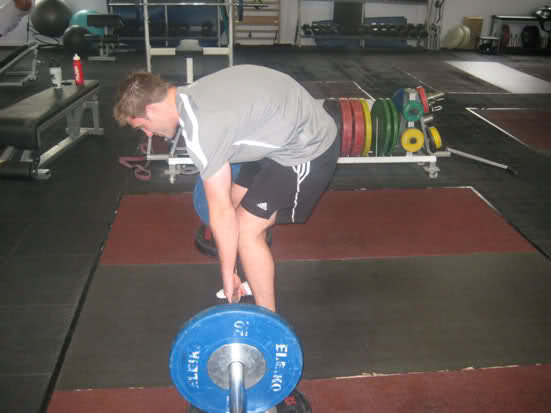 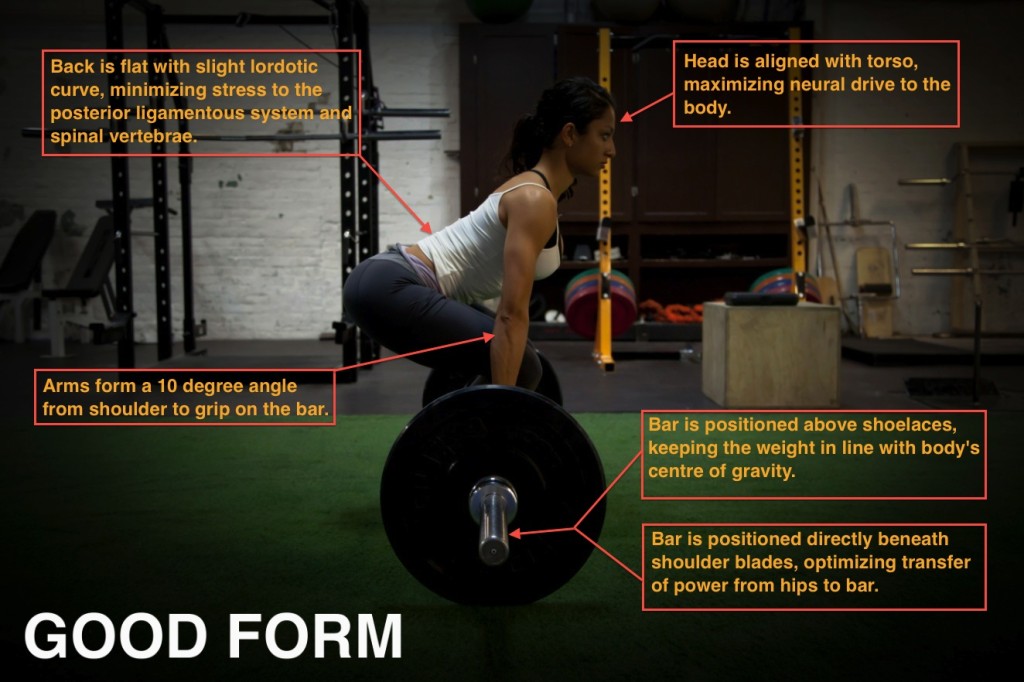 If I use the form in the first pic I can lift more than the one in the second pic, what is the science behind this>?

The human body is a tremendously complicated physics problem. However, we can make some headway into it. We can at least get to the point where we can explain why bad form may be easier for you (although its risky), but for some reason its good for other people.

When you're doing a lift, you're exercising a lot of muscles and tendons. You're not exercising all of them, but you're exercising a lot of them. In particular the "bad form" picture is not doing a good job of using the muscles around the spine. Instead, that person is more reliant on ligaments, the stretchy protective connections between bones, and maybe some relaxed muscles (depending on how much range of motion they have. The relaxed muscles may be taking some of the load).

The person using "good form" is using more muscles. More importantly, she is explicitly avoiding putting force into ligaments, and is instead using muscles to keep the joints in alignments that the body was "intended" to do. This is a big deal when it comes to weight lifting. It's really hard on your body to put weight on your ligaments over and over. Nature has placed them in a sort of "last resort" position, so you really don't want them to be your first resort. If you push your ligaments too much, you get all sorts of issues, like herniated disks.

So you noticed that you can lift more with poor form, but people say you can't. Well, you're both right. If you have not developed the muscles we rely on for "good form," then your maximum dead lift is going to involve using the ligaments. If you try the "good form," you're dependent on muscles you aren't very good at using, so you find you can't lift as much.

However, you will hit a wall with this. Ligaments never get stronger the way muscles do. You eventually reach a point where you can't lift any more because the muscles you need to use to get off of these weak ligaments are not developed. If you instead train the muscles to get strong, you can reach a higher potential. At some point, you will join the other deadlifters in noticing that you can lift more with good form than you can with bad form, because you'll have the muscle to make it happen.

Another major factor in this is "tensegrity." Tensegrity is a state of a system where every element is either in pure tension or pure compression. In the body, we want the muscles to be in tension, and the bones to be in compression. That's what each part of the body is good at. Tensegrity is a big deal in the human body. Even if nobody talks about it at the gym, much of the good advice you get centers around helping you maintain tensegrity. As it turns out, the spine is about 3x stronger if you keep it and its muscles in tensegrity than if you treat it like a big dumb roman column down your back. When people say "lift with your knees," one of the many side effects of that is that it lets you keep your back in tensegrity (even if you didn't know that's what you're doing!)

The tricky side of this is that motion in tensegrity is difficult. It turns out to be really hard to figure out which muscles need to get tensed to move in the way you want. NASA scientists are experimenting with using tensegrity for Mars landers because they're incredibly efficient with their mass, but they're having to rely on neural networks to figure out how to get them to move along the surface. We humans have a neural network, and it's a good one. It's why we can use this principle in our lives all over, and never even know we were doing it!

I mention this because learning good form is hard. People want to be lazy. However, there's a very good reason to learn good form besides the simple safety reasons. Good form trains you brain to use muscles without collapsing. It takes time to do that, and it's best done under low strain. If you deadlift with "bad form" until you hit your limit, that limit is going to be too much strain for you to learn to control your muscles properly, and you'll start to actually disbelieve it is possible to control them that well. The only solution is to decrease your weight, and do lots of slow movements, but that's a psychological nightmare for a deadlifter who is trained to keep going up towards max weight. It's really hard to tell them to go down to half or even a quarter of max weight to give the brain a chance to learn how to control things properly.

It is so obvious - due to your balance.

You can see, it is more likely to loose balance and fall forward with the bad form. The combined center of gravity seems beyond (in front) of your feet.

In good form, the cg seems to be inside (or behind) your feet, which would prevent falling forward.

I feel that the moment of inertia is behind this.The main reason I feel is that while the person in bad form is in a cats position....the radius (the distance between the weight n body's centre of gravity )is more than the case of the "good form".That would u lead to u apply more force to lift the same amount of weight.Please correct me if you think I'm wrong.

Not the answer you're looking for? Browse other questions tagged newtonian-mechanics forces everyday-life biophysics or ask your own question.

7
How can an an ant lift 50 times its own weight and pull 30 times its weight?
11
Calculating the force required to lift a weight with a screw
16
Can you ever exert more downwards force than your weight?
0
Torque and angular acceleration , moments , counterweight
4
Why does a person carry more weight when sitting down?
3
Why does a force divide equally on multiple supports/legs?
1
How should one lift a heavy object?