I have the following circuit and i need to solve Is, v1 and v2. 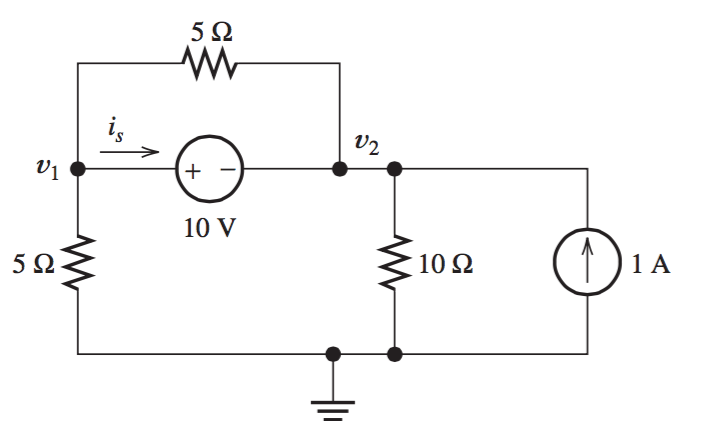 First of all, I assumed that this problem will involve supernode principle since there is a voltage source between V1 and V2.

Then, i came up with the following equation:

However, the answer that i have gotten was incorrect.

This problem is in my textbook under the section "Node-Voltage Analysis". However, I'm not too sure that the solution that i was provided for this question uses Node-Voltage analysis at all.

The solution was as follows:

I'm confused about the provided solution mainly because:

$-1$ is very clearly a current going out of the node.

You should have used $i_s$.

In this problem you have two unknowns because the voltages at two of the nodes nodes are related $v_1 - v_2 = 10$.

The next thing to note is that just because the zero of potential has been chosen for you it does not mean that you cannot choose your own and then convert the node voltage that you found with you chosen zero of potential to that given in the problem.

You can certainly solve this problem using a super node but the problem setter has given you some help by defining $i_s$.

You must be consistent when considering the currents at a node and first decide whether you are going to sum the currents leaving the node to be equal to zero or the currents coming into the node.

The same can now be done for node $v_2$ but it is probably easier to consider currents going into the node.

This will give you two equations with three unknown but two of those knows are related.

Subtracting the two equations immediately gives you a value for $v_2$.

There is an example of circuit analysis here. 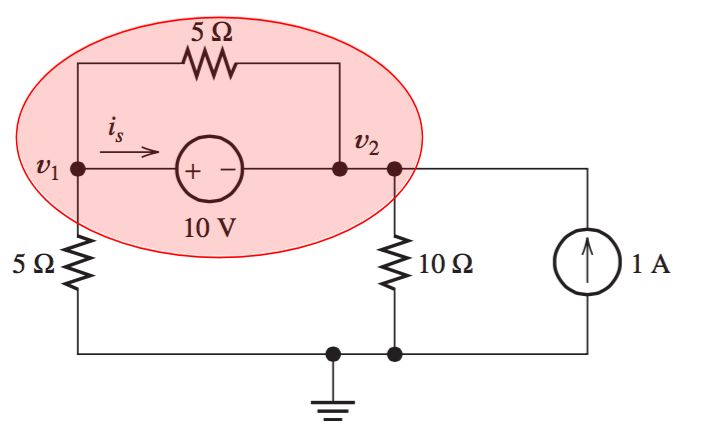 Here is a super node. All you need to do is sum the three currents either going into the node or coming out of the node. You will get an equation linking $v_1$ and $v_2$ and together with the other equation you have linking them you can solve the problem.

From what you said, I would ignore the book's solution. Not because you can't use the ground node as one of the nodes to write an equation at, but because they neglected $i_s$ when writing the equation for node1. (Note: You can use the ground node as one of your KCL nodes, but then you have to leave out one of the other nodes to have a set of linearly independent equations)

i thought that there is no current flowing through the ground and that I don't need to write down the equation for KCL at reference node.

There will be current flowing in and out of the ground node. But, just like every other node, the net current will be 0.

The reason for not making a KCL equation for the ground node in nodal analysis, is that for N nodes there are only N-1 independent KCL equations. So we gain no extra knowledge by writing equations for every node in the circuit. We typically use the reference node as the one not to write an equation for because it's often the node with the most connections (so the most complicated equation) and it might also be easy to make an error when trying to locate all the places the ground node is connected in a schematic.

All of the points connected by ideal wires are part of the same node, so the KCL equation for node 2 would be

Now, as for the actual solution...

Not the answer you're looking for? Browse other questions tagged homework-and-exercises electric-circuits electrical-resistance voltage or ask your own question.

1
The sign of the current flowing in a circuit