Why does Triple point exist?

In thermodynamics, the triple point of a substance is the temperature and pressure at which the three phases (gas, liquid, and solid) of that substance coexist in thermodynamic equilibrium. 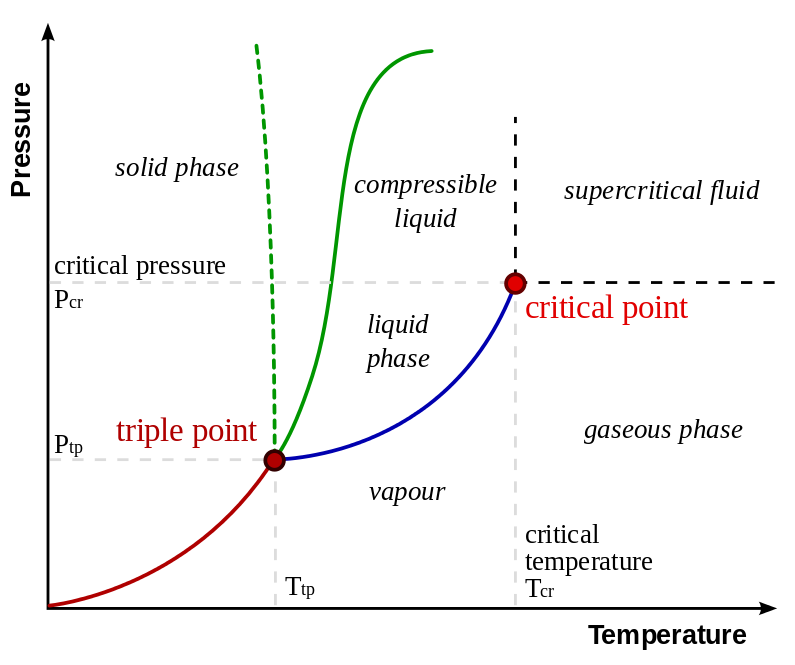 Is the existence of Triple point a coincidence?

how does one explain existence of a three way junction?

Is it the junction of a part of the graph that is under the solid,liquid and gaseous phase?

The three way junction is there because that is where the three phases (solid, liquid and vapour) of a substance can coexist in thermodynamic equilibrium with one another. At all other temperatures only two (or one) phases can co-exist together in equilibrium.

You might say that you can have ice in a beaker of water with the top of the beaker covered and eventually the ice and the water and the water vapour will all reach the same temperature. So here you have all three phases of water in equilibrium with one another and so it must be the triple point. That is not so because there is also air present which upsets the equilibrium.

Referring to the graph which you have provided which happens to be for water I think?

I imagine that you had a sample of pure water in a container and you could vary the pressure and the temperature within the container.

The phase diagram shows you for each value of pressure and temperature what will be happening to the water inside your container.

For example suppose you kept the temperature of the container at a fixed temperature which was above the triple point temperature but below the critical temperature and varied the pressure within the container starting from a very low pressure, every time waiting for the water to reach an equilibrium state.

Increasing the pressure further you would have only water liquid in your container.

If you repeated the experiment at the triple point temperature, at low pressures you would first have water vapour but at a certain pressure you would find that all three phases of water, solid, liquid and vapour, are coexist together in equilibrium.

Increasing the pressure further would result in only water liquid being in your container.

The temperature at which the solid, liquid and vapour phases are in equilibrium is well defined enough to make triple point cells containing pure substance reference points for the calibration of thermometers.

You can gauge the extent to which purity is defined by reading the section Unit Of Thermodynamic Temperature (kelvin) p113-114. They even define the isotopic composition of the water.

I not know what you meant by the word coincidence. The triple point is not unique to water.

The existence of a triple point is not a coincidence at all. It will be a necessary feature as soon as you have three different phases in your phase diagram that can all be reach from each other.

It's like when you have three countries that all share borders. By geometry alone there has to be a point were the borders intersect.

The position of the triple point, however, will of-course depend on the details of the substance at hand.

EDIT: Because thermodynamic phase diagrams can have critical points where phase boundaries terminate, the above rough explanation is not entirely true. One can think of situation where the third phase borders the critical region, as bellow: 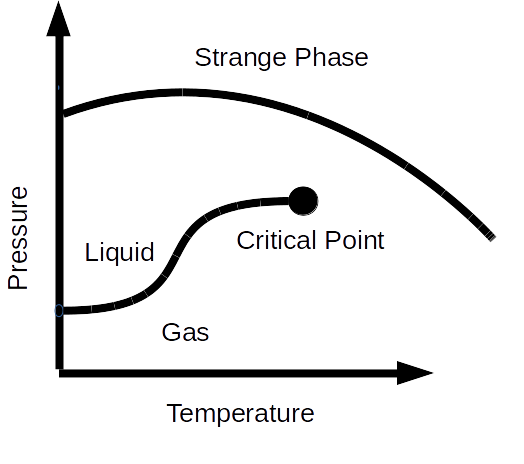 However, I know myself of no such phase.

Because liquids don't exist∗. A liquid is just a wannabe gas.

There are two phases of matter - solid (cold) which turns into gas (hot) at a certain temperature (273 K for H₂O). This process is called sublimation.

However, if heated above the sublimation temperature in a region with a certain level of pressure, the pressure prevents full sublimation. Some particles retain certain properties of a solid (intermolecular bonds, fixed size) but gain some properties of a gas (fluid shape). We call this intermediate phase "liquid".

This is the triple point, where the melting and boiling temperatures are the same. Raise the pressure further, and the melting temperature stays the same∗∗∗ while the boiling point increases. Now you can only have solid and liquid, or liquid and gas.

Analogy: a cinema. During the movie (low temperature), the audience are fixed in place (solid). When the movie is over (high temperature), they leave and spread out freely (gas). But when they stand up to leave, they're in the aisles, not fixed in place but not able to spread out properly (liquid). The liquid phase only exists when many people are trying to leave at the same time (high pressure); if you get up half-way through to go to the loo, you sublime from solid to gas (low pressure).

∗ Yes, I know. Of course liquids exist, but I find thinking of them as "weird" aids understanding.

∗∗ Individual molecules don't have a "temperature". I'm using this as shorthand for "the average kinetic energy of a single molecule of a substance at a certain temperature".

∗∗∗ More or less the same. Also, does anybody know how to use an ordinary * at the start of a line?

0
In thermodynamics, how does the triple point occur?

9
How does the temperature of the triple point of water depend on gravitational acceleration?
1
Triple points for other substances
4
How to realize the triple point of water?
4
Is it possible to have a line rather than a point where the three states of a substance can exist?
6
Gibbs phase rule and degrees of freedom at the triple point / triple line
2
Why should the vapor pressure exist at all tempratures?
3
Critical point of a pure substance
2
Why are there clear-cut states of matter instead of a gradual transition from gas to solid?