Explanation for a much simpler version of the twin paradox?

I have seen the classical twin paradox before. It uses a twin stationary on Earth and the other traveling away and back. I have seen many contradictory solutions for it, some use general relativity, others use special relativity, either way, I am still troubled by it. They always try to break the symmetry through the traveling twin's acceleration and deceleration, but never quite succeed.

So, let's do away with the classical twin paradox and let's explain a much simpler, perfectly symmetrical version of it where both twins are moving towards each other.

If I understand relativity properly:

Regardless of what their observations might be because of the Kepler effect and what not, time dilation dictates that a moving clock will absolutely tick slower than a stationary one. So, because Twin B is moving relative to Twin A, Twin B's clock is absolutely ticking slower than Twin A's. The same is supposed to be true the other way around. This is obviously a contradiction.

It is easy to see what is going on if you make a minkowski diagram. At first, when the two observers are separated and at rest, they both agree that they are the same age. This is intuitive.

Next, they begin to move toward each other. This part is basically shown in the lower half of this figure 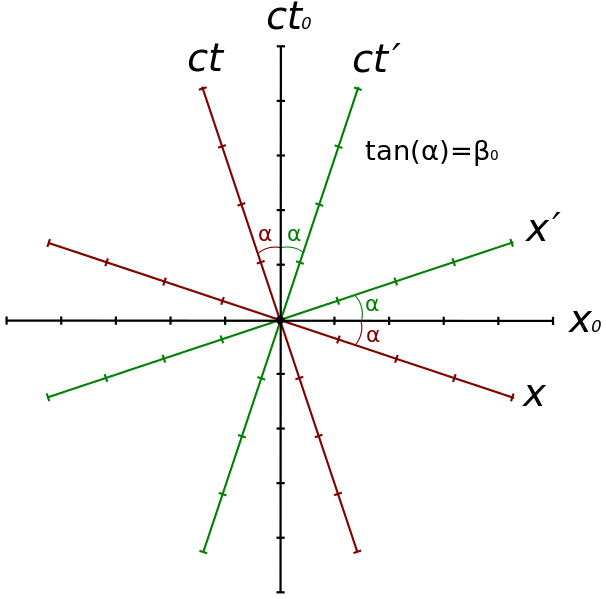 So we can see that as soon as the green guy, who starts out on the left, starts to move, his plane of simultaneity tilts up, and he sees the age of the red guy suddenly increase (the age being given by where the green plane of simultaneity intersects the red world line). So as soon as one person begins to move, they see the other person's age jump. But then as they continue to move, the other person ages more slowly, so that when they meet they have the same age.

You may want to read more about minkowski diagrams for this explanation to make sense. If someone has a better resource than wikipedia, feel free to edit it into the answer or leave a comment.

The way to think about problems in relativity is to avoid reference frames and think in terms of invariants, in this case proper time. Proper time is just path length in Minkowski space. So if the twins travel equal path lengths their clocks will measure equal durations. It's not acceleration per se that produces the paradox, it's the fact that a straight path is longest in a Minkowski metric. But if you want to see what different frames look like, just draw the spacetime diagram in one frame, like this showing AC and BD as the initial twins (quadrulets?). Intially they are stationary with respect to each other so with light signals they can synchronize their clocks. The pips on these lines mark equal proper time intervals. 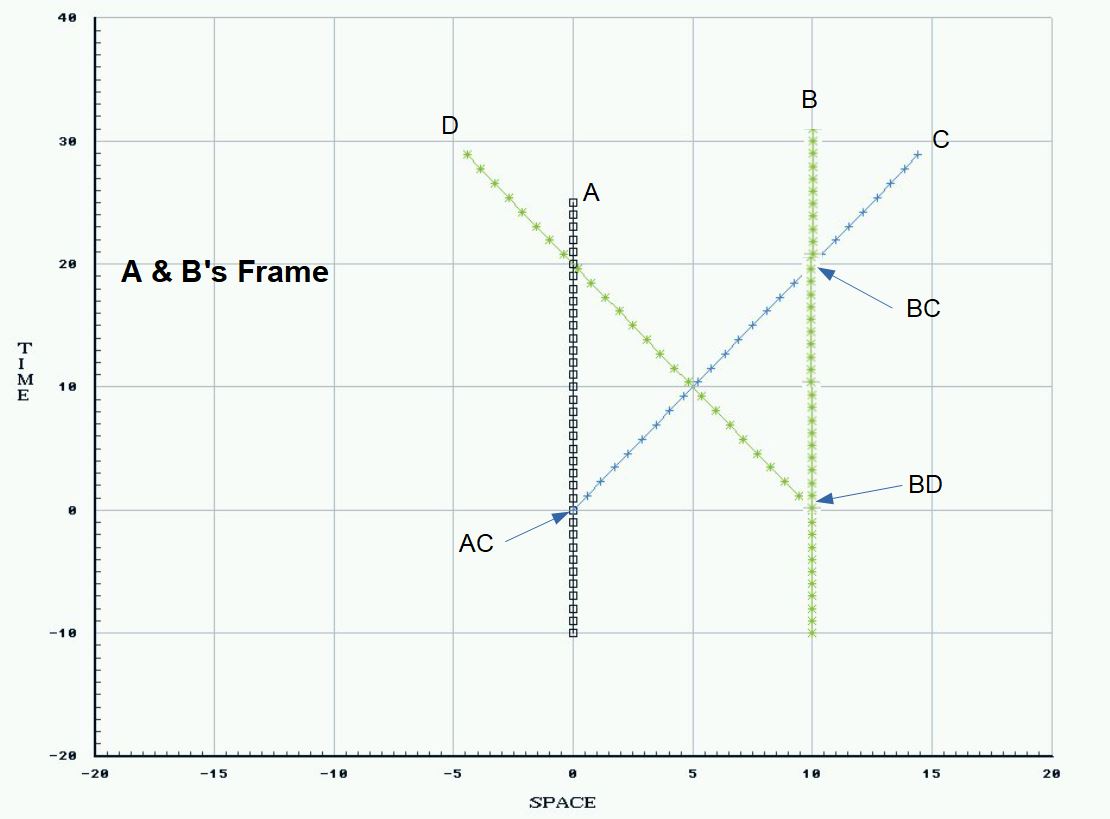 And then Lorentz transform the whole thing to another frame. In this case, the reference frame of C after he leaves A and runs toward B. 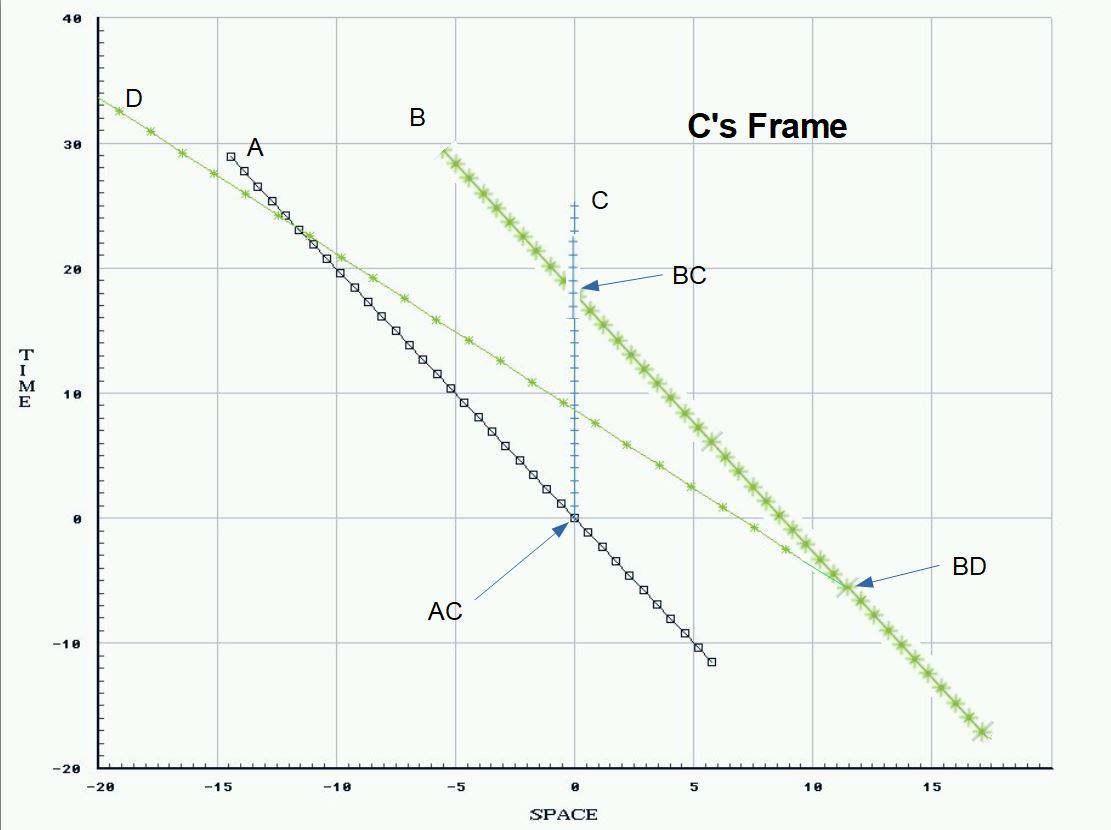 They are both standing still at the beginning of the experiment, so they're both in the same reference frame when they're one light year apart. Aren't they? For your second question, they can start when the first light of their twin since the experiment started reaches the other, so they both start moving exactly one year into the experiment.

There are three inertial reference frames to consider

The instant before the jump, Alice and Bob agree on what events are simultaneous.

But the instant after, they don't since they are now in relatively moving reference frames and so they do not agree on what events are simultaneous.

Thus, according to Alice, the instant after her jump, Bob's clock is ahead of hers and Bob is located closer to $x = 0$ than her. Likewise for Bob.

So according to Alice less time elapses on Bob's clock than hers from the moment Alice jumps until they meet. Likewise for Bob.

The more questions I see about the twin paradox, the more convinced I am that relativity is badly explained in textbooks.

Relative movement causes two effects relating to time. One is that time seems to run more slowly in a moving reference frame when viewed from a stationary one-that's the effect called time dilation. The other is that clocks that are spatially separated in a moving reference frame seem out of sync with each other when viewed from a stationary frame.

So what happens when you move through a reference frame is two-fold- the individual clocks in that frame will seem to be running slowly to you, but as you move from clock to clock they get more and more out of sync too.

There are two distinct ways to compare times between moving reference frames, and they are not equivalent. One is for a single observer in one frame to compare their time with the time at multiple points in the other frame as those points pass by. The other is for multiple observers spaced in one frame to compare the time at a single point in the other frame as it passes by each of them in turn. If you think about this carefully, you will realise that the first method measures clock synchronisation, while the second measure time dilation. They are two quite separate effects.

I am standing on the earth, halfway between Twins A and B. Each twin has a clock.

According to me: At noon, both clocks read "noon". At 6:00, the twins pass each other, right in front of me, and both their clocks, which have been running slowly, read 4:00.

Note that all three observers agree that at the time when the Twins cross paths, their clocks both read 4:00.

(The actual times in this story are not perfectly accurate; perhaps I should have written 4:32 instead of 4:00 --- it would be easy to calculate the right numbers. But the basic idea is the same.)

I've yet to see an explanation of the twin paradox that makes sense to me. At its core, the question is whether, and in what circumstances, does time dilation occur when comparing inertial frames of reference. Acceleration is a red herring, as the same results can be obtained if clock#2 passes clock#1at constant velocity. And asserting that the change in direction is the cause of differences in aging implies no time dilation if there is only an outbound journey. I think time dilation has been confirmed experimentally, though I am unaware of such proof for the twin paradox's round trip. The sole explanation for the assymetry, and consequent resolution of the twin paradox, is the fact that the origin and the destination are in the same inertial frame. Round trip or not, accelerating or not, the traveler does not travel as far as observed from the origin. Imagine trying to resolve this where there is no fixed destination, where both twins are traveling (different directions &/or velocities), or where the destination is in a frame of reference distinct from those of the twins.

5
How will the Twin Paradox become, for Time Dilation, if no acceleration was ever involved?
2
Twin paradox - a further variant
2
Relativistic spaceships moving towards each other
1
Physical interpretation of special relativity?
6
What does the accelerated twin see in the twin paradox?
0
Version of the twin paradox without accelerations