Why is my shadow deformed and not the shadow of the ceiling? [duplicate] 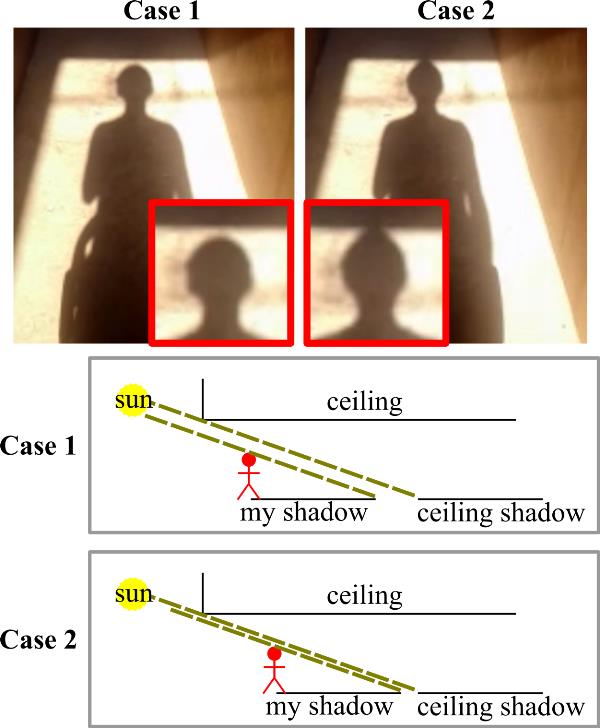 Look at these two photos of my shadow from sunlight.

Case 1: My shadow is separated from the shadow of the ceiling and my head is round.

Edit: Ok. The deformation is because the sun is not a point source and there are fuzzy shadows. But when I look the second picture only my head is deformed and not the ceiling, why?

Here is another picture.

I have notices this too. If you look carefully, your shadow is not sharp at boundaries. The boundaries has a thin band of light shadow which when you look individually is not easily noticeable. When two shadows come close, the light band of two shadows combine to form darker shadow and it looks like one of the shadows is deforming, or extending.

You see your shadow deforming because rest of the boundary of ceiling has only its own shadow. Where the two meet, only that place the two light bands combine and cause darker shadow giving an impression that your head shadow is deforming.

The thin lighter band is due to bending around the corners, do not recall what the name of phenomenon is, may be diffraction.

When the two shadows come closer, the two objects (you and the ceiling) are actually blocking light path , there is no boundary and diffraction does not take place at that location.

Not the answer you're looking for? Browse other questions tagged optics visible-light sun diffraction shadow or ask your own question.

166
Why do shadows from the sun join each other when near enough?

6
How can sunlight be white , but pictures of the sun be orange?
166
Why do shadows from the sun join each other when near enough?
445
How does light bend around my finger tip?
2
Does this shadow diffraction effect have a name?
2
Actual Jupiter seen from the place, will it looks like on the pictures?
1
Why don't flying birds have shadows?
1
if light source is bigger than the object, it is possible that shadow of the object is bigger than the object?