What is our location relative to the Big Bang?

Given what we know about space, time and the movement of galaxies, have we or can we determine what our position is in relation to the projected location of the Big Bang? I've read some introductory papers on the superstructure and galaxy cluster movements, but none of them specifically mentioned space in terms of relative or absolute positions relating to the original position of the Big Bang.

So my question is, does our current understanding of the structure and workings of the Universe give us a good enough estimate to determine our location relative to the Big Bang or can we never guess at it, since every viewpoint in our universe looks the same in every direction?

Current cosmological theorists suppose that the universe is exactly identical, no matter where it is viewed from, so long as it is viewed at the same time. At the time of the big bang, the distances between any two given points seems to shrink to zero (or some nonzero value that we supposedly will derive from quantum mechanics). The conclusion is that the Big Bang happened everywhere, all at once.

This is also how you get out of the 'was the big bang a black hole?'-type questions: even though you had large concentrations of matter at times close to the big bang, they were spread out over all space, which is different than just having a clump of matter with finite extent (the second thing would collapse to a black hole).

Think about the big bang like this: if you took every possible trajectory that an object could possibly take through the universe, and traced them all backward in time, they would all eventually come together. That "merging of trajectories" is the big bang; all objects, and indeed all of space, would have been at the same position. So there's no one point in the universe that can be considered the location of the big bang.

Right now, $a$ is getting larger with time. But if you imagine running the universe's expansion in reverse, eventually you'd get back to a "time" when $a = 0$, and at that time all objects would be in the same position. That's the big bang. (Adapted from another answer)

Our location is around 13.7 billion light years away from it in time.

I think Henry made these two minute physics videos(Where Was The Big Bang? and Science, Religion, and the Big Bang) specially for you:

As a short answer, the big bang happened everywhere! So anyone, anywhere(to be super cautious and conservative in an inertial frame) can say I have been at the center of the Big Bang :)

It is theoretically possible, but quite difficult to determine the position where we would be if our proper motion had zero speed.

The local group to which our galaxy belongs has proper motion of about 61 km/s. Our galaxy and Sun inside galaxy has even greater speed, but the direction is changing as Sun completes its revolutions about the galactic center.

So combining all these speeds and reversing all the dynamics back you will find a point where our Earth would be if it did not move since the Big Bang.

But you will find nothing special there. 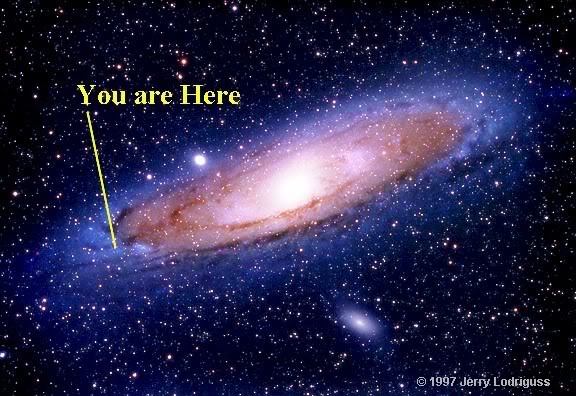 Big bang happened somewhere in the middle... edges... and everywhere at once.

Not the answer you're looking for? Browse other questions tagged cosmology spacetime universe big-bang popular-science or ask your own question.

1
How much real and how much relative is our universe?
4
Does Big Bang Cosmology imply/require infinite space?
1
Big Bang…or…Everywhere Stretch?
2
If we could only see as far as our galaxy cluster, what and how would we know about anything beyond it?
0
How astronomers estimate the redshift of galaxies clusters?