How is energy conserved in this electromagnetic scattering?

I have been pondering over an energy conservation issue for a few weeks and would like to share it with the hope that its interesting and someone will be able to answer.

Suppose I have two positive charges at $(-a,0,0)$ and $(a,0,0)$ connected by a spring in such a way the the above positions are equilibrium positions. Now suppose I shoot a massless positively charged particle moving along the y axis in such a way that it passes the x-axis at time t=0.

According to Jackson problem 11.18 the electric and magnetic fields of the massless particle exist only in the x-z plane passing through the instantaneous location of the particle and are given by

Thus, while there is a force on the massless particle when approaching the x-z plane, there is no force by the massless charge on the massive charges connected by springs except for an impulse at $t=0$. This impulse gives an equal and opposite momentum to both the charged particle.

We are left with the two massive charges oscillating. Where does the energy come from? It is tempting to say the energy comes from the field but how? At the end of the day, due to radiation losses the charged particles will go back to being at rest at $(-a,0,0)$ and $(a,0,0)$ and the only difference would be the field configuration produced by them. The massless particle seems to have just come along for a ride.

Is there a true degeneracy in that there are two field configurations with charges at $(-a,0,0)$ and $(a,0,0)$ with the exact same energy? 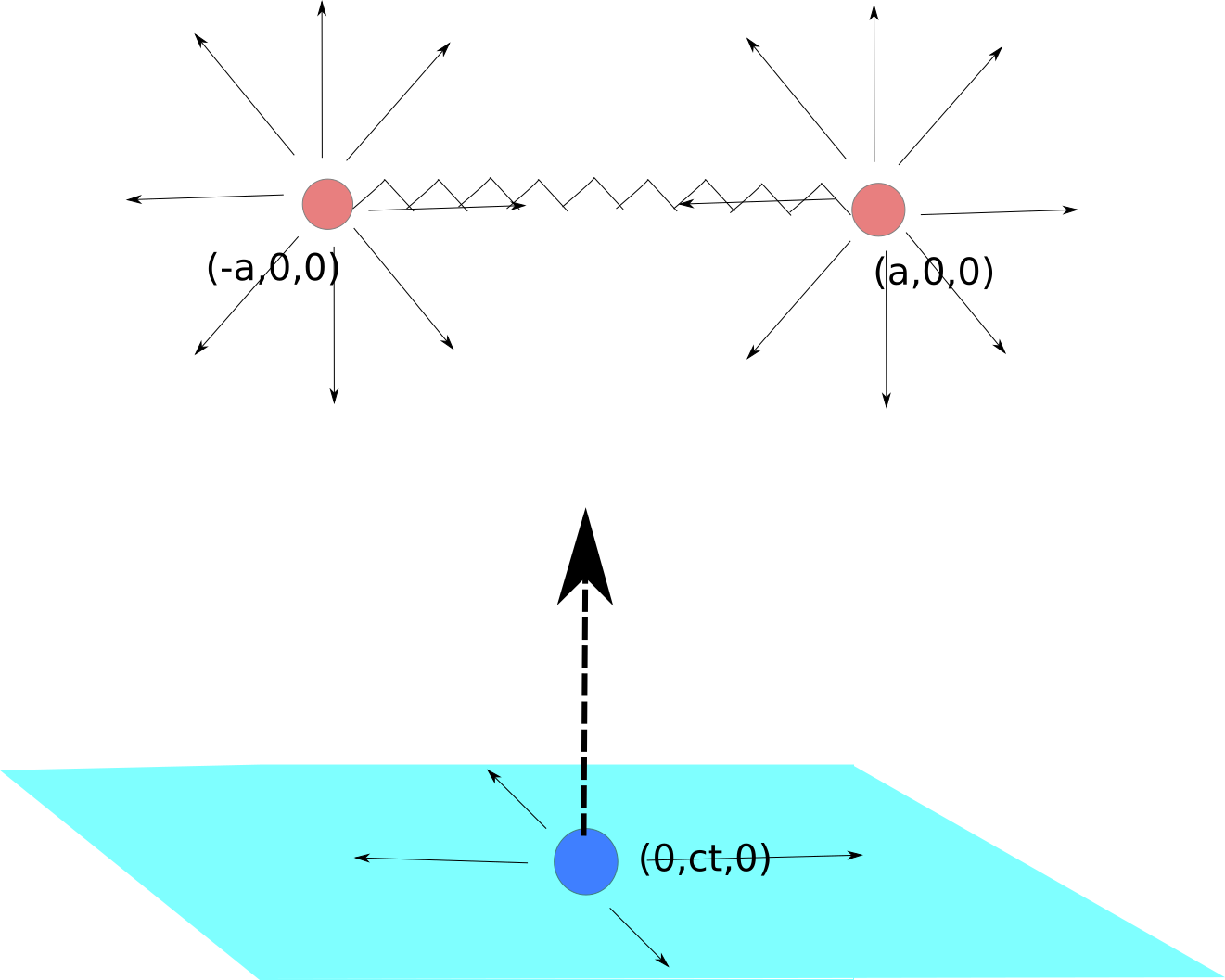 Jon has a point when he says that you shouldn't be treating the motion of the massless particle as a classical (i.e. non-relativistic, non-quantistic) one, except that he left out the reason. I'll try to explain why it is so in what follows.

$$ \vec{F}=m\vec{a} $$ not even in the relativistic approximation, as $m=0$ in this case and there is really no non-relativistic approximation for massless particles. In passing to the relativistic (exact) formulation of the motion of a massless particle, one should derive the law from a variational principle. I hope you have at least heard of such a principle. It says that a point-like particle moves in orbits that minimize the value of some integral taken along the orbit. For example, in the classical case, the integral $\mathcal{S}$, called the Action Integral, is $$ \mathcal{S}=\int_{t_{1}}^{t_{2}} dt\ \ \mathscr{L}(\vec{r}(t),\dot{\vec{r}}(t))=\int_{t_{1}}^{t_{2}} dt\ \ \left[\frac{m\,\dot{r}^{\,2}(t)}{2}-V(\vec{r}(t))\right] $$ where $V(\vec{r})$ is the potential energy of the particle. Applying to the "Lagrangian" $\mathscr{L}$ what are called the "Euler-Lagrange equation", $$ \frac{d}{dt}\frac{\partial\mathscr{L}}{\partial\dot{\vec{r}}}=\frac{\partial\mathscr{L}}{\partial\vec{r}} $$ you recover the Newton equation $$ m\ddot{\vec{r}}=-\vec{\nabla} V $$ As for massive relativistic particles in an electromagnetic field, the action is (it may be missing some factors of $c$)

$$ \mathcal{S}=\int_{a}^{b}\ ds\ \left\{-m\sqrt{g_{\mu\nu}\frac{dx^{\mu}}{ds}\frac{dx^{\nu}}{ds}}+eA_{\mu}\frac{dx^{\mu}}{ds}\right\} $$ where $s$ is an arbitrary parameter (you can't use time as a parameter in relativity. This action is valid even in curved spacetimes, by using a metric $g_{\mu\nu}$ different from the Minkowski metric). Applying the Euler-Lagrange equations, you get the relativistic equation for a massive particle, namely $$ \frac{d}{dt}\ \frac{m\vec{v}}{\sqrt{1-v^{2}/c^{2}}}=e(\vec{E}+\vec{v}\times\vec{B}) $$ (the derivation is somewhat complicated by the fact that you're not using the time $t=x^{0}/c$ as an independent variable, I'd rather not write it all here, so just trust me). This action doesn't work for massless particles as much as the classical one doesn't, too. In fact, should you set $m=0$, the kinetic term of the Lagrangian would cancel out, and this is not allowed. How should one then describe the motion of a massless particle in special relativity? One simply doesn't. Special relativity is written precisely in order to prevent particles from reaching the speed of light. Notice that photons are not massless particles, at least not in the classical sense. That of photon is a quantum concept. Photons are quantum massless particles, and no quantum particle has a definite position (at least in the sense in which a single photon is intended to be a particle), hence no definite trajectory in physical space. There is one way out to derive massless trajectories in classical (relativistic) physics, which reproduces what you tried to do. Write the action as follows: $$ \mathcal{S}=\int_{a}^{b}\ ds\ \left\{-\mu\sqrt{g_{\mu\nu}\frac{dx^{\mu}}{ds}\frac{dx^{\nu}}{ds}}+eA_{\mu}\frac{dx^{\mu}}{ds}\right\} $$ and use the Euler-Lagrange equation $$ \frac{d}{ds}\frac{\partial\mathscr{L}}{\partial\dot{\mu}}=\frac{\partial\mathscr{L}}{\partial\mu} $$ You simply get $$ \sqrt{g_{\mu\nu}\frac{dx^{\mu}}{ds}\frac{dx^{\nu}}{ds}}=0 $$ i.e. $$ \left(\frac{dx^{0}}{ds}\right)^{2}-\sum_{i=1}^{3}\left(\frac{dx^{i}}{ds}\right)^{2}=0 $$ or, dividing by $\left(dx^{0}/ds\right)^{2}$ $$ |\vec{v}|=c $$ Notice that the electromagnetic field does not appear here. This is because the electromagnetic field cannot modify the motion of the massless particle. In terms of the particle's dynamics, the former action is completely equivalent to $$ \mathcal{S}=\int_{a}^{b}\ ds\ \left\{-\mu\sqrt{g_{\mu\nu}\frac{dx^{\mu}}{ds}\frac{dx^{\nu}}{ds}}\right\} $$ which is the action of an uncharged massless particle, i.e. the particle is not charged. On the other hand, the second term couples to the electromagnetic field, i.e. the particle produces an electromagnetic field. So you get a particle which is both interacting and not interacting with the EM field: the interaction is not two-way as it should be - this violates Newton's third law, too; moreover, the massless particle (in this formulation) does not carry a kinetic energy, nor it has a well-defined momentum. It really is some strange kind of ghost particle, that violates nearly every physical law that we know. This is not something remarkable, it is just the sign that something is terribly wrong. On the other hand, quantum massless particles can be charged (even there, they come with their own problems, but these can be dealt with). How it is so would require a pretty long discussion. Let's just say that the mass value $m$ in the quantum (field) Lagrangian of a particle doesn't multiply the kinetic term; then it can be freely set to zero. This is why massless particles should not be dealt with in classical physics.

P.S.: As for Jackson's formula for the EM field produces by a massless particle, it should be right; however, you should interpret it as the unphysical limit of a perfectly reasonable (for $m>0$) formula.

0
How is momentum conserved in this electromagnetic scattering?