The recently detected gravitational wave at LIGO were extremely small - requiring a $1 billion interferometer to even detect its presence as it passes Earth.

The gravitational constant G is small: ~$10^{-40}$ times that of the electromagnetic coupling for protons. But then, there are lots of really massive, energetic things in the universe - much more massive than the black hole merger that was observed - so my question is:

Are there any potential sources of significantly greater gravitational waves that could be detected without sensitive instruments?

As one commenter pointed out, this is a little like asking what a lethal dose of neutrinos would be. In Randall Munroe's words: At what point do these two unimaginable things cancel out to produce an effect on a human scale?

The universe is big. But that doesn't mean it hits you all at once.

For background, consider Obler's paradox. Stars that are far away send less power to us because they are far away. But there are more stars far away. So how come the sky is dark at night? You might expect that the big universe full of so many stars would be quite bright, with as much power coming from each distance and distances going on and on.

And it's a valid concern. The answer is the sky is dark at night becasue stars haven't been shining around forever. When you go farther out, there are more stars, but the ones we see from far away and the ones that were shining long long ago. And there were less stars shining back then. If you go far enough back, there were no stars. So for large enough distances we actually get no starlight, rather than the same amount from a simple argument of more stars and less power from each one but with an equal amount of lower since the more and the mess both increase by the same factor).

So you have to ask yourself, when did black holes form. How often to they emit waves. And then how many are close enough that they firmed and emited in time to get here. Those quantitative details matter.

So, when did they form. First, a stellar black hole requires that first you have a star. So you had to wait for stars to form, then wait for them to form black holes. So if you go out far enough where the waves from there would have had to leave before that happened then that's a distance that contains the things we'd see.

So instead of the whole universe we now just have a giant sphere. Then you'd say that the ones farther away the waves the emit would have to be stronger when made to be strong out here. So the farther away ones, there are more black holes overall, but you have to only look at the stronger mergers, so you get a smaller number of detectable events for those larger distances. And then if each merger only releases energy for a brief period of time. So you expect only a small percentage of its lifetime is it something detectable. So its a fraction of that population of stars that is going to count for what your detectors see in a time interval.

And you can attack the problem on two ends. From the theory side you can model formations of stars and galaxies and black holes and see how often you get stars that form black holes of different sizes and how often they merge and compute how often you expect to get each kind of merger. Or from the experimental side you can look at the data about how many observations we see.

And LIGO isn't new, its been running for a while. It's newly increased its sensitivity. But if stronger sources were common, the less sensitive runs would have likely responded.

But this only tells us about direct detection. If a strong wave can trigger another event, such as making a gamma ray burster burst, then we do know that happens. And we do know those can be dangerous.

Watch out for the universe getting older. If newer super super super structures can form that never existed before, the first ones that form will be a certain distance to us and might be dangerous. And then newer ones could form later and be closer to us.

Going back to Obler's paradox, its just like if you were billions of years old you might have worried about these new "star" things the first time you saw one. And then next one might have formed a bit closer and the next one a bit closer, and eventually when the sun formed just 1 AU you might be like, wow, that's a lot of energy coming at me, that's new, its more energy consistently every second in this energy band than I'm used to getting from everything else altogether.

But dark energy is making it do a smaller and smaller amount of the universe will be able to affect us. So eventually it might just be our local group and nothing else. So a boring future might be the big risk if we survive the small number risks between now and then.

Here are the four fundamental forces: 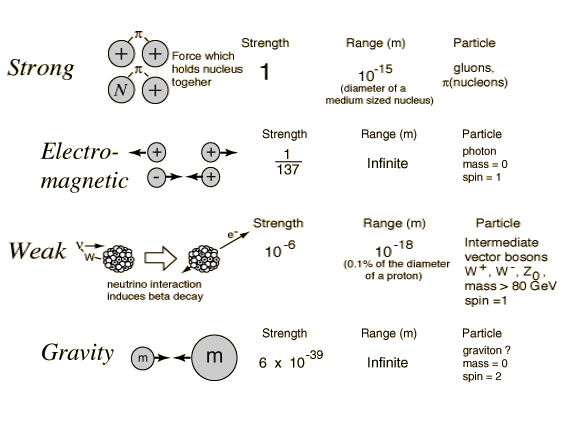 What is important is the column that shows "strength" and is connected with the word "large" in the title of your question.

are there sources of significantly greater gravitational waves that could be detected without sensitive instruments, or even be disruptive to daily life?

Fortunately our planetary system is far away from possible cosmic generators of gravitational waves .

So stronger waves might be detected in the future but they would still need the specially designed instruments.

Are you simply asking whether we should worry that there is an unseen menace about to unleash a "gravitational wave tsunami" upon the Earth? You shouldn't be.

Let's take the empirical evidence. The only source to have been detected is a large black hole merger. The event rate in the universe is only constrained by this and some theory to be at most about 100 per cubic Gigaparsec per year. The strain due to the event peaked at about 1 part in $10^{20}$.

To produce something "visible" (or maybe tangible?), let's say this needs to be bumped up to 1 part in a thousand (and remember this whole event only lasts for a fraction of a second). The strain decreases reciprocally with distance from the source, so the volume from within which the source could be detected decreases by the strain amplitude cubed.

So, if the current detection rate is 1 per month at a strain of $10^{-20}$, then it will be 1 every $10^{51}$ months for strains of $10^{-3}$, assuming that the sources are uniformly distributed in space and time. Scaling from the distance of the detected GW source, I note that the source would need to be well within our solar system. Gravitational waves would be the least of our problems should a pair of 30 solar mass black holes blunder into the solar system!

Of course you might argue that there could be other types of less extreme objects (in our solar system) that might be more common. Had there been any reasonable chance of detecting GWs from nearby sources at much higher strains (and recall that LIGO did operate at lower sensitivity for many years), then a lot of money could have been saved! Alternatively you could argue that there are rarer events involving more massive objects that produce GWs at lower frequencies than LIGO's sensitivty range. This is entirely possible and indeed likely - merging supermassive black holes could produce strains that are several orders of magnitude higher ($\sim 10^{-16}$ for a pair of $10^{8}M_{\odot}$ black holes at 1 Gpc distance - Ravi et al. 2013) at $\mu$Hz. Nevertheless, such an event would still need to be in the solar system (at 20 au) to produce strains of $10^{-3}$.

Not the answer you're looking for? Browse other questions tagged astrophysics gravitational-waves estimation or ask your own question.