Why do the tones differ when tapping on a different part of a coffee cup?

Let's say we have a coffee cup as shown below. 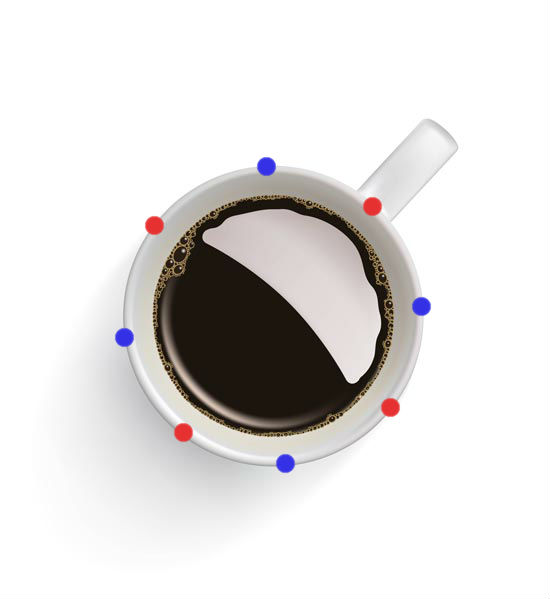 The cup is, in contrast to what's shown on the image, empty (I had some trouble finding free good-quality top-view coffee cup images). When we tap on $\frac14,\frac12,\frac34$-th of the coffee cup (measured from the "ear", not sure what that's called in English), showed with the red dots, the cup makes a lower sound then when we tap on $\frac 18,\frac38,\frac58,\frac78$th of the cup (shown by the blue dots). I have tested this on multiple types of cups and is thus definitely not an opinion-based question.

Why is this? Please make your answer as simple as possible, as I'm just a simple mathematician, and know nothing in particular about physics (although I have a basic understanding, of course).

The answer is related to the asymmetry of the cup.

The sound is, as we know, is resulting from the vibration of the cup. For a qualitative explanation it suffices to compare it with a vibrating disk, like the image below.

This shows only the main modes, which is the main one (the ones with higher amplitudes) in the infinite series, but the following reasoning applies to all of them.

The image shows a vibrating circle, but it would have similarities with the cup if you imagine the center pushed down. I will refer to the lines in the surface which do not bend as the "axes". We can see for this mode there are 2 axes.

Tapping on the red dots makes the cup's axes for this mode to lay along the blue dots. So unlike the our circle in the image, one of the vibrating quarters is unequal to the rest, it has the added mass of the ear. Hence it will vibrate slower than in the opposite case...

Tapping on the blue dots, the ear falls on one of the edges and almost does not move. The four quarters are equal and lighter than in the previous case, and move lightlier and hence produce a higher frequency.

If you look at the animation in the animation that @mhleo provided you will see that there a positions with no movement called nodes and positions where the amplitude of motion is maximum called antinodes.
The node to node distance is equal to half a wavelength of the sound wave in the cup and that is also true of the antinode to antinode distance.
The longer the wavelength the higher the frequency so if you double the wavelength you halve the frequency.

It is likely that the part of the cup with the handle acts as a node because of the increased mass in that region.
Where you tap the cup also probably produces a node.

Tapping on a blue spot produces nodes at all the blue spots and also at the red spots because of the presence of the handle. So the node to node distance (red dot to blue dot) in this case is half that of the blue dot to blue dot distance mentioned before.

Not the answer you're looking for? Browse other questions tagged acoustics resonance vibrations or ask your own question.

4
Why does music have a different tonality when heard from earphones a distance away?
31
Why does the sound pitch increase on every consecutive tick at the bottom of a filled cup of coffee?
1
When does the observed wave velocity differ from the actual wave velocity in the Doppler effect?
1
Why i don't hear the wind, when the ear faces it?
0
Why consider only real part when summing several simple harmonic motions?
0
Why do sound waves hang together when traveling at different speeds? (i.e., being refracted)
0
Why will a guitar string "ring" when I resonate my vocal chords at the same pitch as the string?
1
Why do we hear louder sound when the source is in a resonator?
1
Why the prongs of a tuning fork have different oscillation phases?