How does Newton's 2-prism experiment help to explain why light does not get dispersed into 7-colors in a parallel glass slab? [duplicate]

Ask Question
Asked 9 years, 9 months ago
Active 6 years, 5 months ago
Viewed 18k times
2
$\begingroup$
This question already has answers here:
Can anyone explain to me why light is not dispersed into a spectrum through a parallel glass slide, but only through a prism? (3 answers)
Closed 3 years ago.

In a real parallel glass slide(with two prisms imagined to be touching each other to form a parallel glass slide),
The ray of light should pass through the Z in between without any dispersion or change in direction because the density in both of the prisms is the same(and they are touching each other). So Newton's experiment won't help in explaining this because in it, there is a vaccum(or air) in between and hence the change in direction of light. I hope that you are getting me, if not I'm ready to elaborate more.

[In case anyone is wondering that I did post a Q about dispersion earlier too, then that is true - but I did not get the answer of the question that I really meant to ask and hence this, I hope that you guys will help me better understand this.]

So Newton's experiment won't help in explaining this

No, it does explain it.

First, I'd like to dispel a confusion regarding dispersion. In both cases (slab/prisms), we have no angular dispersion, but we do have lateral dispersion (image stolen from @Amu's post) 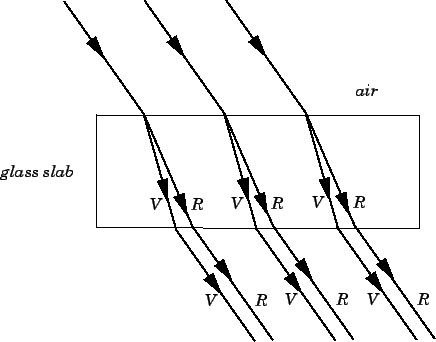 The colors do split up, and if you used a thin slit of light, you would get an outgoing slit with coloring at the edges (you may get a rainbow if it's thin enough). For a thicker "beam", adjacent rays overlap when they split, producing white light. But since the rays are parallel, the amount of dispersion does not change.

In a single prism, on the other hand, the rays don't come out parallel--they have an angle between them. And thus the lateral dispersion increases as you go further from a prism, giving a clear rainbow.

In double prisms, depending on the distances, you may or may not see dispersion on a screen.

Actually, the correct experiment is displayed by this xkcd comic:

Alright, back to the question.

Imagine taking the double-prism in the diagram above and bringing the two prisms closer to each other. The dispersion in the center "z" will decrease till it becomes zero. And then, it becomes the same as a slab--it's as easy as that :). I think that the diagram you have is slightly wrong, I'm not sure--since it's not directly supporting this. I may have to look for some more diagrams and compare.

Remember that a zero-width film of any material has no effect on a ray of light, provided that there's no total internal reflection going on.

In the image, the rays which make up the incident beam are shown far apart from each other for clarity. In reality, these rays are extremely close to each other and so are the emergent rays. Hence the adjacent red and violet rays, being parallel to each other, mix up and produce white light.

7
Can anyone explain to me why light is not dispersed into a spectrum through a parallel glass slide, but only through a prism?
0
Where does dispersion actually take place?

7
Can anyone explain to me why light is not dispersed into a spectrum through a parallel glass slide, but only through a prism?
1
Can light be rotated using lenses or prisms?
2
Do all smoothly curved pieces of transparent material have a focal point?
11
Why do convex lenses not disperse light like prisms, given that entry and exit points aren't parallel?
1
Dispersion through Glass Slab
2
Is the equation for dispersive power applicable for all dispersive elements?
2
Does recombination of light in a glass slab happens in the same way like in Newton's inverted prism experiment?
0
Why doesn't a parallel slab disperse white light?
1
Why we don't see a spectrum of colours above water?