Is it possible to witness a circular rainbow?

What conditions would make it possible to see a naturally occurring fully 360° circular rainbow? Would it even be possible?

Glories come to mind. They are easily seen airborne as mentioned by Vineet.

One can also produce a full rainbow in the lab by reflecting light off tiny glass spheres. Frank Crawford (of Berkeley physics Waves) has described it beautifully in an AJP article. He called it "Rainbow dust".

A friend of mine reproduced this effect in the lab sometime back. Here is the picture. 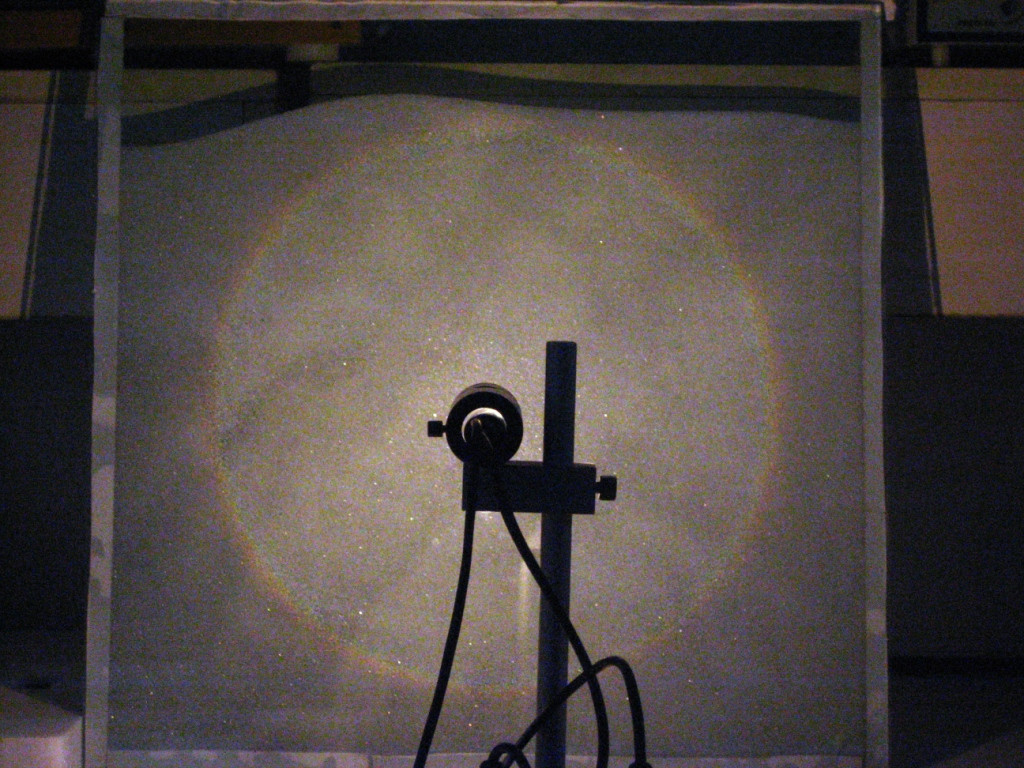 You can generate a circular rainbow using a garden sprinkler on a sunny day. The top of the rainbow is usually easy to spot - but, by spraying water drops near your feet, the bottom of the rainbow should also become visible.

Waterfalls are great places to see natural rainbows - and, if you are lucky, you might see a circular rainbow, as captured in the video at http://www.philiplaven.com/p5a.html

Most of the "circular rainbows" shown on the web are NOT rainbows! Remember that rainbows are huge: the red arc of the primary rainbow has an angular radius of 42 degrees, thus a full circle rainbow has a diameter of 84 degrees. To capture an entire circular rainbow, you need a camera with an ultra-wide-angle lens (e.g. a fisheye lens).

If you have a picture of a SMALL circular rainbow taken with a normal lens, it is almost certainly a glory. Glories typically appear as one or more coloured rings on clouds surrounding the shadow of an aircraft. Glories usually have an angular radius of less than 5 degrees.

Yes it can be seen, rainbow can be considered as a set of points which form an angle of $42^{\circ}$ with the sun and our eyes, which comes out to be a perfect circle with center at our shadow made by the light coming from the sun. Usually we see a rainbow from ground and from there these set of points form a semicircle in the atmosphere. But if we observe a rainbow from high enough altitude we can see a complete circular rainbow. 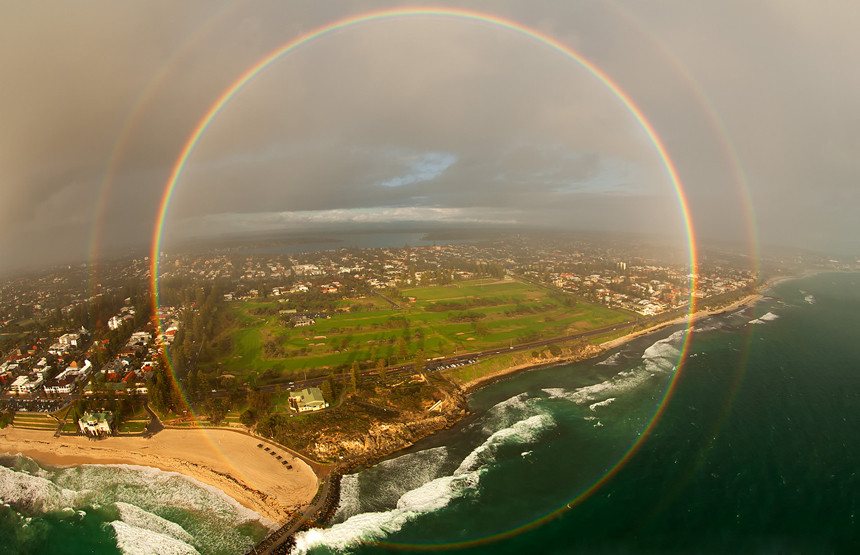 Go to the Niagara falls on a sunny day, and you can see there a beautiful circular rainbow creeated by dispersion at the tiny drops of the hazy mist created by the waterfall. I have seen it and was very impressed.

Yes it's possible. Although small in size, I captured one during a flight.

Not the answer you're looking for? Browse other questions tagged optics visible-light refraction or ask your own question.

1
How can a 360 Degree Rainbow be formed?
0
Why can't we see Rainbows from its end points?
3
What makes a rainbow happen?
5
Why is rainbow always circular?
3
Why can't we reach the ends of rainbow?
1
Why is a rainbow in the sky always an arch?

0
Colors in the secondary rainbow reverse of that in the primary rainbow
3
What makes a rainbow happen?
7
How deep is a rainbow?
5
Why is rainbow always circular?
9
Rainbow in cloud near Sun
2
How does the white color inside/below a rainbow arise?
13
Is it possible to calculate the distance to a rainbow by using the parallax method?
4
If all raindrops were small transparent ice cubes how would the rainbow look like?