Does every force applied to a rigid(assumed) body results in strain (in molecular level)?

If force is applied to a rigid body and the body moves/remains still/vibrate or anything. But, we assume there is no strain.

If you believe in Newton's third law then a body must deform in some way or other to apply a reaction force to the external action force.

Without the force acting the molecules will be at an average equilibrium separation with the (average) net force on each molecule being zero.
Applying an external force will change the separation so there will be forces produced by the block which will be opposite in direction to the external force.

Of course it is not a perfectly rigid body rather it is a real body whose shape does not change very much on the scale of the other changes taking place. So a compression of 1 $\mu$m will usually not make much of a difference if all the other lengths are of order metres.

"In physics, a rigid body is an idealization of a solid body in which deformation is neglected. In other words, the distance between any two given points of a rigid body remains constant in time regardless of external forces exerted on it."

A rigid body is basically an assumption and hence in the boundaries of this assumption it does not undergo any strain even in the molecular level.

All molecules in a solid are held together by intermolecular bonds. When the solid is pulled in one direction, these bonds are indeed put under some stress but provided the external acceleration does not exceed the magnitude of the internal forces, the object is able to maintain its shape.

But consider a bullet hitting a steel plate for example. The force of impact is often so large that the intermolecular forces will not be able to keep the bullet in shape and it mushrooms or even splatters across the plate.

So indeed under very extreme accelerations solids can lose some of their "solid behaviour".

This does not apply for rigid bodies because they are a theoretical approximation of a solid.

A rigid body cannot be deformed.But the stress is same as of elastic body(follows hooks law) along the length. 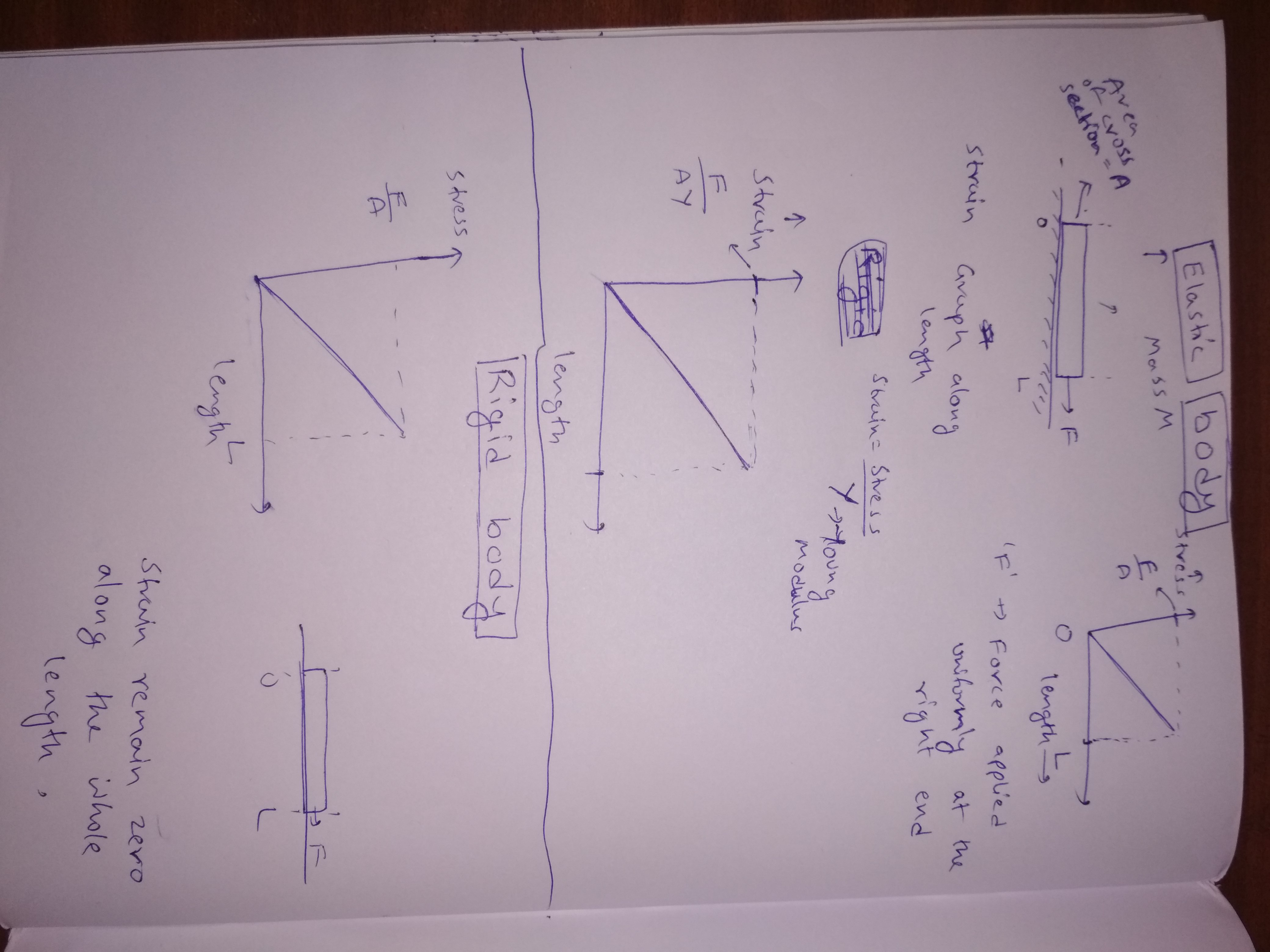 Not the answer you're looking for? Browse other questions tagged atoms elasticity molecules or ask your own question.

1
Vibrationing molecules/atoms and the effect
2
Elasticity of a body on which variable force is applied
1
How do atoms in a solid “communicate” force to each other?
104
How can we see an atom now? What was the scale of this equipment?
0
How does tension work for a simple pendulum? What force is at play to keep a rigid body from stretching?
1
Change in Volume of Objects on applying stress
0
Why does water flow downhill?