Why does conservation of étendue matter when showing one cannot focus light to arbitrary temperatures?

The latest XKCD What-If post discusses how one cannot start a fire by focusing the light from the moon.

The answer is no, for well-established reasons, but the explanation isn't watertight.

Maybe you can't overlay light rays, but can't you, you know, sort of smoosh them closer together, so you can fit more of them side-by-side? Then you could gather lots of smooshed beams and aim them at a target from slightly different angles.

Nope, you can't do this.

It turns out that any optical system follows a law called conservation of étendue. This law says that if you have light coming into a system from a bunch of different angles and over a large "input" area, then the input area times the input angle equals the output area times the output angle. If your light is concentrated to a smaller output area, then it must be "spread out" over a larger output angle. 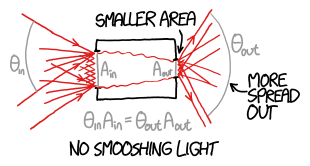 In other words, you can't smoosh light beams together without also making them less parallel, which means you can't aim them at a faraway spot.

But the spot doesn't have to be faraway. From the diagram above, one could perhaps hold a piece of paper extremely close to the smaller area, so that even though the light is more directionally spread out, it doesn't matter because it hits its target after a negligible distance.

It seems to me that this effect isn't important -- one should be able to focus the sun/moon to a higher temperature based on this principle.

Why doesn't this argument work? 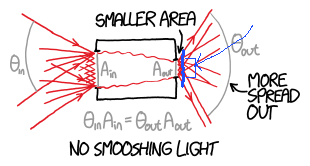 I think the other answers here, while good, are missing a key concept, so I'm offering some additional insight.

First, let's consider your example of putting your receiver right at the output of the concentrating optic. This is a great idea! In fact, it's what nearly all concentrating solar cells do to get the light into the cell, and they concentrate sunlight upwards of 1000x!

Now, let's identify the gap in reasoning. You've already accepted that conservation of etendue constrains the area and angular spread at the output. In a real optical system etendue can stay constant, which is the thermodynamically limiting condition, or increase, which means entropy is being generated. In fact, allowing the area to increase without decreasing the angular spread is precisely what happens in the XKCD comic. It's generating entropy and getting worse. In fact, the etendue or angular extent can also go down - BUT - not without rejecting power.

Now, the moon has much less power than the sun. I don't remember well off the top of my head, but I think averaged over the month (it might be on the full moon) we receive about 1/1000 the irradiance (W) from the moon as we do from the sun. The lunar disk is also substantially larger than the solar disk, so our $\theta_{in}$ is larger than that of the sun as well. I think what Randall was trying to say was that because of the relatively large angular spread of light reflected by the moon and the relatively low power density of the reflected light it cannot be concentrated sufficiently to heat paper to its ignition temperature. Randall can't make his $A_{out}$ small enough because $\theta_{out}$ hits 90$^\circ$ and then can't increase futher.

You can read more about this in the maximum concentration section of the etendue page on Wikipedia.

I know it's frustrating because it's nonintuitive, but it really is true. You can read about etendue at wikipedia or your friendly neighborhood optics textbook. I recommend Smith's "Modern Optical Engineering" . Or you can settle for the 2nd Law of Thermodynamics (aka "TINSTAAFL"), as GLR wrote in that what-if.

It's a matter of surface brightness, and the fact that you cannot focus a non-point object onto a point image (as is also pointed out in the what-if).

Actually, this doesn't work for a fairly dumb reason- the expression Randall wrote isn't quite correct. He has taken a small-angle approximation (very reasonable for the original question involving light from the Moon). The true expression for etendue, for light emitted into a range of angles $\alpha$, is $G= S\sin{\alpha}$. I follow Randall in taking the 2D case, and therefore using an angle instead of a solid angle, and in addition ignoring possible changes in the index of refraction of the medium.

That might be all you need, but for the sake of completion one can use this expression to find that, for an emitting area $S_1$ and receiving area $S_2$,

First, let's apply this to the emitting object itself. For something like the sun (but in 2D) emitting in all directions, $\theta_1=\pi/2$ and the total etendue of the emitter is just $S_1$. Therefore,

This means that if you collect all of an emitter's light, you cannot focus it down to a smaller area than the emitter itself.

Capturing only a part of the sun's light (whether directly or via the Moon) is similar. $S_1$ is now the size of your lens*, and $\theta_1$ is the range of angles of the arriving light. Moving the lens away from the source reduces $\theta_1$ (as 1/distance in 2D), allowing you to make a smaller image, but since you are farther away the light that gets to you is less intense (also as 1/distance). These effects cancel so that you only, at most, match the intensity of the source.

edit: If you're paying attention, you'll see that this argument used etendue to explain why you can't use sunlight to make something hotter than the sun, but said nothing about the moon itself. This is because, simply put, Randall's explanation does not appear to be correct. There is some nice discussion at the xkcd forums, but the takeaway is that the amount of light transferred from the sun to the moon depends on the moon's reflectivity- if it were a perfect mirror (and even better, a parabolic mirror), it could certainly transfer enough light to the Earth to heat something up hotter than the Moon itself- but, again, not hotter than the Sun thanks to the above argument and/or thermodynamics.

Therefore, the maximum temperature achievable from real moonlight is not so easy to determine but is somewhere between the temperature of the Sun and the Moon, probably closer to the latter.

I thought the same thing at first (and even emailed Randall) but finally realized that the angle upon exiting the system played a role in how much energy gets absorbed by the stuff you're focusing on. If it enters a surface at an extreme angle, it's likely to exit the region we care about very quickly, before impacting anything.

I think it works in the other direction too; that higher temperature sources are required to produce light that's less spread out. So even if you could somehow get all of the light coming from the moon lined up nice and parallel for free, so that when it passed through your giant lens it came out the other side with a lower etendue (and thus higher ability to hit stuff in the desired region) you still wouldn't have found a way to make a spot on the earth hotter than the surface of the moon -- you'd simply have raised the effective temperature of the moon. AND built an awesome giant moon-laser.

Randall is using conservation of etendue wrong. Higher temperature sources radiate light with lower etendue. Lower etendue light is better absorbed by targets. Conservation of etendue is what enforces the second law, in this situation. His explanation seems to assume that the energy transferred only depends on the number of photons reaching the target area (and so his appeal to a dubious "aim them at a faraway spot.") But it also depends on etendue. The photons exiting the system in his diagram are already more likely to be reflected or scattered, no matter how close you place your target.

Not the answer you're looking for? Browse other questions tagged thermodynamics optics or ask your own question.

9
Conservation of energy when focusing black body radiation on another black body
4
Does putting an aperture in a laser beam make the smallest point it can be focused to larger or smaller?
2
Laser beam focus
3
Is refraction of light a thermodynamic process?
1
Angular magnification (definition)

7
Converting between brilliance, intensity, and flux
7
Fairly Broad Spectrum Light Source Options
2
How does light get into a stable optical cavity in the first place?
35
How well can a laser be focused over interstellar range?
1
Why does collimated light form an airy disk pattern on a camera sensor?
2
Why does focus change when object is behind a glass slide?