Just wondering what the evidence is for fractionally charged quarks, is it simply enough to say that as we see deep inelastic scattering of electrons (at high energies) off the nucleus of an atom (protons and neutrons) we must assume that there are three constituent components of protons/neutrons and must therefore be fractionally charged?

Is it just that because we see three constituent flavours of quark (and then assuming they are integer charge like the electron) that we couldn't add up three combinations to equal that of the neutron (i.e., 0). If it were integer spin we would always see +1 and -1 hadrons made from three quarks?

The quarks have fractional charge not only because of fitting proton and neutron constituents. There is a huge data base of hadronic resonances that gave rise to to the quark model , the standard SU(3)xSU(2)x(U(1) of particle physics.

The quantum numbers assigned to the quarks are important, among them the 1/3 and 2/3 charge and the color assignements. The representations of the resonances would not fit the model with different charges.

An example of the symmetries that led to the quark model" 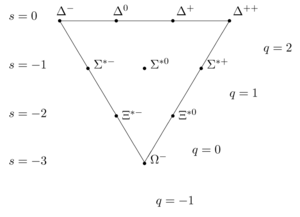 The Omega minus was one of the first predictions of the quark model, before it was found in Brookhaven bubble chamber data.

Why is the above decouplet structure ( and all the other representations in the link ) "evidence" for the fractional charge of quarks?

These structures are described by a group called SU(3) . This has a rigid representational structure, more complicated than a crystal which has simple symmetries. The fact that all the known hadronic resonances have a niche in one of these representations, allows to identify the constituents of the hadrons with the basic unit vectors of the SU(3) symmetry, as three "quarks".

The resonances in their niches have charges. In order for the charges to be consistent the quarks have to be identified with fractional charge , to add up to 1 and -1 and 0 ( integer numbers), and in addition, the complexity of the representations (each niche is accompanied by group constants) imposes the fractions to be either +/- 1/3 or +/-2/3 in order to fit the resonances in the appropriate niches with the correct charge. Otherwise the symmetry would break, the puzzle pieces would not fit.

The fact that the Omega minus was predicted and then was discovered, clinched the model, although the beautiful symmetries had already convinced most physicists at the time.

1) The spin of the proton and neutron is 1/2. The deep inelastic scattering (DIS) experiments in the seventies (and later) showed that the proton (neutron) is made of charged subparticles being also fermions, the quarks. The rule of the addition of angular momentum thus constrains the number of quarks (talking only about valence quarks) in the proton and the neutron to be an odd number. 1 is excluded since the proton/neutron would be elementary. The next one is 3.

2) Now the charge of the proton is 1 while the one of the neutron is 0. Isospin symmetry conservation in strong interaction (verified experimentally much before the 70s) suggested that neutron and proton must be made of the same kind of quarks. The charge constraint imposes at minima 2 kinds of quarks, that we call now u and d with respectively the charge 2/3 and -1/3.

Not the answer you're looking for? Browse other questions tagged particle-physics charge quarks or ask your own question.

20
Why do quarks have a fractional charge?
15
How has quark electric charge been directly measured?

4
What is mass of free up and down Quark?
2
Evidence for standard model description of neutrons
0
A few questions on quarks, gluons and the strong force
4
What's the difference between Quark Colors and Quark Flavours?
5
What keeps quarks separate (strong force pulls, but what repels to equal out)
2
Deep inelastic scattering
1
Can photons scattering off quarks produce resonant states?