In system's similar to a motor, where the armature begins to accelerate simultaneously there is induced $-\epsilon$ to reduce the applied current(hence the applied power $P(t)$ is also reduced), or others similar to that principle such as a rail gun, Lenz's law would state the conservation of energy in Faraday's law of induction, however, how does Poyntings theorm relate to such systems? To add to the conservation of energy?

In terms of units, a flux is just a density multiplied by a velocity. In simple (loose/careless) terms, the velocity gives the direction and rate while the density supplies the volume and number.

Poynting's theorem is, in short, a statement of the conservation of electromagnetic energy.

To add to the conservation of energy?

Poynting's theorem is part of the total conservation of energy of a given system. There are numerous ways to treat this and many can be too involved to go into here, but the simple answer is that it defines the conversion of particle energy to/from electromagnetic energy. For instance, one can use Poynting's theorem with the generalized Ohm's law [e.g., see page 572 in Jackson [1999]] when describing the transport properties (e.g., conductivity) of a given system.

So in a sense, yes, Poynting's theorem adds to the conservation of energy in that it is one part of that law.

A. I already converted the expression for current density to a macroscopic form. To see more details on the difference between micro- and macroscopic Maxwell's equations, see pages 248-258 in Jackson [1999].
B. Note that I have included heat (i.e., random kinetic energy) and bulk flow kinetic energy in my use of the term mechanical energy here.

I have had an idea but I do not know whether or not my analysis is flawed?

Rather than starting by looking at a motor I want to start with a consideration of a generator. 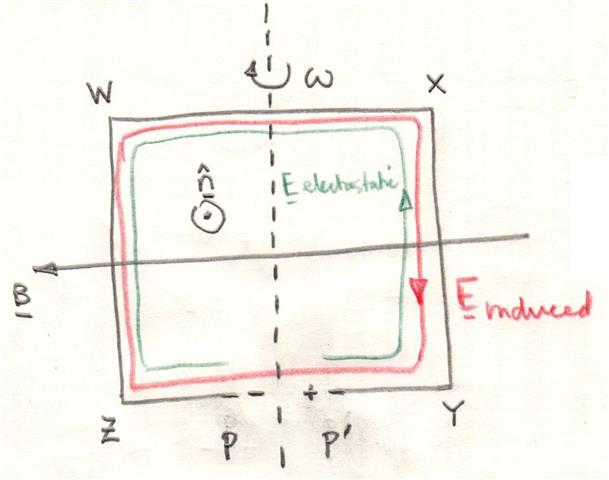 The induced E-field moves charges in the wire which then produces an equal magnitude but opposite in direction electrostatic E-field in the coil.
Once the electrostatic E-field has been set up no current flows in the circuit and as there is no B-field resulting in the Poynting vector $\vec S$ being zero.

The electrostatic E-field has been introduced because it is a conservative field and so it can be used when applying Kirchhoff’s voltage law $\int_S \vec E \cdot d\vec s =0$.

Introducing a resistor across the gap means that a current $I$ will flow in the coil and a B-field is produced.
Note that in the diagram above this would mean that the induced current in the circuit will be in a clockwise direction.
That induced current will be producing a magnetic field inside the coil into the screen thus trying to reduce the increasing magnetic flux which is producing it – Lenz’s law.

Consider the resistor as a cylinder.

Since $2 \pi r L$ is the surface area of the resistor through which the energy is entering, the energy per second is $V_RI$ - as expected.

It is the next bit that I am not sure about and would value some comments about it.

For the electrostatic E-field and the associated B-field in the coil the Poynting vector points outwards.
Is this this the energy flowing out of the coil which then enters the resistor.

Does the inward pointing Poynting vector associated with the induced E-field represent the flow of energy into the coil coming from the work done by the external forces making the coil rotate?

If what I have written above is correct then introducing a voltage source, with its positive terminal on the right hand side in the diagram above, in series with the resistor and the coil can result in one of three things happening.

The first is that current in the circuit carries on flowing in the same direction.
The analysis of the voltage source will be exactly the same as that for the resistor with the Poynting vector pointing inwards showing a power of $V_s I$ into the voltage source.

Which can be interpreted as the power input to the generator $V_B I$ equals the power dissipated in the resistor and the voltage source.

The second possibility is that $V_S$ is such a value that no current flows in the circuit.

The last situation is when the voltage source $V_S$ is large enough to produce an E-field in the circuit external to it which is large to drive the current in the opposite direction.
One has gone from a generator to a motor and $V_B$ is sometimes called the back emf.

The power output from the voltage source equals the mechanical work done per second by the motor plus the power dissipated in the resistor.

Not the answer you're looking for? Browse other questions tagged electromagnetism energy-conservation classical-electrodynamics or ask your own question.

3
Is there any electric current in a continuous medium of moving charges?
1
Ohmic heating in a fusion plasma
2
Describing travelling waves carrying energy from one point to another
1
Please help me understand the intuition behind Poynting's Theorem
1
Plane waves in plasmas
1
Force on fields and definition of magnetic energy

4
Self induction: Why is induced voltage smaller than the applied voltage?
13
Faraday's law - does the induced current's magnetic field affect the change in flux?
1
How eddy current brakes function
3
Eddy currents Vs. Inducing EMF in opposing the change?
2
Why is there a phase difference of 90° in between current and voltage through a capacitor?
0
If a current loop falls through a uniform magnetic field - is there a voltage induced?
2
Explanation of Lenz's Law phenomena
1
Lenz's law and the motor effect
6
How is it possible for the induced emf to take negative values in Faraday's Law of induction?