What makes the difference between ionic and covalent bonds?

Backstory: When I learned about chemical reactions, there were two types of molecular bonds: Ionic, where an atom or compound molecule with a low valence number loses those valence electron(s) to one or more other compounds with a high valence number, which it then bonds with; and Covalent, where valence electrons are "shared" between two or more atoms that don't want to actually "give up" their electrons to the other atom.

At first, that worked. But then, as I casually poked around Wikipedia and other sites looking to further my knowledge, I found evidence refuting this clear division. For instance, the explanation of pH on Wikipedia states that pure liquid water, a substance which is a textbook example of covalent atomic bonds, isn't actually covalent, but an equal mixture of hydronium (H3O+) and hydroxide (OH-) ions. The explanation is that liquid water, as a polar solvent, actually dissolves itself, and hydrogen ions (naked protons) travel relatively freely among atoms of water in its liquid and even gaseous states, forming hydronium where the hydrogen atom is gained, and hydroxide where it's lost.

Another example; benzene. It's composed of 6 carbons and 6 hydrogens. Carbon wants to get four electrons to fill its outer valence shell. The hydrogen fills one, ostensibly by sharing. It gets the other three by sharing electrons with its two neighbors. Now, three electrons don't divide by two; classically, we're taught that the double and single bonds alternate, but really, the behavior of this construct indicates that the last valence electron of each carbon atom is itself shared between its two neighbors, giving each carbon "one and a half" bonds with either of its neighbors. That sounds like "sharing", but not in the way normally described.

Now, there are other pretty concrete examples of covalence; diatomic gas molecules like O2 and N2 each have a mostly-full valence shell and just want a couple more valence electrons, and so in their diatomic bonds each atom "pulls" the other's valence electrons into its own valence shell without losing its own. But, "highly covalent" bonds like this seem to be more an exception to the rule than a rule unto itself.

So, maybe from a deeper level, I'm asking: where is the "dividing line" between bonds called "ionic" and bonds called "covalent"? Is there a primary property of the bond or the resulting substance that can be given as evidence to say definitively "this is a(n) ______ bond? Or is there indeed some "grey area" where the behavior of electrons between atoms could be described both ways at the same time?

The divide is actually not between covalent and ionic, but rather a spectrum between localised and delocalised electrons. The history of all this is actually quite fascinating, and Phil Anderson in his book "More and Different" has a nice chapter on this. Essentially, around the time that people started doing quantum mechanics on molecules seriously, there were two schools of thinking which dominated.

On one side was Mott and more popularly, Hund and Pauli who thought of electrons as primarily attached to atoms and through electromagnetic interactions their motions/orbitals would be deformed and one gets molecules. This is the version usually taught in chemistry classes as with a few rules of thumb it is possible to qualitatively account for a vast range of behaviours.

On the other side was Slater with a dream of a machine which could simply compute the electronic structure by giving it the atoms and electrons. In this picture, the electrons are primarily thought of as delocalised over all the atoms, and through a rigorous procedure of perturbation theory one adds the effect of interactions between electrons and may achieve arbitrarily good precision.

The latter has the problem that the results are not intuitive --- there are no rules of thumb available and one is reduced to simply computing. The problem with the former is that to achieve high accuracy, the "rules of thumb" become exceedingly complex and are not really very easy to use or to compute with --- it lacks the simple regularity of the Slater dream machine. It is telling that essentially the latter has won, and nowadays it is routine to compute the electronic structure of quite large molecules (~1000 atoms) through brute-force (the technique is known as density functional theory, and there are commercial software available to do it).

In finite molecules one can actually show that in principle both approaches will work --- technically we speak of there being an adiabatic connection between the localised and delocalised states. The only practical difference is just how hard it is to carry out the calculations. However, in infinite molecules (e.g. solid crystals) this is not true, and there can be a proper phase transition between the two starting points. In that case, the localised approach corresponds to what is fancily called these days "strongly correlated systems" such as Mott insulators and magnetically ordered materials, and the delocalised approach are essentially metals (technical language: renormalises to be a Fermi liquid).

Nowadays there is a desire (from theoretical condensed matter physicists) to develop the localised approach again, as it may be possible to find some useful rules of thumb regarding magnetic materials, a prominent example of which are the high temperature superconductors.

Good question. Bonds are definitely a spectrum between covalent (where electrons are shared roughly equally) and ionic (where one species dominates control of the electrons). Sometimes the term 'polar covalent' is thrown in somewhere in-between. There is no clear dividing line, but general the quantity of interest is the polarity of the resulting molecule. Highly polar is characteristic of an ionic bond, while little (or no) polarity is characteristic of covalent bonds.

What determines the polarity is the difference in electronegativity between the atoms forming the bond.

See this webpage for lots of good information on the subject: http://www.chemistry.mcmaster.ca/esam/Chapter_7/section_1.html

For covalent bonds, we have something known as electronegativity. 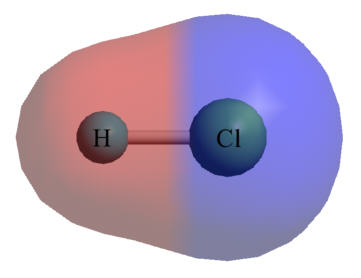 In this (pure gaseous) HCl molecule, there is an H-Cl covalent bond. Remember that a bond is basically a cloud of electrons. Now, Chlorine has a high electronegativity (read:affinity for electrons), and the shape of the electron cloud is distorted towards Chlorine. Thus, HCl, a covalent compound (in gaseous state), becomes a partially ionic compound. If you put it in water, intramolecular forces are large enough (and $\rm Cl^-$ is stable enough) that it breaks into ions.

So, asymmetric covalent bonds have a little bit of ionic nature. The electrons aren't perfectly shared, one of the molecules hogs them.

On the other hand, for predominanlty ionic compounds, we have something called polarization. In ionic crystal lattices, ideally, the positive and negative ions have nice round clouds. But, due to size/charge differences, these clouds may also be distorted, leading to a small overlap. Overlap=covalent bond, so we now have partial covalent character in an ionic bond.

You may have noticed that polarization and electronegativity are pretty much the same thing, just at opposite extremes.

OK, now a few things on your examples:

Benzene carbons don's share the electrons with just their nearby neighbors. All the $\pi$ electrons are shared. 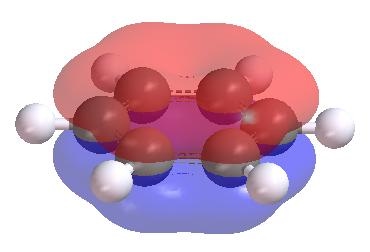 Here all the electrons of the double bonds (six of them) are dumped into the two-lobe cloud you see in the diagram. Electron clouds are quantum mechanical objects, and thus all they say is "there's xyz probability of finding an electron here". And the electron could be from any one of the carbons, IIRC there's no distinguishing feature (quantum number) that tells you which carbon these came from--there must be some other quantum numbers but I don't know--but they'll probably be random and not related to the carbon atom.

Not the answer you're looking for? Browse other questions tagged quantum-mechanics physical-chemistry or ask your own question.

3
Covalent bonds are EM (electrostatic/electronegativity) or not?

15
Why do covalent bonds form?
1
Ranking bond types from strongest to weakest
7
How does covalent bonding actually work?
9
What *really* happens to atoms in chemical reactions?
3
Covalent bonds are EM (electrostatic/electronegativity) or not?
0
Are individual atoms inside a molecule (covalent) still really EM neutral?
0
Is it the Coulomb force which acts between electron and protons creating chemical bonds?
1
Which atoms are orbited by shared electron?
1
Covalent bond between two hydrogen atoms with the same electron spin?
2
Nature of covalent bonds in higher dimensional physics?