How can a bowling ball curve in both directions?

There is a popular video on facebook that I just don't understand. A man spins a bowling ball very fast then slightly taps it down the lane. Somehow it does half of a figure eight, curving around two pins. Can anyone explain the physics behind it? Intuitively, if it is spinning one way, it can only curve one way.

Update: The answers have left me more confused b/c they disagree, so I assume the correct answer lies between both of them. B/c more work was given to draw up a diagram, I have given the bounty to him.

The phenomenon you see here is precession.

The bowling ball is acting like a gyroscope (spinning top). Its angular momentum vector is almost perfectly vertical, but not quite - this is giving rise to the "drift". However, there is a small amount of torque on the ball because it's not quite symmetrical. As Carl pointed you, this may be something that was deliberately introduced by the manufacturers; perhaps it was due to the friction between the ball and the lane; or maybe the presence of the holes on top (but not quite centered) may have been sufficient. We can't tell from the clip; but we can deduce that there is angular momentum, and precession - we conclude there is some source of torque.

A gyroscope with torque will precess - the axis of rotation will slowly move around. As the axis of rotation shifts, the point where the ball is touching the lane will have velocity in different directions, and thus produce a small net force first one way, then the other.

Modern high-end bowling balls are extremely non-homogeneous in construction. If you look around at vendor sites, you'll see that there's an off-center "dumbell" of different density from the body of the sphere. All sorts of eccentric motion can occur as a result.

There is one important point missing here on the given answers. The main point of the question actually. It's important that the ball hits to the second pin. This contact is the clue to change the direction of the bowling ball.

As it's stated in the question, there is no way to do an half-eight or S; You can have J-curve or C-curve, but S needs an external force, or it would be a violation against newtons laws. 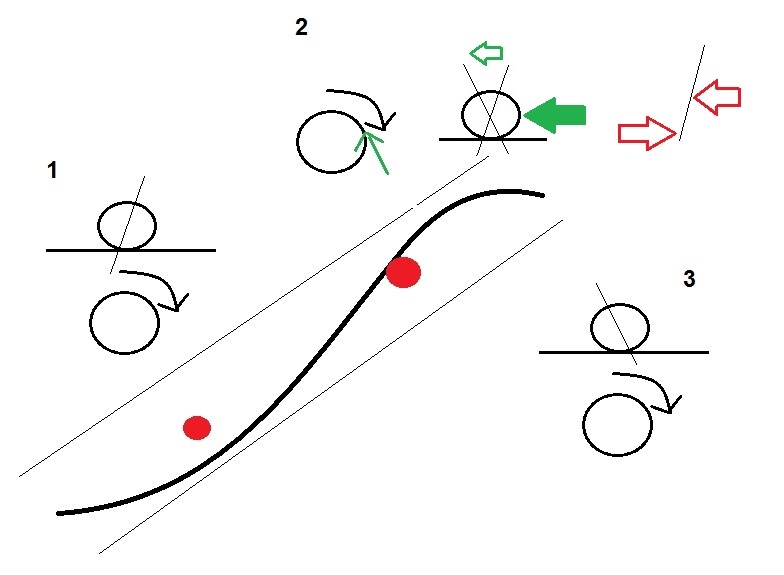 At the picture is shown how this goes.

Not the answer you're looking for? Browse other questions tagged forces angular-momentum moment or ask your own question.

3
How does the curve ball drag air around it?
4
Ten-ping bowling: Can a ping pong ball knock over a bowling pin?
0
Curve of a rod bent by force on both sides
0
To what amount can sidespin change the flight curve of a ball?
7
How different can the directions of angular momentum and angular velocity be?
0
Work and walking with a bowling ball
0
Acting forces on a curve ball (billiards)