Why does energy flow between a high voltage transmission line and linemen approaching it on a helicopter?

The video High power line workers shows linemen servicing a live high voltage transmission line. As the helicopter approaches the line, the lineman reaches out with a metallic wand that is conductively connected to the helicopter and a standing discharge appears between the line and the wand. 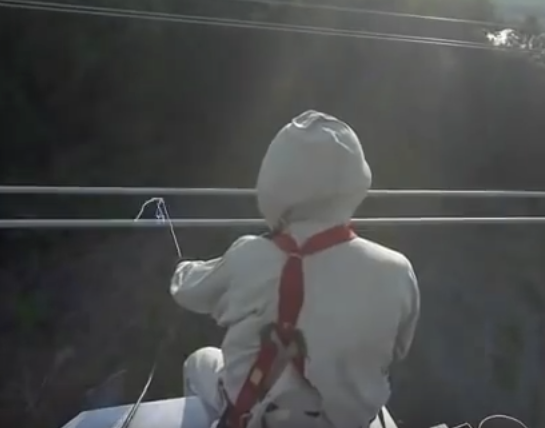 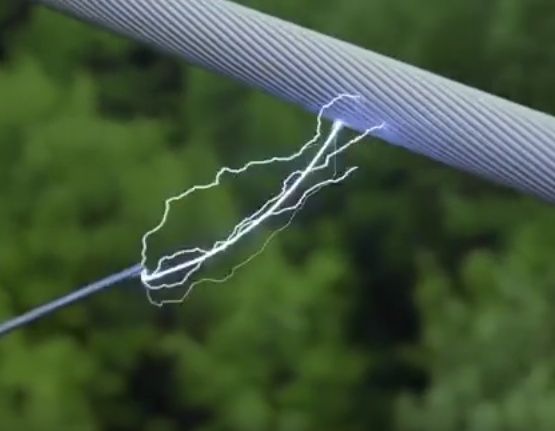 What is going on? A significant amount of energy appears to be flowing between the line and the helicopter, but a complete circuit does not exist because the two bodies are only connected by a single conductor. Some answers to related questions imply that a single conductor can't electrocute a person:

AC or DC, you only get electrocuted if current passes through your body... Touching just one wire at a time gives the current nowhere much to go. (Source)

You will not get a shock unless you complete the circuit to ground. This is why power lines can be worked on while live, from a helicopter. (Source)

However, the video makes it clear that a significant amount of energy is flowing. Another answer claims that a body (e.g. bird) approaching a high-voltage line would only experience a transient current:

[I]nitially there's a potential difference between the wire and the bird and there would be a (very short lived) transient current which is similar to electrostatic discharge you feel when you touch an object with electrostatic charge build-up. (Source)

But the discharge in the video appears to be sustained instead of short-lived. Another poster states that the discharge is deadly and the conductive wand is essential for the linemen's safety:

[T]he initial equalization process [between the helicopter and line] would kill [the linemen] if the arc went through [his] heart instead of the conducting [wand]. (Source)

Some answers speak of capacitance, high electric fields and corona discharge. How can one understand the flow of electromagnetic energy and charged particles between the two bodies as the helicopter approaches the line?

I understand that the question is very old but I think it is a really good question and deserves a clarification in the form of another answer.

There is another video that highlights the process better: https://www.youtube.com/watch?v=DPNK7bc2qvM

The sequence of events in the video is as follows:

So, what is going on is the following:

1 In the video the worker makes the utmost effort to keep the wand right on the powerline when he is connecting or disconnecting the clamp.

The helicopter and the power lines are at different potentials, the difference being so great as to cause the air in between to become a conductor. If you applied such a potential difference across a line worker it would probably result in death. You will note that the line worker is holding a metal stake which has a "pointed" end. This increases the induced E-field around the point and thus increases the chances of the air becoming a conductor around the pointed end.

You can think of the helicopter as a capacitor (a device which stores electric charge) whose capacitance is much greater than that of a bird and so it takes much more charge to make the voltage of the helicopter to rise than for the bird.

As the charge flows between the wand (connected to the helicopter by a conducting cable) and the power line the helicopter charges up so that its potential moves towards that of the power line. No significant charge through the line worked because it looks as though non-conducting gloves are worn. Whilst this is happening any sharp edges or points on the helicopter will possibly start making the air a conductor. Charge from the helicopter would be sprayed out from these edges and points and this is called corona or silent discharge. It is what you hear when you walk under a power line and it is what can produce interference on your car radio.

Not the answer you're looking for? Browse other questions tagged electromagnetism energy electricity electric-circuits or ask your own question.

14
Would you die if you put your hands on a powerline?
16
Why do birds sitting on electric wires not get shocked?
10
Why don't electric workers get electrocuted when only touching one wire?
0
What happens when a bird lands on a power line?
1
Why is the parachutist, in the enclosed image, not electrocuted?

1
Why does holding an electrical switch in between on and off states cause sparks?
1
How can current be a smooth curve?
0
What happens when a bird lands on a power line?
4
Why do high voltage transmission line workers need a Faraday cage suit?
4
Why don't you get electrocuted when you jump and touch an electric fence?
1
Difference between energy loss at high voltage and high current
3
What is "electric field causes current in a conductor (metal wire)" exactly?
0
Voltage and electric field between Live and Neutral conductors