Cause for spikes in Trinity nuclear bomb test

In Richard Rhodes' book, The Making of the Atomic Bomb, I was reading about the Trinity nuclear test. High speed photos were taken and this one is from <1ms after the detonation. The book mentions the irregular spikes at the bottom of the image, but does not explain them. Is there a specific reason or explanation for these odd spikes in the relatively spherical explosion? 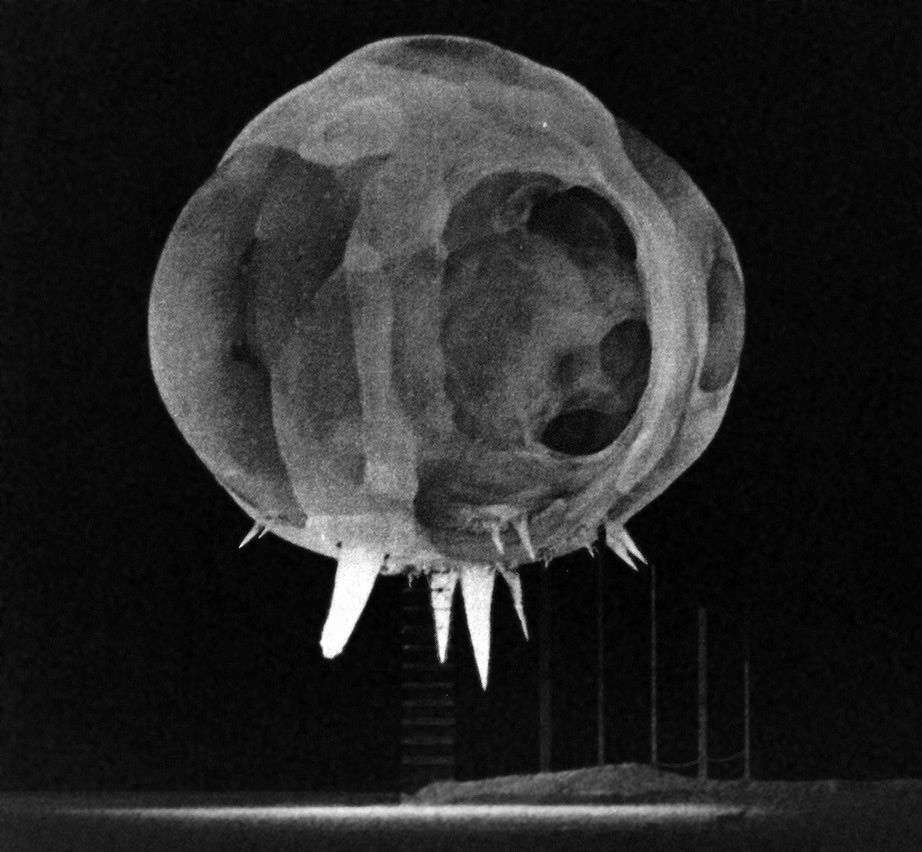 Nuclear explosion photographed less than one millisecond after detonation. From the Tumbler-Snapper test series in Nevada, 1952, showing fireball and "rope trick" effects. The fireball is about 20 meters in diameter in this shot

The answer is in wikipedia

The photograph on the right shows two unusual phenomena: bright spikes projecting from the bottom of the fireball, and the peculiar mottling of the expanding fireball surface.

The surface of the fireball, with a temperature over 20,000 kelvin, emits huge amounts of visible light radiation (more than 100 times the intensity at the sun's surface). Anything solid in the area absorbs the light and rapidly heats. The "rope tricks" which protrude from the bottom of the fireball are caused by the heating, rapid vaporization and then expansion of mooring cables (or specialized rope trick test cables) which extend from the shot cab (the housing at the top of the tower that contains the explosive device) to the ground. Malik observed that when the rope was painted black, spike formation was enhanced, and if it were painted with reflective paint or wrapped in aluminium foil, no spikes were observed – thus confirming the hypothesis that it is heating and vaporization of the rope, induced by exposure to high-intensity visible light radiation, which causes the effect. Because of the lack of mooring ropes, no "rope trick" effects were observed in surface-detonation tests, free-flying weapons tests, or underground tests.

There are three asymmetries that I can think of in the system that could explain the asymmetry in the evolution of the system.

First, gravity pulls down, and not in other directions. However, I'd estimate that gravity is much too weak in comparison to other forces in this system to have such a dramatic effect in so short a time, so I doubt that's the reason.

The other asymmetry that I noticed is that the shot tower is below the detonation, but not on any other sides. This seems like a plausible cause to me. The metal from the shot tower, being significantly different from the air on all other sides, may have reacted to the explosion in a very different way. Perhaps metal fragments, having significantly greater inertia than air molecules, penetrated the surrounding still air faster; the cones could be incandescent air left in the wake of those fragments.

Thirdly, it could be due to asymmetry in the construction of the bomb itself - it's hard to evaluate the likelihood of that possibility without more research.

This is based solely on some basic reasoning, though - I look forward to being proven wrong by someone with more sophisticated understanding of nuclear weapons.

$^†$ (except in some special circumstances when symmetry can be broken "spontaneously")

Not the answer you're looking for? Browse other questions tagged experimental-physics nuclear-physics atmospheric-science nuclear-engineering explosions or ask your own question.

6
What causes the structure visible in first few milliseconds of a nuclear explosion?
2
Vertical filaments during Atomic bomb explosion

13
What are the white lines in some nuclear bomb test photos?
6
What causes the structure visible in first few milliseconds of a nuclear explosion?
3
What's the largest mushroom cloud possible from a coffee cup/grenade sized nuclear bomb?
3
From which height the effect of nuclear bomb will be Greater?
4
Estimate post-shock temperature of nuclear explosion
0
Can an atomic bomb/rocket with nuclear warhead's nuclear explosion be triggered by a conventional explosion close to it?
2
Distinguishing an underground Hydrogen bomb test from a fission bomb explosion