Why is a stellarator-type nuclear fusion reactor so oddly-shaped?

My first impression: It's a mess.

Why is it shaped like that? I can't find any info about its shape other than it's a special arrangement of magnetic coils.

Suppose you start with a linear solenoid. Due to the Lorentz force charge particles travel in circles (or helices) inside the solenoid so they can't reach the walls of the solenoid. But obviously the trouble is that they will leak out of the ends.

Now we curve the solenoid round and join its ends together to make a torus so now the particles can't leak out of the ends. The trouble is that by bending the originally straight solenoid we have made the spacing between the turns of wire smaller on the inside that on the outside, and as a result the magnetic field inside the solenoid is higher on the inside than on the outside. This means the charged particles will no longer move in circles but will instead spiral towards the outside wall until they hit it.

If you look at the picture of a stellarator from Wikipedia: 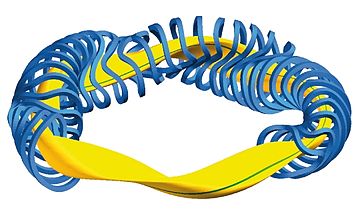 you can see how each coil is rotated slightly compared to the ones immediately before and after it.

This sounds a nice simple idea, but containing plasma makes herding cats seem easy because the plasma generates its own fields as it flows and these interact with the stellarator fields in complicated and non-linear ways. To make the idea work in practice requires a design with the fearsome complexity shown in your picture.

Not the answer you're looking for? Browse other questions tagged electromagnetism nuclear-physics plasma-physics fusion or ask your own question.

18
Why all the orifices, protuberances, hinged/bolted panels, etc. on a stellarator?

6
Help fill in my understanding of the Polywell fusion reactor
38
Why are pear-shaped nuclei possible?
9
Nuclear fusion scaling with reactor size
1
Using ion beam to create strong magnetic field
3
Is a dipole fusion reactor feasible?
3
Electronically controlled fusion reactor
0
Why does fusion above nickel 56 require energy?
0
Has proton-proton fusion ever been seriously considered for an artificial fusion reactor?
2
Is high temperature **required** for nuclear fusion?