Why is reflected light polarised?

Why is reflected light polarised?

I have learnt about Brewster's angle, and how at a particular angle all light reflected is polarised, but do not understand why. Is this something that could be explained to a guy that doesn't have a Ph.D in physics?

The following diagram may be helpful: 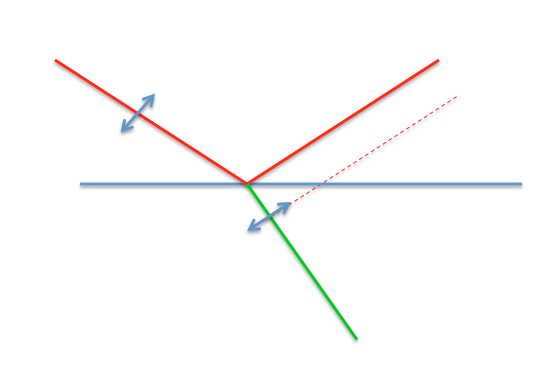 If you have an incident ray that is polarized with the E field up and down (in the plane containing the incident ray and the normal to the surface), then when that ray is refracted, it contains a component of electric field that is perpendicular to the refracted ray (and still in the same plane).

The reflection is actually caused by the motion of electrons in the medium. Now you can see that the electrons, which move along the direction of the E vector, are moving parallel to the direction of the reflected beam. An electrical dipole that is oscillating can send a wave in all directions - except the direction it is pointing (if you think about it, looking at the dipole "end-on" you don't see it moving: if it doesn't seem to be moving, it shouldn't be seen to be radiating towards you...). This entire analysis is only for the E field with the polarization drawn: if the incident light contains a component of E field perpendicular to the sketch (in and out of the page), that component will be able to radiate along the reflected direction from inside the dielectric.

Answer to second part of question:

Is this something that could be explained to a guy doesn't have a Ph.D in physics?

Yes, it can be explained. I study in same class as you. I understood it in my third attempt. 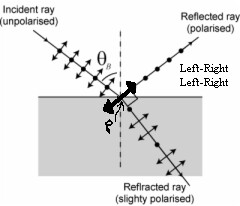 You can imagine when particle vibrate along LR , it emits light in all directions except along LR. So, there is no component of light along LR. So, in reflected light no LR component is present. 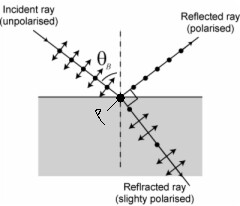 Consider medium particle at P moving Up down Up down (out of plane of screen) It emits light in all directions, except at U D. So, Reflected light has component along plane of light.

But using Huygens principle, you see light can actually move in two ways. It can either reflect back at $\theta$ angle or refract to medium.

So, From combined effect of two, It can hence be said reflected light is polarized, as it has only U D component.

Not the answer you're looking for? Browse other questions tagged visible-light reflection polarization or ask your own question.

4
Polarization of light upon reflection
2
Why the reflection of randomly-polarized light is not random?
1
How are the magnetic field lines in a electric dipole formed (step by step and graphically)?

8
Polarization and mirrors
1
Reflection of a polarised beam
1
Optics Brewster's Angle Reflection Intensity
0
Polarized light from any surface?
1
Brewster's Angle
2
Why is polarised light so bright? if polarizing lens are made to dim the light
3
Polarization and Brewster's angle
2
Brewster's angle reflected wave- is it part of the refracted or incident ray?
1
What happens to other states of polarized light than $s$ or $p$ when encountering a filter/surface?