Why does time always flow forward?

According to the BBC Earth " Physics says that any event in our day-to-day lives could happen in reverse, at any time".Then why can't we just turn time backwards? 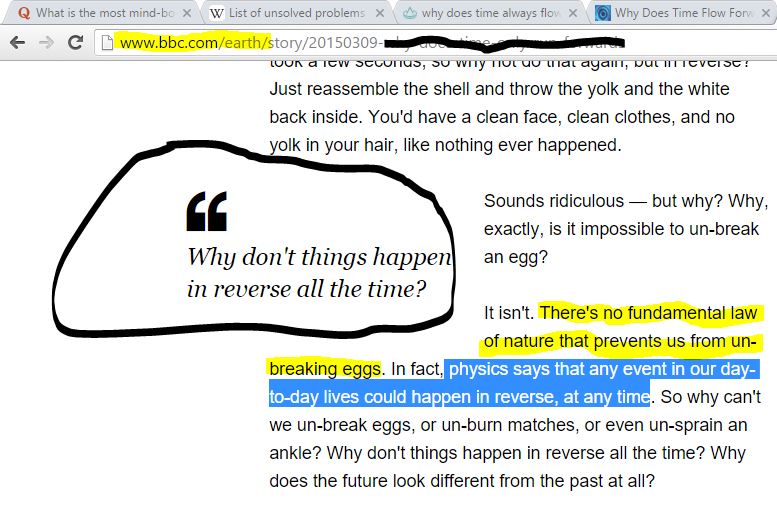 So far there is no definitive answer as to why time flows forward. While many scientists speculate what may the cause of this asymmetry in time none of the options has been accepted as the one answer. Often these ideas lack a complete understanding of the underlying more complex principles that we cannot yet understand but here is one of the most common theories:

Brian Greene discusses the "time vector" in his book, The Fabric of the Cosmos, which makes for a great read if you have these kinds of questions.

The big bang theory predicts that there will be an arrow of time and a lot of scientists agree that the universe started from a big bang. One attempted more complete explanation I saw before was that the big bang created a tendency for entropy to increase. I think that explanation is not correct because according to Bubble's answer to The statistical nature of the 2nd Law of Thermodynamics, the second law of thermodynamics hasn't been proven to be an absolute law.

Here's my theory on why there's an arrow of time. After the big bang started, following the time symmetrical fundamental laws created chaotic tendencies. Although time is continuous, we can still consider only times that are a multiple of a certain very short time unit after the big bang and explain the state of the universe at each one of them in terms of the state at the previous one of them. Let's consider a solid with an uneven distribution of heat at a certain time. The big bang set it into a time asymmetric state where heat diffuses randomly going to the next state but not going to the previous state. That state also leads the state at the next time to be time asymmetric where heat has a tendency to diffuse randomly going to the state after it but not going to the state before it.

Not the answer you're looking for? Browse other questions tagged thermodynamics time-reversal-symmetry arrow-of-time or ask your own question.

15
The statistical nature of the 2nd Law of Thermodynamics

2
Time Reversal Invariance in Quantum Mechanics
0
On the distinction of past and future: could one theoretically reverse direction of particles and cause time to appear to go backwards?
31
In reverse time, do objects at rest fall upwards?
5
Is black hole formation reversible if physics law holds even in time reverse?
0
How would certain situations hold up in time-reversal symmetry
62
Have researchers managed to “reverse time”? If so, what does that mean for physics?