How does the Physics work for the Quantum Suicide thought experiment?

On page 5 of this paper written by Max Tegmark, Tegmark discusses a thought experiment called 'Quantum Suicide'. As far as I understand it, this experiment was created to show the experimental difference between the Copenhagen interpretation and the Many Worlds Interpretation of Quantum Mechanics. 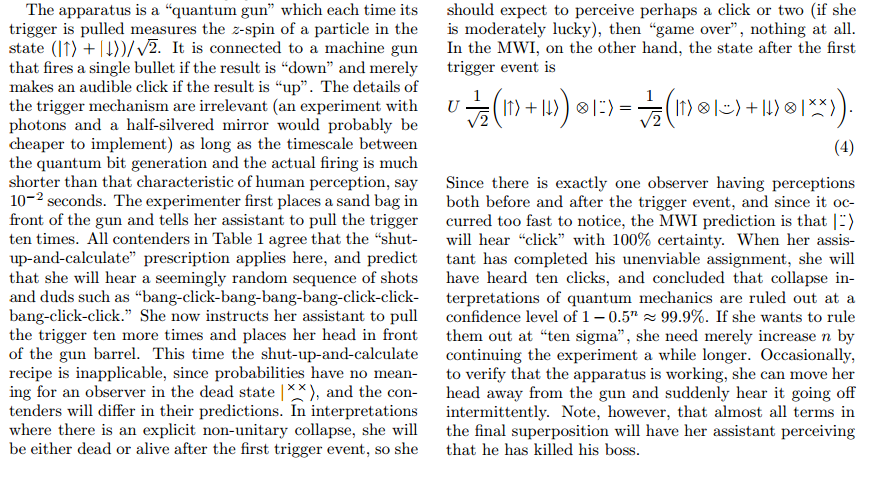 I'm really not sure how the physics works out here. As far as I understand it, the Copenhagen Interpretation assures us that after each measurement, the wave-function collapses for the particle, and asserts that the experimenter will either be dead or alive after each measurement. So the experimenter, as long as she isn't incredibly lucky, should be dead within a couple of measurements. This all works out in my head very nicely, and makes a lot of sense. However, somehow when we are dealing with the Many Worlds Interpretation, "the observer will hear click with 100% certainty". Somehow, the experimenter is guaranteed to survive. At first, I thought this concept is just a parallel of the Anthropic Principle, but on further consideration that doesn't seem to be the case. The Wikipedia Article for this thought experiment states:

However, if the many-worlds interpretation is true, a superposition of the live experimenter necessarily exists, regardless of how many iterations or how improbable the outcome. Barring life after death, it is not possible for the experimenter to experience having been killed, thus the only possible experience is one of having survived every iteration.

Sure, there is a possibility that the experimenter survives. But isn't that the same with the Copenhagen interpretation? Basically, I am very confused, and any help to understand this thought experiment, and its implications (or the maths, because I don't understand equation 4), would be great.

The Copenhagen and MW are both "interpretations" in that they cannot be experimentally distinguished objectively in practice. However, if there was any proof that the MWI was correct then the Copenhagen explanation would be wrong. We would be talking about radically different theories.

Quantum Suicide is a subjective verification and only works if the Copenhagen interpretation is false. So we are back to having no objective experimental differentiation.

In Copenhagen interpretation, there is a possibility that experimenter survive, but it becomes very low if the experiment goes on. Of course it can still happen and in that case the experimenter will say, of course I'm alive because otherwise I can't make any statement. But that's very unlikely.

In MWI, there is a certainty, each time the trigger is pulled, that both outcomes occur. So even if the experiment goes on say 30 times, we know that "somewhere" in the wave-function, there is a surviving experimenter.

For the experimenter, after trigger has been pulled 30 times, either he is a very lucky guy surviving odds of 1 over one billion, either MWI is the right one. Which one is the more likely ?

Sure, there is a possibility that the experimenter survives. But isn't that the same with the Copenhagen interpretation?

Yes, but that's not the point. The point is that in the MWI every experimentalist, who submits themselves to this experiment, will have a probability of 100% of finding themselves alive. This is so because all living experimentalists will have a subjective continuous experience of hearing only clicks, no matter how long they wait. So they must conclude that the MWI interpretation is right.

This is in sharp contrast with the experimentalists in the Copenhagen interpretation, in which the probability for any one of them to find themselves alive after the same long while is practically 0%.

any help to understand ... the maths, because I don't understand equation 4

In equation 4, the states in both worlds, after the trigger, are written down and separated by $+$ signs.

The right part of equation 4 describes world 1, in which the quantum state is $\vert\uparrow\rangle$ with an alive experimentalist and, after the $+$ sign, the world 2 situation with a dead experimentalist.

Not the answer you're looking for? Browse other questions tagged quantum-mechanics quantum-interpretations thought-experiment or ask your own question.

5
Many world interpretation on test