When I opened the tap, water flowing out from the openening became thinner as it flowed down. The same thing also happened when weather came out of a bottle. What is the reason for this?

Is it because the velocity of water increases as it flows down which results in a decrease in cross sectional area?

Is it because the velocity of water increases as it flows down which results in a decrease in cross sectional area?

I believe you're right. We can also add that in the usual case of flow conservation, that water flow is constrained to "stick in one piece" by the tube inside of which it is flowing. In the case of the tap, the water flow binds together because of surface tension forces. But when the flow becomes to thin, an instability occurs as you can see it loses its circular shape.

Yes, you are right. The conservation of mass (for incompressible fluids, as water is) states that

where $A$ is the area of the stream and $V$ the velocity of the fluid. Hence, as water accelerates due to gravity, $V_2>V_1$, so 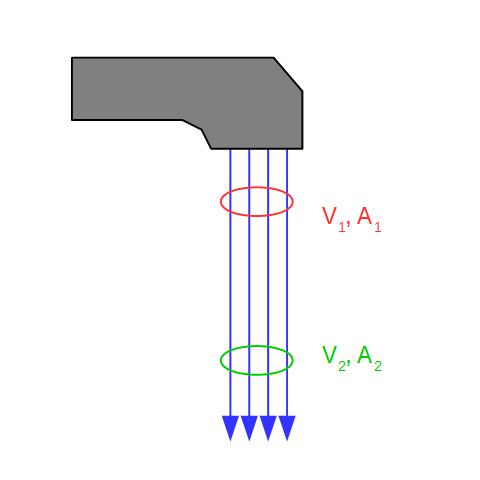 There are two reasons for this, as follows.

First, surface tension tends to pull the jet of water together as it falls down, reducing its cross-section.

Second, the center of the jet is initially moving faster than the outer skin of the jet, and the flow is laminar. This also tends to urge the jet together rather than allowing it to spread out.

Note that this is true only for the case of a small jet that is moving relatively slowly, so that any aerodynamic effects are negligible.

Note also that once the jet has narrowed significantly, it becomes susceptible to a condition known as rayleigh instability, in which a tiny perturbation will cause the jet to separate into individual sphere-shaped droplets with a characteristic spacing or "frequency".

15
Are there any liquids with zero surface tension?
5
How does the cross section of a stream of falling water decrease

44
Mechanics around a rail tank wagon
2
What is the velocity area method for estimating the flow of water?
0
What is the aperture in the hydraulic analogy of Ohm's law
12
Differences in the behaviour of pinching a garden hose and closing a tap
5
How does the cross section of a stream of falling water decrease
2
Does eq. of continuity hold in vacuum too?
2
How could water pour out from upside-down bottle, unless its pressure is smaller than atmosphere pressure?
66
Why does water falling slowly from a tap bend inwards?
1
Due to incompressibility of water same volume of water should flow through pipe of different cross section . is that really true