Why do we travel in a circle along the Earth?

I know that in order to travel in a circle I have to have a net centripetal force $F=mv^2/r$. I also know that my normal force and gravitational force cancel. How, then, am I traveling in a circle around the Earth as it spins?

In elementary physics problems we often ignore the rotation of the Earth to simplify the problem, since it is generally a very small contribution; we therefore conclude that $F_g = F_N$ for an object on a horizontal surface.

Here's the formal answer to your question. We can set up Newton's 2nd law like so:

We know from geometry that centripetal acceleration is given by $a = v^2 / r$, and it's pointing inward, which we'll call the "negative" direction, so

I've formatted the last equation to show that the force of gravity is opposite in direction and stronger than the normal force by an amount $m v^2 / r$.

Note: the actual centripetal force on the surface of the Earth actually varies in direction relative to the force of gravity as you move away from the equator. The angle of the ground with respect to gravity also changes, since the Earth is closer to a geoid than a sphere. The general situation at any latitude requires friction to resolve, as well as treating the forces as vectors, since they aren't collinear, but the general principle that the force of gravity is stronger than the normal force, and that extra force provides the centripetal acceleration that maintains our circular motion, is still valid.

I also know that my normal force and gravitational force cancel.

But not exactly and that little bit of force produces your centripetal acceleration. It is one of the reasons that your weight as measure at the North Pole is greater than your weight when measured at the equator. 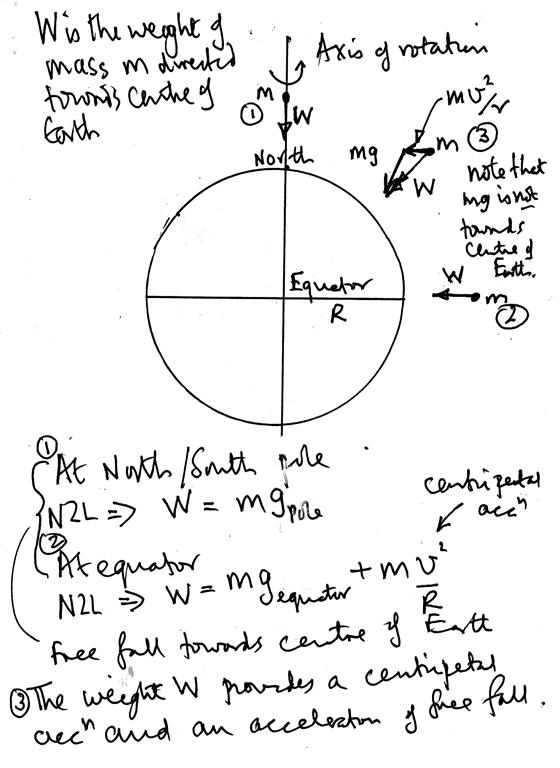 First of all, if you are at either pole, you are not traveling in a circle. Any place else, you would be traveling in a circle, with the largest being at the equator.
For you to understand what is happening, I will use two cases:
1 - No spin generated force.
When you are at a pole, you don't "fly out" into space, nor do you sink into the ground, therefore, the force of gravity on you (mg), is balanced by the force exerted on you by the ground(Fn). $mg = F_g = Fn$.
2 - Spin generated force.
When you are at the equator, there is a tangential velocity that creates a centripetal force, but since you stay in place, then the force of gravity must equal the ground (normal) force + the centripetal force $mg = F_g = Fn +\frac{mv^2}{r}$

20
Why is Earth's gravity stronger at the poles?

1
Normal force of loop-the-loop at the side of the circle
0
Is this the correct way to think about why static friction is directed radially during a turn on a level surface?
2
Why is normal force not the same as newtons third law
0
What force caused the Earth to have a tangential velocity to its circular motion around the Sun?
1
In A Banked Turn, How Much Of A Part Does Gravity Play As Compared To The Normal Force?
1
Help Understanding this Free Body Diagram (Eotvos Experiment)
0
Why does normal force exist on an object traveling at the sides of a vertical circle?
0
How come I can spin an object attached to a string as centripetal motion without slanting?
0
Net force affecting a simple pendulum
0
For a skater skating down a quarter circle, how to calculate the normal force from the ramp on the skater as a function of time?