What is the difference between these two springs?

I know that the stifness of the following springs are different. 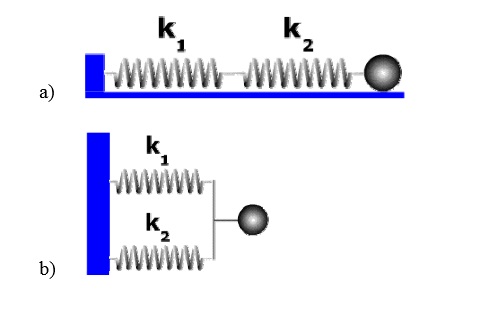 But how to find their spring constant?

Then finding the spring constant should be easy. My problem is finding which paradigm to apply...

For the b) case it is even simpler: you should notice that elongation of two springs should be equal. Thus, you have a different condition $\Delta x_{k1}=\Delta x_{k2}$.

Now it is straightforward to find both spring constants using $F=k\Delta x$ law.

Since the springs are connected in series, they will experience an equal amount of force as the tension is same inside both the springs in equilibrium. If the tension is non-zero, then some part of spring will accelerate and therefore equilibrium will be destroyed. In case of parallel springs, the force exerted by them will be the sum of the two forces as can be seen easily by making a free body diagram.

The answer is the opposite of what you would have if the springs were resistors.

Not the answer you're looking for? Browse other questions tagged homework-and-exercises newtonian-mechanics spring or ask your own question.