This is a problem that I have been unable to solve for some time.

Imaging a T-shaped stick, as shown in below image, which do not deform in any appreciable way and has pivot point at the tail of the "T". 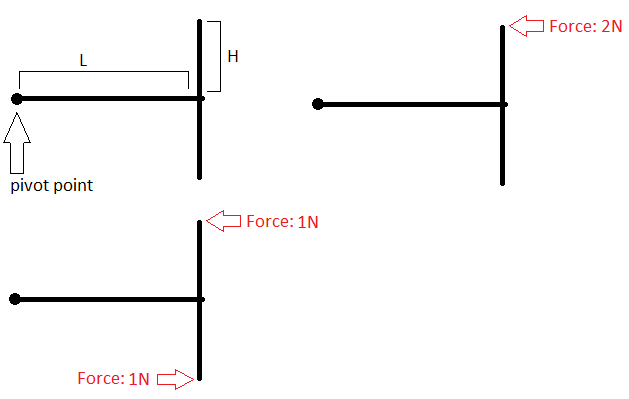 There are two questions in my problem, the first is: given that the "T" is symmetrical, how would applying two units of force on one of the "T"'s horizontal appendage differ from two one unit of force applied on both appendages in opposite direction, in terms of the torque received at the pivot? (See image)

The second question is: how would the situation differ if the "T" is "italicized", but the forces are exerted perpendicular to the appendages? see image: 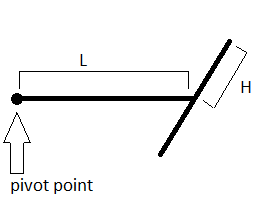 What is a systematic way to explain and describe the torque received at the pivot in terms of the lengths L and H and possibly the angles between them?

All you need to do is sum up the torques at the pivot for the different situations in order to understand how this mechanism will move.

If you have two equal and opposite forces $F$ the net torque applied is going to be $F\,d$ where $d$ is the perpendicular distance between them. Care must be taken to consider if this torque is positive (counter-clock-wise) or negative (clock-wise).

The torque is done with a cross product and thus is going to be:$$\tau = |\vec F| |\vec r| \sin\theta$$where $\theta$ is the angle between the position vector $\vec r$ (which points from the pivot to the place where the force is applied) and $\vec F$ (which points however the force points).

You can also express this as $x F_y - y F_x$ and since your forces point in the $x$-direction, the only term is $-y F_x$. The following effects hold:

0
Question about torque reaction of a helicopter
0
Angular equilibrium on a see-saw
0
Finding the force exerted by a mass at different contact points
4
Gyroscopic Force/Torque of a Constrained Wheel
0
Torque of a rigid body as point mass or charge torque
0
Nutcracker in space, torque provided by thruster vs by reaction force
0
Torque and angular acceleration , moments , counterweight
0
Equilibrium of a body in torque problem
3
For weighted pull ups, how does positioning the weight below the hips (eg a dip belt) make the motion harder than when placed on the back (eg a bag)?)