What's the formula for the speed of an accelerating car?

I am trying to find a formula that closely describes the speed of an accelerating car over time. I have found many graphs on the internet, but so far no formulae to generate them. For my purposes I will assume that the curve is continuous (i.e. no breaks or discontinuities for gear changes). 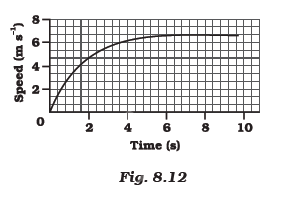 The example curve provided is not necessarily accurate, but it looks good. I want a formula that closely matches the acceleration of a real car. How can I calculate such a curve?

The equation for your curve is given by:

where $F(v)$ is the net force on the car, which is a function of the velocity. we solve the equation by integrating to get:

The trouble is that the net force $F(v)$ is a complicated function that doesn't generally have a simple analytic form. The main contributions to $F(v)$ are:

The point of all this is that there is no way to write down a simple equation for $v(t)$ as there are just too many variables that we don't know. When designing cars engineers experimentally measure all the different factors like drag and friction, and with these empirical figures they can do a good job of predicting the performance of the car. Since you don't have access to this data the best you can do is fit some form of curve. For example as a starting point you could assume the torque is constant and the aerodynamic drag is quadratic, in which case you'd get:

where the uppercase letters are all constants that you have to fit numerically. I note that this is the same function suggested by TheGhostOfPerdition in a comment.

Not the answer you're looking for? Browse other questions tagged kinematics acceleration estimation or ask your own question.

1
Formula for deceleration of a car with transmission disengaged

2
Finding acceleration for a car after finding torque
1
Acceleration of objects with speeds comparable to $c$. Can we find acceleration of the frame by treating $v$ in $1/\sqrt{1-v^2/c^2}$ as variable?
0
Calculating the motion of an object under a constant force in a relativistic context
0
Simulating trajectory of object in a non-uniform but static gravitational field
1
Is the car braking time formula $ T = v / (\mu_s \, g) $ valid only for uniformly accelerated motion?
1
Formula for deceleration of a car with transmission disengaged