Gases Expanding and Bonding in the Vacuum? Frozen Clouds

Why do gasses expand in space rather than attract forming a liquid? Do some gasses attract or bond when they get colder and what would be the characteristics of it in space? Would it be like powder snow or more like crunchy soft cloud that holds your shape as you effortlessly pass threw it? 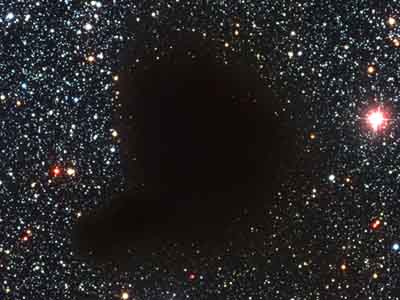 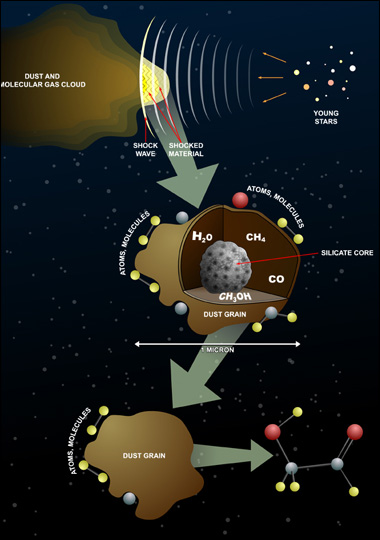 A gas is a collection of atoms or molecules that are constantly moving and colliding with each other.

Credit for this great visualization goes to Greg L at the English language Wikipedia.

If the bounding box were to disappear, the particles would escape in the direction they were previously travelling - which for lots and lots of particles would look like a uniform expansion.

So as you cool the gas, you decrease the $KE$ of the gas and decrease the average velocity of the particles $v$. If you keep cooling the gas, you will reach a point where some particles can no longer escape from the attractive forces and will start being bound. This is when you get a liquid.

Note: I've deliberately left lots of theory out of this for brevity, however for further reading you can check out: kinetic theory of gases, inter-molecular forces

It depends, but it probably won't be crunchy (that requires solids). Let's use water as an example. Starting with a gas, i.e. water vapour, it's like the air at low density, like humid air at medium density, and like clouds or fog/mist at high density. As you cool the water vapour, you'll begin seeing the water vapour condense - e.g. condensation on your windows, or rain droplets from a cloud. This is the water transitioning from a gas to a liquid. So from a gas to liquid it's like a cloud, and you would pass through it - not that you'd want to, it's cold and wet :(

This may be clearer if you think about the reverse, i.e. a liquid boiling into a gas. If you're boiling some water in a pan, you'll see steam coming off the surface of the water. The appearance of the steam depends on how much of it there is - a lot and it'll look like a cloud and start misting up the place, a little and you'll barely be able to see it.

Other gases behave roughly the same as water, but at very different temperatures, because the attractive and repulsive forces between the atoms have very different strengths. And you may never be able to see these other gases if they don't reflect visible light.

In a vacuum or empty space, there is no pressure holding the gas particles together, so the gas particles expand outwards, increasing entropy. The gas particles never naturally come close enough to bond into a liquid (or a solid), even though they're very cold. In the intergalactic medium right now, there is a very low density (10 atoms per m$^3$) ionised Hydrogen gas permeating space, that is both far too cold and far too sparse to become a liquid.

The state of a substance depends very much on its temperature.

There can be a change of state due to expansion that is how gas liquefiers work. A gas is compressed and then is allowed to expands rapidly. In expanding the gas does work against the surroundings and in separating the gas molecules so the average kinetic energy of its molecules drops ie it becomes colder. If this expansion is repeated many times then eventually the gas will liquefy.

In space the evaporation from the surface of any liquid which is formed is so great that the liquid very quickly either turns into a solid or into a gas.

Not the answer you're looking for? Browse other questions tagged gravity vacuum ideal-gas molecular-dynamics or ask your own question.

8
Vacuum and repulsive gravity
4
Can Kinetic Theory obtain fluids behavior?
0
Behaviour of gases in a vacuum
1
What would vacuum decay in an expanding universe be like?
1
Thermodynamics - Superheated vapor expanding into vacuum