Does it contradict special relativity that an electron beam in a television picture tube can move across the screen faster than the speed of light?

While looking at some exercises in my physics textbook, I came across the following problem which I thought was quite interesting:

It is possible for the electron beam in a television picture tube to move across the screen at a speed faster than the speed of light.

Why does this not contradict special relativity?

I suspect that it's because the television is in air, and light in air travels slower than light in a vacuum. So I suppose they're saying the the electron could travel faster in air than the speed of light in air, like what causes Cherenkov radiation?

This is an example of what is sometimes called the "Marquee Effect." Think of the light bulbs surrounding an old-fashioned movie theater marquee, where the light bulbs turn on in sequence to produce the illusion, from a distance, of a light source which is moving around the the marquee.

There is no limit on how short the time interval is between one light turning on and the next turning on, so the perceived light source position can move arbitrarily fast, but in fact nothing is actually moving at all.

In the case of the television screen, the phosphors on the screen can be lit in rapid sequence, but the electrons in the beam do not ever need to move at (or even near) the speed of light.

More generally, there are loads of examples of some imaginary or conceptual "object" moving faster than light, but in all these cases there is nothing actually moving at all. A classic example is the intersection point of two nearly parallel lines, which moves very rapidly as the angle between the lines changes. In this case it is obvious that the moving "object" isn't moving at all, but its still a good example of a case where you can discuss something moving faster than light without there being any violation of physical law.

This is a conflation of phase velocity, and group velocity. The beam can be seen to move from say left to right at higher than c, but no information or particles are traveling that fast. Information is being transmitted from the electron gun to the phosphor at well under the speed of light.

It has nothing to do with the media it is embedded in. The information is going from the electron gun to the screen, not from one location on the screen to another.

There is no contradiction in "processes" made up of sequences of independent events such as these because there is no causal relationship between the individual events - in this case the flights of the individual electrons and their ultimate collision with the screen - that make up the process.

If the screen is far enough from the source and the scan so fast then the sequence of electron collisions moves across the screen at faster than $c$. In this case, the order of the collisions on the screen is reversed when observed from an inertial frame moving fast enough against the direction of motion of the scan. This is simply a manifestation of relativity of simultaneity. But this is not a problem, because each of the electron flights is causally independent, and therefore there is no possibility of a violation of causality wrought by the frame's motion.

It is, however, a problem if the sub-events making up the process are causally related. This would be so if the motion were that of lone electron, where its being ($B$) at each instant is causally related to its being at any former instant ($A$) - $A$ is then a cause of $B$. One can then find a relatively moving frame, for example, where each electron would fly back into the cathode, undergo inverse thermionic emission and become a conduction electron again.

Indeed the above is the primary reason why we postulate that such faster than light motion is forbidden in relativity: it would violate causality and we make this postulate to uphold a causal description of the universe.

The electron beam in a typical television moves with a speed no higher than $ 10^6 \mathrm{m/s} $, which is much less than the speed of light. I wonder what building-sized cathode ray tube television the textbook author has access to if he's made that claim.

In any case, even if the beam did move faster than the speed of light, that wouldn't cause any problem. Quoting part of the treatment of going faster than light in the Physics FAQ, section 3. Shadows and Light Spots.

Think about how fast a shadow can move. If you project the shadow of your finger using a nearby lamp onto a distant wall and then wag your finger, the shadow will move much faster than your finger. If your finger moves parallel to the wall, the shadow's speed will be multiplied by a factor $ D/d $ where $ d $ is the distance from the lamp to your finger, and $ D $ is the distance from the lamp to the wall. The speed can even be much faster than this if the wall is at an angle to your finger's motion. If the wall is very far away, the movement of the shadow will be delayed because of the time it takes light to get there, but the shadow's speed is still increased by the same ratio. The speed of a shadow is therefore not restricted to be less than the speed of light.

Others things that can go FTL include the spot of a laser that has been aimed at the surface of the Moon. Given that the distance to the Moon is 385,000 km, try working out the speed of the spot if you wave the laser at a gentle speed. You might also like to think about a water wave arriving obliquely at a long straight beach. How fast can the point at which the wave is breaking travel along the beach?

Here's another example from Griffith's book "Introduction to Electrodynamics" which illustrates phenomena where what we see is not what we observe. The apparent speed can be much greater than the speed of light. This speed is just what we see, an illusion, and it's the result of our inability sometimes to see the actual direction of movement of an distant object w.r.t. us and the fact that the light needs some finite time to get to our eyes.

traveling faster than the speed of light. Many of these reports

observed--that is, from a failure to account for light travel time.

Here's an example: A star is traveling with speed $v$ at an angle $\theta$ to

the line of sight (Fig. 12.6). What is its apparent speed across the 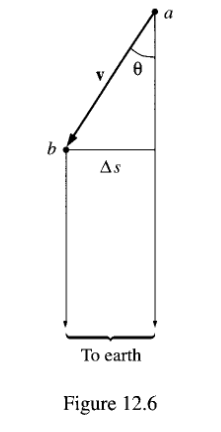 the signal from a, and the star has meanwhile advanced a distance $\Delta s$

across the celestial sphere; by "apparent speed" I mean $\Delta s/\Delta t$.) What

It can be easily shown that the apparent speed in this example is:

To find the angle $\theta$ that gives the maximum apparent speed we just differentiate and solve, for $\theta$, the equation:

Not the answer you're looking for? Browse other questions tagged special-relativity faster-than-light geometry causality or ask your own question.

-2
The speed of light and electrons

1
Reason for Nothing Moving Faster than the Speed of Light
2
How can the Alcubierre drive itself move faster than light?