Why does a coin falls faster when it's flipping as well?

From my experiments with measuring how fast a coin falls, I have consistently measured a faster falling rate for a coin that flips as it falls.

As an example, a coin dropping on its edge from height of $45 \:\rm{cm}$ hits the ground $20 \:\rm{ms}$ later than a flipping coin falling from the same height.

Now here's the catch: I use a microphone to mark the events. I drop the coin off the edge of a table letting it slightly brush off it. The bang noise of this event combined with the noise the coin makes as it hits the hard ground let's me measure the fall duration accurately (I hope). I also take into account the time it takes the sound of coin hitting the ground to come back up to the mic.

Using $\approx340\:\rm{m/s}$ for speed of sound and $9.806\:\rm{m/s^2}$ for acceleration due to gravity, my measurement of height is dead accurate, BUT only for a coin dropped on its edge. A flipping coin constantly gives me a measurement less than correct value.

First I suspected the air resistance, but if that was the case, shouldn't the coin falling on its edge fall quicker?

If I read the description correctly, your experiment is set up to impart an initial velocity to the coin before your timing starts - as you drop it from slightly above the edge of the table, but don't start timing until you hit the edge (hear the impact).

At the moment of impact, the center of mass of the coin will slow down a little bit - but it will still have some residual velocity. An example calculation:

If you drop the coin from distance $h_0$ above the table edge, it will have a certain velocity $v_0$ by the time it hits the edge. If you make a "perfect" hit between the edge of the coin and the edge of the table, the coin will start spinning while continuing to fall; for a coin with mass $m$ and radius $r$, the moment of inertia about the axis is $I = \frac14 m r^2$. The change in linear momentum $\Delta p$ will give rise to a change in angular momentum $\Delta L = r\Delta p$; conservation of energy tells us that the sum of rotational and translational kinetic energy after the impact are the same as before. Finally, the contact force will go to zero when the velocity of the edge of the coin is zero, so $r\omega_1=v_1$. We can now write conservation of energy:

so the coin will lose a fraction of its initial velocity when it hits the table. And then it continues to fall distance $h$.

Now a coin that starts with an initial velocity will reach the floor more quickly than a coin starting from rest. The time taken is obtained by solving

Substituting things in to find the effect on calculated height quickly gets very messy, but it's straightforward to plot the relationship between height above the table from which the coin was dropped, and calculated height difference (where the true value = 45 cm): 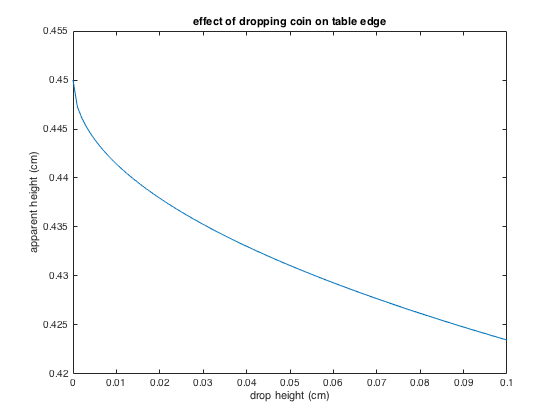 Note that the difference in calculated height is a fraction of the height from which you dropped the coin: \frac{-v+\sqrt{1+\frac{v_1^2}{2gh}}}{g}$$

Also note that the velocity of the coin when hitting the floor (approximately 3 m/s after a 45 cm drop) means that a 20 ms timing difference corresponds to a 6 cm difference in apparent height: that's a massive number.

I conclude that there is another problem with your setup that is not properly described - "something" you are not telling us, or some way in which you are not interpreting your data correctly... In particular I wonder whether your interpretation of the sounds as they relate to the start of the drop are correct. I would like to repeat this experiment using high speed video (most modern cameras and even phone can film 240 fps which should be plenty to see what is causing a 20 ms difference).

Not the answer you're looking for? Browse other questions tagged newtonian-mechanics rotational-dynamics projectile drag home-experiment or ask your own question.

2
Spinning, decelerating coin on a table
0
Looking at a falling person (vertically) from 60m to the surface, how much wind effect is going to be felt?
13
Do objects have a tendency to fall in their most aerodynamic position?
1
If we define downwards as the negative direction, can a falling object have positive acceleration?
31
Will a falling rod stay in contact with the frictionless floor?
0
Potential and kinetic energy of equal objects who have reached terminal velocity from different heights
0
Why do two similar objects not hit the ground at different times?
1
Conflicting intuitions about free fall