What is torsional vibration?

The same question applies to bending vibration, although I have an idea what that might be. I think it's when the rod physically bends into the shape of a standing wave.

If I do an experiment where ultrasound standing waves are generated in a copper rod, is the resulting vibration torsional, bending or (as I suspect) neither?

If you have a rod, there are three different ways you can try to distort it which can give rise to a wave traveling along the rod.

Where $G$ is the shear modulus, and $\rho$ the density of the material. This is non-dispersive.

For a longitudinal wave, you can find the analysis in the same lecture. It shows that the wave velocity is independent of the amplitude of frequency of the wave, and is given by

Where $\rho$ is the density, and $M$ the constrained modulus (related to the Young's Modulus $E$ and bulk modulus $B$ by $M=E+\frac43 B$ - see this). Again, this is non-dispersive.

For a transverse wave, the analysis is given in this paper which shows that the propagation is dispersive: that is, different wavelengths will propagate at different velocities, so a given distortion will not maintain its shape as it propagates along the beam.

If you have a conventional ultrasound transducer, it will produce a longitudinal pressure wave (type 2 above). 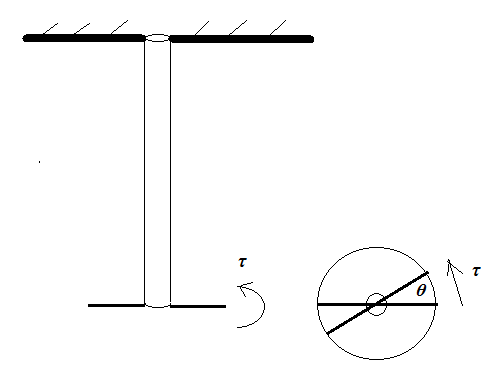 A regularly shaped metal rod is fixed at its top to a ceiling (or such like), so it cannot move. At the bottom of the rod we rigidly attach two strong and heavy handle bars, which allow to exert a torque $\tau$ to the rod.

As a result of this torque the rod now torsionally deforms, so that the handle bars are now at an angle $\theta$ with regards to their initial position. As long as the deformation is elastic (and not plastic, that is: for small $\theta$) we can write:

where $k$ is the torsional spring constant of the rod.

What happens when we suddenly remove the torque $\tau$? The rod and handle bars will enter into a simple harmonic oscillation, as follows.

For simplicity's sake we'll assume the rod to be massless and the inertial moment of the handle bars (with respect to the rod's central axis) to be $I$, then with Newton's Second Law (applied to rotation) we can write the equation of motion of the handle bars as:

Which has the well-known solution:

and $\omega=2\pi f$ where $f$ is the frequency of oscillation. Note for example that for a stiffer rod (higher $k$) the frequency is higher.

Remove the handle bars and replace the torque with a force acting on the end of the rod and perpendicular to it. Elastic deformation now causes the rod to bend. On sudden release something analogous to the above case happens. The rod will also enter into a simple harmonic (bending) oscillation with frequency derived from the equation of motion and the system's parameters (mass and stiffness). A real-life example is that of a tuning fork: when struck by the hammer it produces a pure pitch sine and by transmitting its oscillation to air, audible sound waves are formed.

Not the answer you're looking for? Browse other questions tagged waves vibrations or ask your own question.